Re Covid19, Sweden remains the enigma country that almost nobody wants to talk about, because the Swedish scientists may have been correct all along (although the Swedish bureaucrats certainly had significant shortcomings in the early months of the pandemic).

The first chart shows five waves of covid in Sweden. The first wave shows the high death rates characteristic of much of western Europe, though not of Germany or other Scandinavian countries. Sweden was particularly negligent in its case diagnosis. Then there was a winter rerun second wave, though this time not as bad as the other non-Scandinavian countries; and this time, with a much better testing regime in place.

As the second chart shows, Sweden’s deaths from Covid19 were overwhelmingly among people over 75 years old, many of whom would have died in 2020 had that been a normal influenza year.

Sweden’s statistics are clearly honest, although the bureaucrats can be slow to release them. The third wave – April 2021 – shows that Sweden now operates a very comprehensive testing regime. One problem with Swedish statistics, though, is that the general reporting of mortality by age seems now to be non-standard. Hence the age mortality data stops in August 2021.

The delta-strain arrived in Sweden in June/July 2021, and its impact can be seen in a very muted fourth wave. Looking at Sweden, ‘delta’ seems not to have been the big beast that blindsided New Zealand’s government in August.

Sweden has – as of 13 December – a greater proportion of the ‘omicron’ strain than most European countries (though less than Norway and Netherlands). The November/December covid outbreak in Europe is overwhelmingly a winter resurgence, driven in large part by waning immunity as well as by the seasonal impact of winter.

Before looking at Sweden’s Scandinavian neighbours, we may look at Poland, across the Baltic Sea from Sweden and Finland. Firstly, note the scale for Poland, maxing at 3,000 daily deaths per 100 million people (or 30 daily deaths per million). Next, we note that Poland successfully fended off covid’s first wave, as Germany (though to a lesser extent) also did.

We also note that Poland (and Germany and some others) had a surge in deaths in August. This is most likely the beginnings of a new covid wave, driven by the resumption of international travel. We see from Germany that there is typically a small summer epidemic during the peak travel season.

This August surge was contained in Poland, and most other affected countries. It was almost certainly confined to the more-affluent travelling public, and did not then hit the general population.

Then it hit Poland, in October 2020. Wham! Very similar to Spain in March 2020. Poland was completely unprepared. But, as in Spain, the deaths dropped of quickly in response the reactive public health measures. Poland’s general population had become very naïve to respiratory viruses in large part as a result of the first wave of public health measures.

This October 2020 wave was much more powerful in Poland than in Sweden where natural immunity was much higher. But this second wave lasted longer in Sweden; Sweden refusing to introduce any compulsory public health measures. (The one brief measure introduced in Sweden early in 2021 – masks on public transport – was never enforced.)

A new wave struck both Sweden and Poland in March 2021; this was linked to the British ‘alpha’ strain of covid. While Sweden had many cases, voluntary public health measures meant that Sweden had few covid deaths in April 2021. Poland, on the other hand, on tentatively relaxing its measures, got sideswiped a second time.

For both countries the impact in August 2021 of the delta strain of covid is apparent. In Poland, as in Sweden, it’s minimal. Both populations had a high degree of immunity. On vaccinations, Sweden was about average for West Europe. Poland, while less vaccinated, had high vaccination rates compared to much of East Europe.

Interestingly, New Zealand acquired Pfizer vaccines from Poland in August/September 2021; vaccines that Poland felt that it didn’t need. Poland did not have the delta-phobia that was present in New Zealand, and was driven in New Zealand by our innate sense of our heightened vulnerability.

We see that Poland subsequently got the pre-winter October 2021 wave of Covid19, though later than most of East Europe. There are signs that this wave in Poland has already peaked, at least with respect to deaths.

We don’t hear much about Finland. In 2020 it clearly had rumblings of covid, but was never affected anywhere near as much as its neighbours, at least until mid-2021. Of particular interest is that Finland put up the covid shutters proactively, ahead of the winter 2020/21 wave. No place in Finnish MIQ for Santa.

However we do see a significant rise in deaths in June 2021; probably postponed deaths arising from the reduction in deaths in prior months. But delta also hit Finland, although it is only the ‘excess deaths’ data that show this. Indeed Finnish official covid data has the look of being much less transparent than Sweden’s. Finland has caught the latest winter wave, and it seems likely that excess deaths for this month will show that Covid19 is presently much worse in Finland than even Finn’s themselves presently realise.

Finland, along with Denmark and Norway, in the last seven months performed much worse in the covid stakes than did Sweden.

Denmark used widespread public health restrictions to contain the pandemic in its first year (compare to Sweden). The early 2021 restrictions, albeit reactive rather than proactive as in Finland, are shown by the huge negative excess death ‘toll’. Delta however did make a much bigger impact in Denmark, and the present wave in Denmark is much bigger than in Sweden, despite Sweden having more ‘omicron’ than Denmark.

Norway is much like Denmark, though with negative excess deaths for the whole of the first 15 months of the pandemic. Like Denmark, ‘delta’ has had a big impact in Norway; and – as an ‘omicron’ leader – Norway has many reported cases this December. Further, the ‘delta winter wave’ – with delta, but due to the winter season and to waning immunity – hit Norway before both its reported covid cases and recorded covid deaths reveal. Covid19 deaths since July in Norway are substantially higher than the official data series reveals. 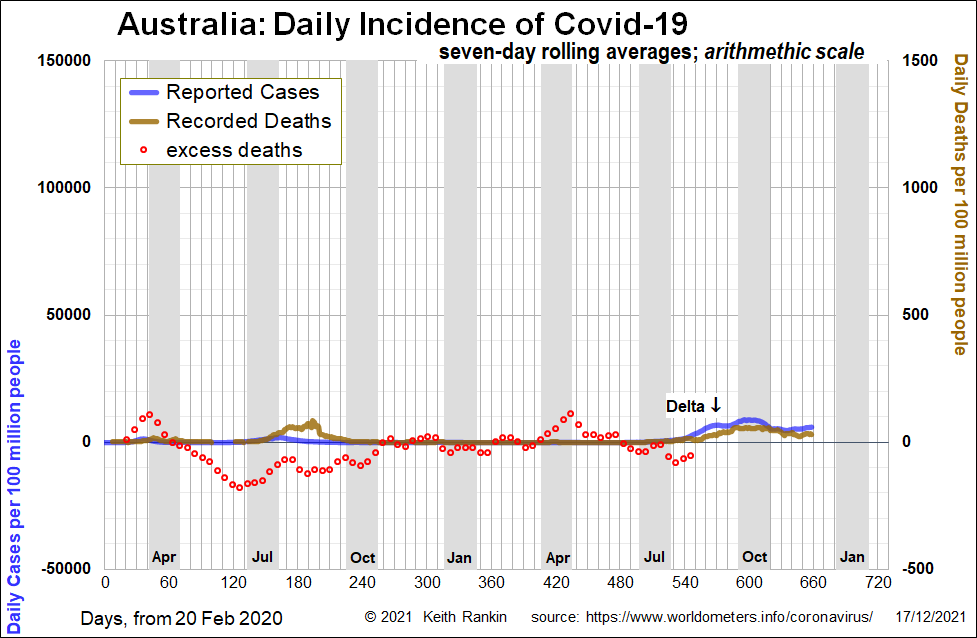 Australia is interesting because it is New Zealand’s neighbour, and because it has had, like most of Scandinavia, comparatively benign covid statistics. Like Norway, its general experience has been positively negative, meaning a negative death toll. Unfortunately Australia is particularly tardy with its total death data, so we cannot yet see the extent to which excess deaths may exceed official covid deaths.

One chart which is interesting for Australia is this chart of deaths by age group. Note that the data is not particularly up-to-date, and also note that this is quarterly average data, so is much more ‘smoothed’ than is the previous chart type.

What is very apparent, however, is that the covid public health restrictions did not reduce the mortality of the oldest Australians. Rather, the numbers in this age cohort who died in the first half of 2021 well exceeded the numbers who were saved by the 2020 lockdowns. (For a sense of what would have happened – the counterfactual – if Australia had not had covid public health mandates, look at the Sweden age data above.)

The other big question for Australia is: Did covid save many lives of Australians aged 15-84? So far, the answer is yes, although some Australians will argue that other costs of the restrictions will have exceeded the benefit of younger lives not lost. However, the jury is still out. Will 2022 (or 2023?) show death increases for Australians aged 15-84? Will a similar chart made in December 2022 show significant postponed deaths for these age groups, in line with what already shows for those aged over 85?

Monkeys’ brains are wired to read body language – just like ours