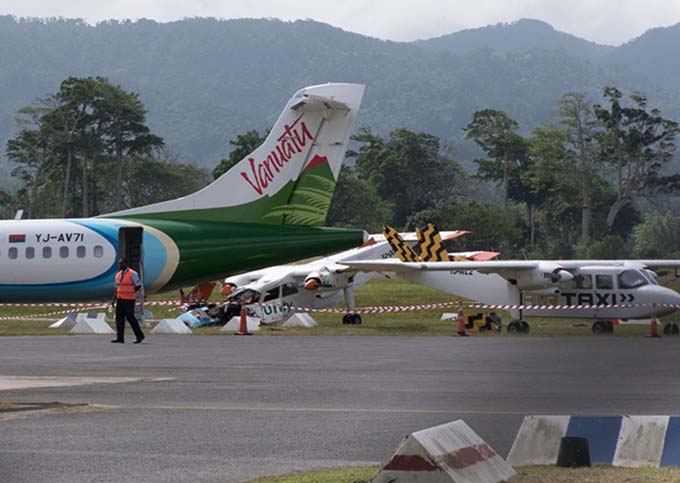 Nobody was hurt, but three commercial aircraft were damaged when an Air Vanuatu ATR-72 made an emergency landing at Bauerfield airport, Port Vila, today. Image: Dan McGarry/VDP

An Air Vanuatu ATR-72 made an emergency landing in Port Vila today. The aircraft, which had 39 passengers and 4 crew aboard, landed in a gentle tail wind.

According to a statement issued by Air Vanuatu Ltd, the aircraft “was involved in a runway excursion. The incident occurred at the end of the runway on landing”.

Neither the pilots nor the passengers on board suffered any injuries. The Civil Aviation Authority Vanuatu is investigating the incident.

The aircraft was inbound to Port Vila from Tanna. It apparently suffered loss of power to one engine as it overflew the island of Erromango, about 20 minutes away from Bauerfield airport in Port Vila.

Multiple sources told the Vanuatu Daily Post that there was smoke in the cabin when the aircraft landed.

“The cabin was filled with smoke from a fire below and they cut off the starboard engine mid flight. No oxygen masks dropped and visibility in the cabin was only a couple of meters and breathing was difficult.

“The plane went off the runway during the emergency landing and cut through the front half of a [Unity Airlines] plane before we stopped. We then (elderly included) had to jump down from the cabin with about a meter and a half drop.

“So relieved that everyone appears to be physically OK.”

The plane landed at 11am and after it had run a significant distance, it veered to the left, into an area in which several small charter aircraft were parked.

One plane belonging to Unity Airlines was a “write off” according to its owner. The nose section of the plane was obliterated, and there is a visible dent in one engine enclosure.

Another aircraft, operated by Air Taxi, suffered significant damage to its tail section. The owner of the aircraft told the Daily Post that she had not been allowed to approach her aircraft to assess damage.

“Air Vanuatu has advised all domestic and international services are continuing after the re-opening of Bauerfield airport.

“Passengers booked to travel on domestic services are advised to reconfirm their flights with Air Vanuatu by calling 22000.

“Air Vanuatu management is working closely with authorities to investigate the runway excursion of one of their ATR-72 aircraft.

“Chief Executive Officer Derek Nice has spoken with passengers and the operating crew of the flight and praised the crew for their professionalism and skill which contributed to no injuries from the incident.”

Staff refused to comment, except to confirm that an incident had occurred. They declined to confirm the number of aircraft involved or, curiously, whether airport operations were resuming.

They referred the newspaper to Air Vanuatu for this last piece of information.

Air Vanuatu Ltd later confirmed that the airport had reopened, and they confirmed that one flight, from Port Vila to Nadi, was cancelled. All other flights were going ahead according to schedule, they said.

The identity of the pilots on board the aircraft has not yet been released.

Dan McGarry is media director of the Vanuatu Daily Post group.This article is republished with permission.