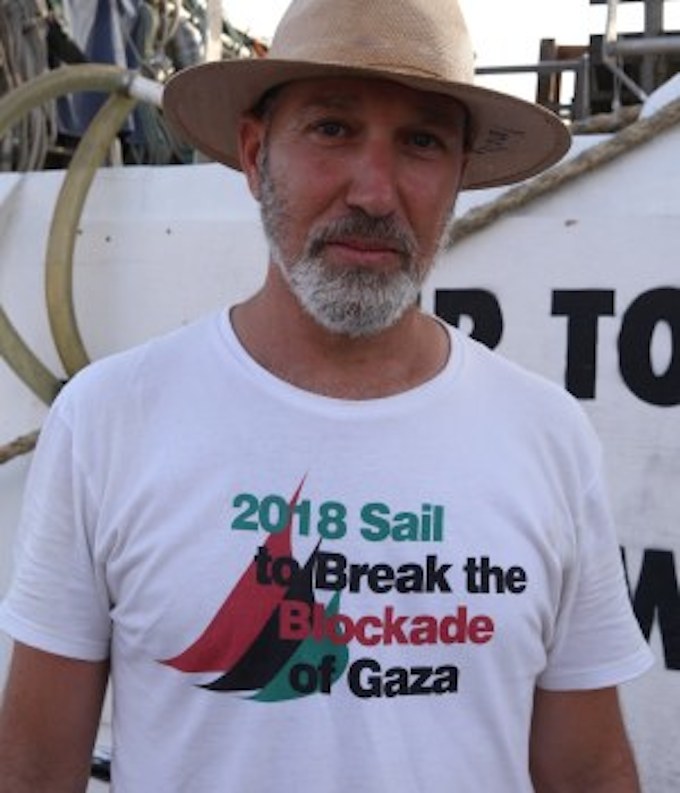 An open letter from former Israeli Air Force “rescue” pilot Yonatan Shapira on board the Al Awda bound for Gaza.

My name is Yonatan Shapira and I’m an Israeli citizen. I was a captain and a Blackhawk helicopter pilot in the Israeli Air Force.

I never shot anyone and was flying mostly rescue missions but nevertheless, I realised that I was part of a terrorist organisation.

Fifteen years ago in 2003 I organised a group of 27 air force pilots who publicly refused to continue to take part in the oppression of the Palestinian people.

Since then I’ve been active in different organisations that struggle against the Israeli occupation and apartheid. I am a member of Boycott from Within – Israeli citizens who support the Palestinian call for boycott, divestment and sanctions.

This is my fourth attempt to break the Gaza blockade from the sea.

My message to the Israeli soldiers who are now training and preparing to board our boats and arrest us:

“Think about what you will tell your grandchildren in many years from now and not about what your friends will say about you today.

“Refuse to take part in this ongoing war crime. Refuse to continue murdering people who are locked in the biggest prison in the world.

“I was once one of you and I know that among you there are some who can still think.

“Refuse to be the guards of the Gaza ghetto.”

Israel’s Ambassador to the United Nations, Danny Danon, has warned the body that his country “will use all necessary measures to protect its sovereignty should the flotilla with 45 peace activists, parliamentarians, trade unionists and journalists now sailing to Gaza from Norway attempt to breach the illegal Gaza blockade.

The Freedom Flotilla coalition includes members from 15 countries – among them Mike Treen from New Zealand – and began the sea voyage on May 15.