The media freedom monitoring group Reporters Without Borders details how it has trained journalists in Afghanistan to be aware of double suicide bomb attacks. Video: Euronews BRIEFING: By David Robie Monday – just three days before today’s World Press Freedom Day – was the deadliest day for news media in Afghanistan in 17 years. The killing of nine journalists and media workers among 26 people who died in dual suicide bomb attacks in Kabul was the worst day for the press since the fall of the Taliban. Five other journalists were wounded and a 10th journalist was shot and killed in a separate attack outside the capital. Among the dead was Agence France-Presse chief photographer Shah Marai who left behind an extraordinary legacy of images. READ MORE: Hatred of journalism threatens democracies It was the also the most horrendous day for global media too since the Ampatuan massacre on the southern Philippines island of Mindanao on 23 November 2009. A shocking 32 journalists were murdered that day, most of the total death toll of 58 in an ambush on a pre-election cavalcade. To date nobody has been successfully brought to justice. The scores of private militia “owned” by the Ampatuan family alleged to have carried out the killings have got away with their vile crime almost scot-free. However, some suspects have been detained and others are out on bail. Also, a military task force has launched a massive disarmament programme in Maguindanao province in a bid to curb vendetta-driven crimes. High-powered weapons Twenty two high-powered weapons were handed in by the local mayor of an Ampatuan clan bringing the number of 439 firearms either “recovered or surrendered in Maguindanao and Sultan Kuarat in the past four months. The Ampatuans handed over nine M79 grenade launchers, six Barret rifles, a rocket-propelled grenade launcher, a mortar, an M16-A1 rifle, a Garand rifle, one Uzi and one carbine. Eight years after the Ampatuan killings, of the 197 men originally accused, only 13 have been brought before the court for judgement since the start of proceedings in January 2010 and more than 250 witnesses have been heard. “It’s supposed to be the trial of the century. Yet eight years later, no convictions have been made in the Maguindanao massacre cases … the worst case of election-related violence in the Philippines,” writes Rappler journalist Sofia Tomacruz. 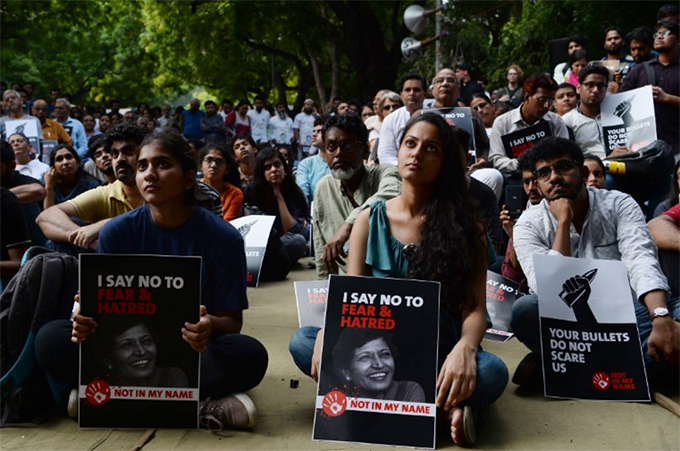 The “I say no to hatred” photo in India on the cover of IFJ’s 2018 “Clampdowns and Courage” end impunity report. Image: IFJ Asia-Pacific has clearly become the most dangerous region for journalists. More specifically, South Asia, according to a new International Federation of Journalists report that is being launched today. The report, entitled Clampdowns and Courage: Press Freedom in South Asia 2017-18, says that a total of 33 journalists lost their lives across South Asia in the year ending April 2018, making it “the most dangerous region in the world for journalists”. The latest attacks underscore the global targeting of journalists and the impunity that most of their killers enjoy. ‘Justice is elusive’ “In most of the cases of killing of journalists in South Asia, justice is elusive, says the IFJ. “The 33 journalist colleagues whom we lost this year add to a long list of hundreds of slain journalists awaiting justice after being killed for carrying out their professional duties. The struggle for justice is a challenging process, and in many cases the process doesn’t even begin.” The IFJ’s report highlights the case of leading editor Gauri Lankesh who was among the slain journalists. “She was shot dead in Bengaluru in India in September 2017,” recalled the IFJ. “Despite repeated commitments from authorities, it took six months to nab an accused, the suspected supplier of firearms where the actual shooters are still at large.” The IFJ says in its report that more than 30 journalists have been killed over the past decades in India while doing their professional work. Last week, the Paris-based Reporters Without Borders warned over what it described as a “growing animosity towards journalists” around the globe. “Hostility towards the media, openly encouraged by political leaders, and the efforts of authoritarian regimes to export their vision of journalism pose a threat to democracies,” says the media freedom agency. The line separating verbal violence from physical violence is dissolving, says RSF. Assassination threat In the Philippines (falling six places to 133rd in the RSF World Press Freedom Index), President Rodrigo Duterte “not only constantly insults reporters but has also [has] warned them that they ‘are not exempted from assassination’. In India (down two places to 138th), “hate speech targeting journalists is shared and amplified on social networks, often by troll armies in Prime Minister Narendra Modi’s pay”. In both countries, says RSF, at least four journalists were gunned down in cold blood in the space of a year. Also in the Philippines, encouraged by the aggressively anti-media stance of their president, the Congress initiated a “good news only” clampdown on the media reporting about the lawmakers barely a week before Media Freedom Day. Reporters in the House of Representatives have protested against the new media accreditation rules that demand only positive coverage of the Congress, the lawmakers and its officials. A 19-page draft policy statement distributed by the accrediting agency Press and Public Affairs Bureau (PPAB) says it seeks to ban journalists who “besmirch the reputation” of Congress, its officials and members. Breaching a proposed six-point list of violations will mean cancellation of a journalist’s press identity card and being barred from covering Congress. Ironically, the Philippines is also taking advantage of a Chinese agreement to help develop the infrastructure for government broadcasting system and has indicated it is “with China” in its approach to the freedom, of the press just when RSF has warned the Asia-Pacific region of Beijing’s impact on the media. RSF says the Chinese model of state-controlled news and information “is being copied” in Asian countries. A warning too for the Pacific. 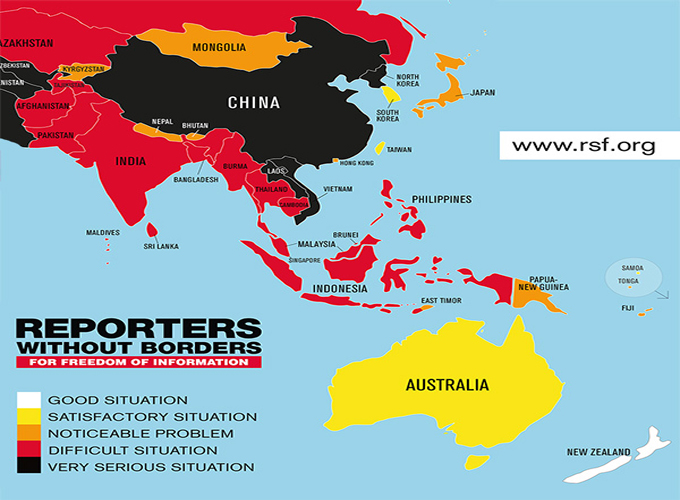 Graphic showing RSF Index 2018 Asia-Pacific region freedom rankings. Image: RSF Pacific issues In the Pacific, both Tonga (51st) and Papua New Guinea (53rd) have dropped two places, and Samoa one place (22nd). The biggest climbs were by Fiji (up 10 places to 57th), New Zealand (five places to 8th) -back into the top 10 globally – and Timor-Leste three places to 95th.  Solomon Islands was unranked while Australia remained on 19th (mainly due to the concentrated media ownership in that country). Other Oceania nations were not cited. This is especially surprising about Vanuatu, where the local newspaper Vanuatu Daily Post has been a leading example of press freedom and courageous journalism for a few years. Although interest remains high about West Papua in the Pacific, the region is “lost” in the RSF ranking for Indonesia (which remains unchanged at 124th). President Joko Widodo is accused of “breaking his campaign promises” with his presidency marked by “serious media freedom violations, including drastically restricting media access to the Papua and West Papua provinces (the Indonesian half of the island of New Guinea), where violence against local journalists continues to grow”. In Fiji, where the “chill” factor is still strong, the big test will come with the second post-coup election likely to be in September. While acknowledging a modest freeing up of the media with the 2014 election, RSF says: “The media are nonetheless still restricted by the draconian 2010 Media Industry Development Decree and the Media Industry Development Authority (MIDA) that it created. Violating the decree is punishable by up to two years in prison and the MIDA’s independence is questionable.” However, New Zealand should not be too smug about its return to favour in the top 10 of world press freedom nations (due to the Commerce Commission’s rejection of the proposed merger of Fairfax and NZME with the threat to plurality). RSF says there are still political pressures: “The media continue to demand changes to the Official Information Act, which obstructs the work of journalists by allowing government agencies a long time to respond to information requests and even makes journalists pay several hundred dollars for the information.” While the threats to media freedom in Oceania remain fairly benign compared with much of the rest of the world, vigilance is needed. And there is a challenge to journalism schools in New Zealand and the Pacific. They ought to put far more resources and teaching strategies into addressing how to keep young journalists safe in an increasingly hostile world for the media. Dr David Robie is convenor of the Pacific Media Centre’s Pacific Media Watch freedom project.

The UNESCO map of WPFD events – the only one indicated in Australia or New Zealand is at AUT. Link to the interactive map.