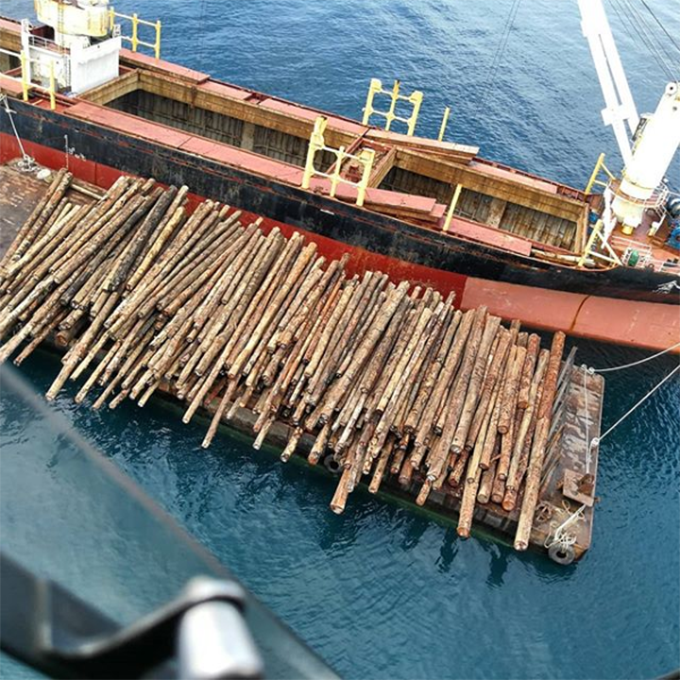 “When fully laden, a ship like this leaves Papua New Guinea shores every week with stolen forest resources. Shipped by transnational criminal cartels posing as developers. When filled, one of these shipments rakes in between K6 million and K7 million for the pirates … every week.,” writes Governor Juffa on Instagram. Image: Juffa/Instagram

By Scott Waide in Port Moresby

Over the course of the past month, Oro Governor Gary Juffa has been at the forefront of a crackdown on illegal loggers in Collingwood Bay of Oro Province.

The operation has gathered a lot of public support from people who have been subjected to various injustices, including company workers and landowners.

Up to 16 foreign workers have been arrested. Police have also impounded machines and other equipment.

“They were in fact quite relieved that we got to them,” Juffa said. “Apparently, they had not been paid.”

According to the Oro Governor, the Forest Minister cancelled permits to the operation.

However, the operation is still continuing with logs being shipped out of the province.

Theft of resources’
Juffa has also hit out at the PNG Forest Authority for its complacency:

“Our investigations reveal that PNGFA is negligent in its efforts and has been facilitating the theft of our forest resources for decades.

“It is complicit in the transnational crimes being committed and those who process the paperwork are in fact accomplices.

Collingwood Bay was one of the first areas marked as a Special Agriculture Business Lease (SABL). Landowners protested and took the matter to court and won.