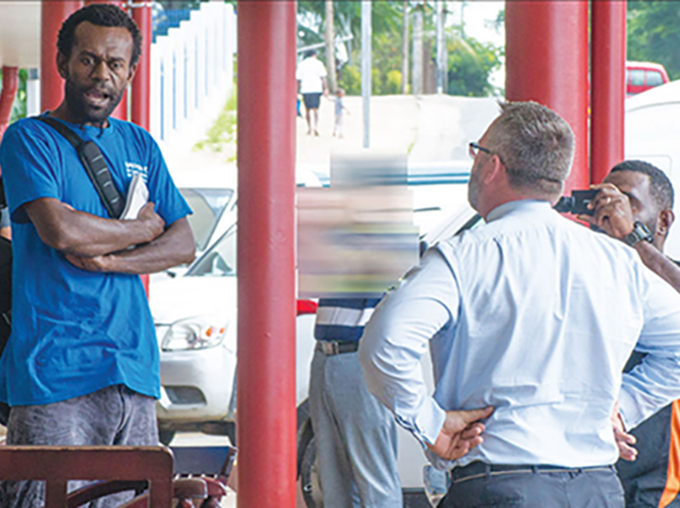 Australian-born lawyer Dane Thornburgh, who has offices in Vanuatu and Australia, employed bullying tactics yesterday morning in a tense confrontation with local journalists.

Thornburgh accused a veteran Vanuatu Broadcasting and Television Corporation (VBTC) journalist outside the Magistrates Court of trespassing on his property.

Thornburgh was seen speaking hands on hips with Richard Nanua, who later told the Vanuatu Daily Post that Thornburgh claimed to have seen him trespassing on his property yesterday morning.

This was flatly denied by Nanua. The VBTC journalist confirmed that this was not the first time he had been confronted by the lawyer.

In December 2017, when Nanua was employed at the Daily Post, Thornburgh wrote to a lawyer acting for the newspaper, alleging that “both Ms Jackson and I have been followed around lately by a mysterious person.”

It transpired that Nanua was being accused of stalking behaviour for his presence at the Magistrates Court and other work-related places.

Thornburgh threatened to file for a restraining order at that time, but failed to do so.

Prior to the argument with the VBTC staff, Thornburgh was seen in an intense discussion with the Public Prosecutor outside the Magistrates Courtroom, opposite the Vanuatu National Provident Fund (VNPF).

Close range photos
When Daily Post media director Dan McGarry arrived at the court compound with his camera, an unhappy Thornburgh and Jackson approached him and captured photos of him at a very close range.

The Australian lawyer who is practising law in Vanuatu was reported by the Daily Post to be allegedly implicated in the act of extortion contrary to section 138 of the Penal Code Act [CAP 135] which carries up to 14 years imprisonment as its maximum penalty.

Jackson is facing one count of complicity to extortion, contrary to section 3 and 138 of the Penal Code Act [CAP 135].

Yesterday morning, Thornburgh sought request from Senior Magistrate Moses Peter for non-publication on March 22, 2018, with reasons to exclude media coverage, particularly from the Daily Post. The application was approved by Senior Magistrate Peter.

The preliminary inquiry into this case has been adjourned to April 3, 2018.