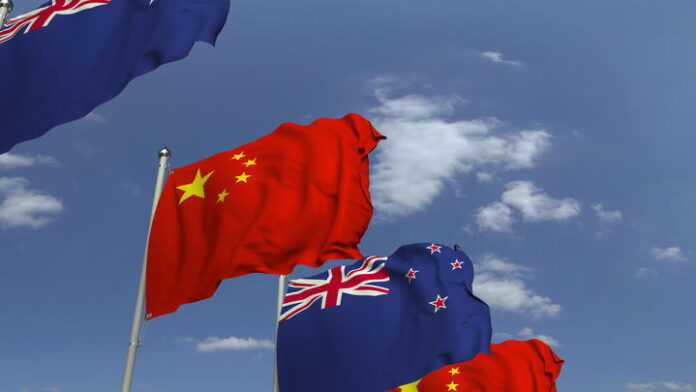 Today’s speech by Jacinda Ardern to the China Business Summit in Auckland was full of soothing words for Beijing.

The headline-grabber was Ardern’s comment that ‘a few plans are afoot’ for New Zealand ministers to return to China – and that the Prime Minister herself hopes to return to the country ‘to renew and refresh in-person connections’.

This might come sooner than we think. While China’s current elimination approach to Covid-19 heavily restricts in-person travel, New Zealand’s own experience shows how quickly these settings can change. After abandoning its own zero-covid policy, New Zealand this week fully re-opens to all visitors.

Expressing a willingness to travel to China – even if it is not currently possible to so – is a signal in itself.

A recurring theme during Ardern’s speech and the subsequent Q&A was the importance of marking this year’s 50th anniversary of diplomatic ties between Beijing and Wellington.

Calling New Zealand’s relationship with China as ‘one of our most important’, Ardern pointed to the ‘long history of engagement, and of beneficial interactions between our governments, our people, cultures and in commerce’.

Indeed, throughout the speech, Ardern was mild with her criticism of China and optimistic about the health and future of the bilateral relationship.

This does not mean that the speech was entirely a one-way street – Ardern said that New Zealand would continue to ‘speak out’ on contentious issues such as ‘economic coercion, human rights, Xinjiang and Hong Kong’.

But none of this was new – Ardern has cited these same issues in similar speeches before. And in the context of an address that was overwhelmingly positive towards China, the enumeration of the thorny issues on which Beijing and Wellington do not see eye-to-eye felt more like an obligatory recitation than a serious attempt at criticism.

In the speech itself, Ardern made only a single reference to Taiwan, on which she called New Zealand’s approach ‘consistent’ – a rather placative word she also deployed at several other times during the speech. But unsurprisingly, the Taiwan issue also topped the Q&A session afterwards, especially in relation to rumours of a potential visit there this week by US House of Representatives Speaker Nancy Pelosi.

In response, Ardern noted that ‘dialogue and diplomacy remain key’. And she continued to deploy these and other China-friendly phrasings – such as ‘de-escalation’ – to stave off the more sensitive sections of the interactive session. These very tactical ‘d-words’ also made multiple appearances in the speech itself.

Taken as a whole, then, Ardern’s speech seemed to strike a softer and friendlier tone towards China than might be expected given the overall deterioration in bilateral relations between Wellington and Beijing this year.

Of all of New Zealand’s shifts towards the West this year– and there have been many – Beijing seemed most irked by the Prime Minister’s participation at the NATO summit in Madrid in late June and by the hawkish joint statement issued after Jacinda Ardern met Joe Biden in the White House at the end of May.

Both actions met with swift and sharp rebukes from China. While Beijing imposed no further penalty, there is no guarantee that New Zealand will keep escaping punishment if it continues down this bolder path.

Of course, Jacinda Ardern is adept at tailoring her speeches to her audiences. Today’s summit would have always been a chance to express a more China-friendly position. After all, Wang Xiaolong, China’s Ambassador to New Zealand, was listening in the front of the audience – and Ardern greeted him as she left the stage.

Still, the Prime Minister’s speech today continued an attempt at rhetorical recalibration that seemed to begin with her addresses in early July to Chatham House in London and the Lowy Institute in Sydney.

In London, Ardern defended China’s right to be involved in the Pacific and talked up the need for diplomacy and dialogue. In Sydney, she rejected the idea of a ‘democracy vs autocracy’ contest in the aftermath of Russia’s war on Ukraine.

Ardern’s Lowy Institute speech also heavily emphasised the notion of New Zealand having an ‘independent foreign policy’ – the phrase or variations of it were deployed no fewer than seven times – and her address to the China Business Summit today continued this theme.

Noting once again that New Zealand aimed to be ‘consistent’, Ardern said the country had for ‘decades’ adopted a ‘fiercely independent foreign policy driven by our assessment of our interests and values’.

This will go down well with Beijing: several recent official Chinese statements on the bilateral relationship have approvingly cited the phrase. The embassy’s account of a virtual meeting held between Chinese foreign minister Wang Yi and his New Zealand counterpart Nanaia Mahuta in mid-June – when tensions were particularly high – cited Beijing’s ‘respect for New Zealand’s independent foreign policy.’

China’s liking for the phrase is not without good reason. After all, the origins of the ‘independent foreign policy’ lie in New Zealand’s rift with the United States in the 1980s over the Fourth Labour Government’s nuclear-free policy.

Wellington may have largely patched up its relations with Washington since then, but New Zealand has never been fully reintegrated into the ANZUS defence alliance – a situation that Beijing would no doubt like to see continue.

The theme of the China Business Summit this year is ‘A Balancing Act’. And certainly, the softer line on China today and in recent speeches could be driven by a realisation on the part of Ardern that New Zealand had gone too far with its pro-Western foreign policy in the first half of the year.

The bigger international picture might also provide an opening for a less hardline and more nuanced approach to relations between East and West. In July, Wang Yi signalled a potential thaw in tensions with Australia, saying ‘the Chinese side is willing to take the pulse, recalibrate, and set sail again’. And Joe Biden’s virtual meeting with Xi Jinping last week was the first direct communication between the pair since March.

Of course, this positivity over rhetoric needs to be set against the substance. And on that front, the picture looks rather bleak. After all, Xi used his phone call to tell Biden ‘if you play with fire you get burned’ – a reference to the rumours that Nancy Pelosi will visit Taiwan this week.

Against this grim global backdrop, Ardern’s more generous, critical friend approach towards China will be popular with Beijing.

But time will tell whether it is anything more than just talk.

Geoffrey Miller is the Democracy Project’s international analyst and writes on current New Zealand foreign policy and related geopolitical issues. He has lived in Germany and the Middle East and is a learner of Arabic and Russian.

Other items of interest and importance today

CO-GOVERNANCE AND DEBATES ON RACE
Deena Coster (Stuff): ‘White anxiety’ and the quest for power-sharing in Aotearoa
Deena Coster (Stuff): The idea of sharing power in Aotearoa doesn’t need to be scary
George Driver (North & South): The Fate of our national estate
Elizabeth Rata: In Defence of democracy
Anthony Poole (Open inquiry): It’s time to speak up against the New Racists
Wilhelmina Shrimpton (Today FM): Let’s stop racism before it starts

IMMIGRATION AND BORDER:
Kelly Dennett (Stuff): New Zealand is fully reopening to the world, but how prepared are we?
Chris Hyde (Stuff): What will a near-fully reopened New Zealand look like?
Glenn McConnell (Stuff): The ‘Immigration Rebalance’: What it is and why it matters