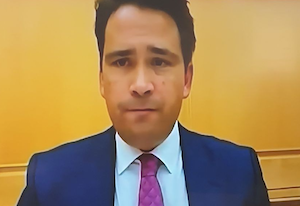 The thin veneer of a seemingly robust New Zealand media was ripped off like a plaster on a scab in front of Parliament’s Epidemic Response Committee today exposing its frailties.

The heads of all New Zealand’s media companies appeared via Zoom and all spoke of the desperate times ahead.

READ MORE: Media rescue package needed to save industry ‘on its knees’

What was unusual was that all reported that their audience and readership numbers were “skyrocketing” because people needed factual news, whether it was digital readership, broadcast or television.

However, advertising revenue was at a nadir and that is what was hurting the media owners.

Former New Zealand Herald editor and media commentator Dr Gavin Ellis in his opening submission said advertising revenue for media companies was estimated to drop between 50 and 75 percent, and there was concern that it would not return even after the Covid-19 pandemic crisis was over.

“Magazine publishers are indispensable gurus of our unique culture and our habitat, they’ve got to be urgently granted as an essential business status,” he said.

“The government really needs to adopt a three-stage process to deal with the media systems,” he said.

“The most immediate need is to help them recover some of that cashflow through diverting already committed government enterprise spend for example suspending regulatory and transmission costs for broadcasters, there is a large number of things that can be done.

“In terms of magazines, just let them publish, post-lockdown government needs to fast-track media restructuring or buying media to find long term solutions and really fast-tracking, sidestepping the Commerce Commission and the process that exist even for distressed businesses,” he added.

He backed the proposed merger of Stuff and NZME to buy them some time.

“There is a number of ways the government can make these businesses more attractive by changing the tax status,” Dr Ellis said.

“And finally stage three is the post Covid-19 reconstruction, it needs a total rethink redefining the media ecosystem and replacing outmoded ownership structures with a more sustainable model.”

“The bottom line is there will be contractions.

“I am fearful if the financial standing of the owners of MediaWorks and Stuff decline sufficiently they may be minded to follow Bauer and simply close New Zealand operations,” he sounded a warning.

In response, the Minister for Broadcasting, Communications and Digital Media, Kris Faafoi, said “the government is developing a short-and-long-term package for support to the media industry to deal with the challenges they identified.

“I’ll be able to hopefully announce those next week but the Prime Minister, Jacinda Ardern, said the first tranche of support for struggling media companies would be announced next week.

At the same time, she defended advertising on social media, saying that’s where New Zealanders were.

Next up at the Committee hearing was Sinead Boucher, the CEO of Stuff, who admitted the company, with the largest website, faced nervous times.

She said ongoing government support was necessary – either through New Zealand on Air or through other mechanisms – because advertising revenue has “dropped off a cliff”, more than halving in the weeks since March and looking “particularly dire” for April.

Like all those who appeared, she said the government should shift its advertising from social media giants like Facebook and Google to New Zealand media companies, and also consider special tax breaks.

Shayne Currie, managing editor of NZME, again pressed for being allowed to purchase Stuff, something which the Commerce Commission has rejected previously.

“We believe there is a sustainable model there and at the same time it will allow us to be equally strong,” Currie said.

“I like the moves that just have been announced in France – and France is the first major country which has moved in this direction – and I think Australia will follow very quickly.

“Last week, it was announced that France has ordered Google, and targeting Google in the first instance, they now need to start negotiating with media companies to pay them for the content that appears on their search engines.

Moving ahead
“That is a really significant move and I think the Australian Competition and Consumer Commission (ACCC) is certainly making similar recommendations along those lines.

“They are moving ahead this year and it can’t come soon enough in New Zealand,” he said.

As Kevin Kenrick, the TVNZ CEO, pointed out: “I will just reinforce every dollar the government spends on Google and Facebook is a dollar that is not spent supporting local media by New Zealand.”

Michael Anderson, who said several people at Mediaworks had been tested for Covid-19, said the difference between TV3 and TVNZ was that TV3 had debts that they had to pay back.

Meanwhile, in Australia the announcement of almost A$100 million in federal funding and support for regional newspapers and broadcasting during the coronavirus crisis is welcome but a long-term plan is needed to ensure the sector’s future, says the union for Australia’s media workers.

The Media, Entertainment & Arts Alliance (MEAA) welcomes the belated support for regional media in the form of a $50 million Public Interest News Gathering programme and tax relief for commercial TV and radio.

This comes after the closure of more than a dozen publications around the country due to reduced advertising revenue due to the pandemic, the statement read.

MPs ‘understand what is at stake’
It prompted the Journalism Education Association of New Zealand (JEANZ) president Greg Treadwell to say: “The Australian government has moved to help the news media and I expect the NZ government to do the same.

“It was clear, I thought, during the media company representations to the pandemic committee today that MPs understood the importance of what was at stake. That was something of a relief, to be honest.

“Media bosses, too, seemed to understand their long-running struggle for financial security has just changed fundamentally in nature. In the background was some of the regular positioning we’ve seen from the various players over recent years – for example, Mediaworks’ resentment that a state-owned company, TVNZ, eats up much of the commercial advertising dollar.

“But in the foreground was the urgent need to create enough security to enable the serious job of public communications to be done well. After all, these politicians will need the media with an election looming,” he added.

He said he thought that the NZME-Stuff merger was probably “on again” because there was “little chance of both thriving now, if there ever was”.

The committee appeared “pretty keen” on the idea that there was “no possibility of a plurality of voices if there was not first economic sustainability in a market model”.

“In other words, actually existing diversity is, in the end, treated as a nice-to-have,” Dr Treadwell said.

“I think one of the main messages today was that the market shouldn’t be killed off in an attempt to save it.

“The work done on developing new models like The Spinoff, Newsroom and BusinessDesk, should not be lost in the rescue.”