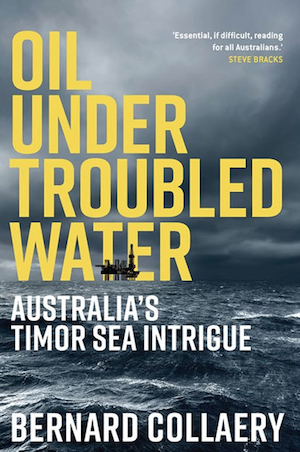 The Australian lawyer who helped uncover the Timor-Leste bugging scandal says Australia had direct, advanced knowledge of the threat that faced the murdered Balibo Five journalists, with a report describing the men as a “hurdle to be got over” in keeping clandestine activities secret.

Bernard Collaery has published what he describes as a “a survey of failed Australian policy” towards its much smaller neighbour. In Oil Under Troubled Water, he describes seven decades of “grim” history, including the Indonesian occupation years he pointedly labels “genocide”.

“I’ve not called it a holocaust, I wouldn’t use that term… [but] when there is a reckless starvation of people, it is close to, and [it] is genocide,” he told Tatoli.

The release of the book comes as Collaery and the former Australian Special Intelligence Service (ASIS) officer known as Witness K face criminal prosecution for their role in exposing the bugging of Timor-Leste’s cabinet rooms during sensitive oil and gas treaty negotiations in 2004.

The claims about Australia’s high-level knowledge of the impending Balibo attack come in a report which Collaery uncovered in the UK National Archives, where he spent some time researching the book. It highlights the information-sharing between Australia and Indonesia’s intelligence agency, then known as Bakin, in the lead up to the December 1975 invasion.

In his report, Britain’s then-Ambassador to Indonesia, John Ford, writes “the only limitation on clandestine activity now appears to be of its exposure”.

“A particular hurdle to be got over is a plane load of Australian journalists and politicians who are due to visit Timor… to investigate allegations of Indonesian intervention,” Ford writes. “The information from the Australians is sensitive and should not be played back to them or repeated to other missions.”

For Collaery, who advised the East Timor resistance for more than 30 years and has represented the families of the murdered Balibo Five, this was a “shocking” candour.

“[The Whitlam government] could hardly warn the Australians… that Indonesian special forces were a danger to them without conceding that they were aware that clandestine activities were happening inside Portuguese Timor,” he writes.

“So, rather than save lives, they saved the relationship with the Indonesian intelligence service, clearly.”

The report undermines the official version of events leading up to the Balibo attack. A 2002 Parliamentary report found another intelligence agency, the Defence Signals Directorate, did not have “intelligence material that could have alerted the government to the possibility of harm to the newsmen” and that “there was no holding back or suppression of data”.

‘We will not press you on the issue’: Kissinger
Collaery also quotes a US State Department transcript of a meeting between Secretary of State Henry Kissinger and Indonesian General Suharto on December 6, 1975 he said betrays a “profound breach” of the United Nations charter.

“We want your understanding if we deem it necessary to take rapid or drastic action [in Timor],” General Suharto said.

“We will understand and will not press you on the issue. We understand the problem you have and the intentions you have,” Secretary Kissinger replied.

The day after the conversation, Indonesia invaded Dili and began its 24-year occupation of Timor-Leste.

“[And] it’s a breach of the code by the United States as an accessory to that series of war crimes,” he says. Australia, as “a more silent witness”, was also complicit, he adds.

‘It’s ruined my law practice… they would have known that’
The book carefully skirts around the criminal proceedings Collaery faces for legal reasons.

A well-known Canberra barrister, former ACT Attorney-General and diplomat, Collaery took the former ASIS agent Witness K on as a client in 2013. After learning of the bugging operation, Collaery had arranged for his client to give evidence at a confidential overseas hearing.

But after news of the bugging operation was reported in the Australian media, the country’s domestic spy agency, ASIO, raided the lawyer’s home, seizing documents and data. ASIO also raided the home of his client, and had his passport cancelled, preventing Witness K from attending the hearing.

In protest, Timor-Leste unilaterally withdrew from the 2004 CMATS Treaty and took the case to the International Criminal Court in The Hague, with Collaery representing them. The case was subsequently withdrawn, and the two countries resolved the dispute through mandatory conciliation in early 2018.

Months after the treaty was signed, Collaery and Witness K were charged under the Intelligence Services Act of 2001. The Act criminalises the unauthorised disclosure of certain information about ASIS, Australia’s foreign spy agency.

Collaery is frank about how the prolonged case has affected his life.

“It’s ruined my law practice… I live on borrowed money, I can’t practice as an advocate in court, I’ve had to let my staff go. That’s all predictable and [prosecutors] would have known that,” he says.

“Through their love, their solidarity with the Timorese people, they put the people of Timor ahead [of their own lives],” he says.

Gusmão says he appreciates the serious legal risks the pair ran in exposing the bugging operation.

“I think Bernard Collaery and Witness K [were] prepared for this, but [they] should not be used as a deterrent,” he says.