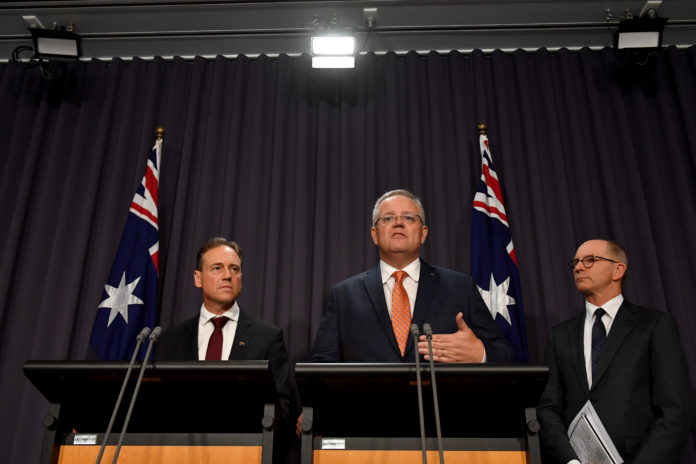 The Morrison government has announced a funding partnership with the states expected to see A$1 billion extra spent to deal with health costs around the coronavirus.

Scott Morrison said the Commonwealth would provide money on a matching 50-50 basis.

The federal government “will pay 50% of the additional costs incurred by state and territory health services as a result of the diagnosis and treatment of patients with COVID-19, those suspected of having the virus or activities to prevent the spread of it,” Morrison and Health Minister Greg Hunt said in a statement.

The support will be available for services provided in public hospitals, primary care, aged care, and community health care such as health services in child care.

The federal government is putting in an initial $100 million. While the estimate is that the likely cost to the Commonwealth will be around $500 million, there will be no cap and it could exceed that.

Morrison told a news conference: “It’s a demand-driven arrangement – the costs will be what the costs are.

“But we are estimating, based on the advice we have at the moment, that this could be as much as about a billion dollars, $500 million each. … I hope it’s not that much. It could be more”.

The 50-50 arrangement is a better deal than the states get from the Commonwealth for their hospitals, which sees 45% of the funding come from Canberra.

Details of the deal with the states will be tied down by the time the Council of Australian Governments meets on Friday, when the coronavirus situation will be at the centre of discussion.

By then the Morrison government is expected to have announced its fiscal package of billions of dollars aimed at protecting jobs and businesses hit by the crisis.

Global ratings agency Standard & Poor’s has predicted in a report on the implications of COVID-19 for the Asia-Pacific region that “Australia, Hong Kong, Japan, Korea, Singapore and Thailand will enter or flirt with recession”.

Its definition is “at least two quarters of growth substantially below trend and sufficient to cause unemployment to rise, underlying inflation to fall, and policymakers to react with stimulus.”

“The initial spillover from the coronavirus came from people flows which were already depressed from the bushfires,” it notes.