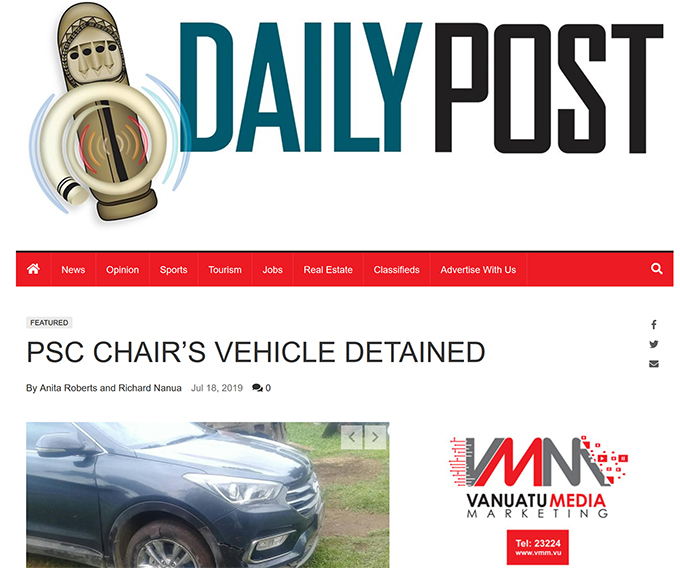 By Royson Willie in Port Vila

Two Vanuatu Daily Post journalists were literally given a pat-down by the police criminal investigation unit yesterday over a story they had written about the vehicle of the Chairman of the Public Service Commission, Martin Mahe, being detained.

The story ran in yesterday’s edition of the Daily Post.

The heavy-handed tactic against journalists took place amid confirmation by police that a complaint has been lodged against the Vanuatu Broadcasting and Television Corporation by Mahe.

The Daily Post journalists were initially told in a phone call that they needed to be questioned over the word “detained” used in the story as it is believed the vehicle was “not detained”.

But both journalists say police traffic officers had verbally informed them that they had confiscated the key to the vehicle and it was effectively under their custody even though the car was not physically taken to the Central Police Station due to a flat tyre.

In other words, police had detained the vehicle.

The VBTC Chief Executive Officer could not be reached for comment yesterday on this issue but the Media Association of Vanuatu President, Stevenson Liu, told the Daily Post that no written formal complaint had been received by the association.

Public interest
Meanwhile, the Daily Post media director, Dan McGarry, said the reporting was made in the public interest.

”Frankly, I think Martin Mahe is behaving childishly,” he said.

”If he believes a news report is grounds for a criminal complaint, then we have to ask if he understands either the media or the law.

”The police took his keys from him for a reason, and the public deserves to know why.

”This is clearly in the public interest.

”The chairman oversees the conduct of all public servants.

”He has been quoted numerous times in our newspaper about vehicle misuse.

”Mr Mahe has a professional duty to hold himself up to the same standards he enforces.

”It’s the media’s job to point this out,” McGarry said.

After the questioning of Daily Post journalists yesterday, police said no complaint was lodged against this newspaper.