By Shailendra Singh in Suva

The University of the South Pacific’s recent 50th anniversary marked 30 years of existence for its regional journalism programme. In an eventful journey, the programme weathered military coups, overcame financial hardships and shrugged off academic snobbery to get this far.

The programme started in Suva in 1988, with Commonwealth funding, and a handful of students to its name. It has produced more than 200 graduates serving the Pacific and beyond in various media and communication roles.

USP journalism graduates have produced award-winning journalism, started their own media companies and localised various positions at regional organisations once reserved for expatriates.

READ MORE: Fiji Report – a day in the life of Wansolwara newspaper

The beginning was hardly auspicious: founding coordinator, the late Australian-based Kiwi academic Murray Masterton, recalled that from the outset, some USP academics felt that journalism was a vocational course with no place in a university. 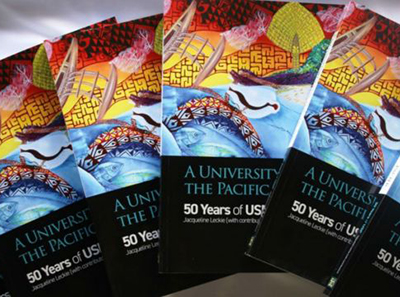 A University for the Pacific. Image: USP

Such disdain turned out to be the least of Dr Masterton’s problems: plans to offer certificate-level courses in 1987 were almost derailed by Lieutenant Colonel Sitiveni Rabuka’s pro-indigenous coups.

Masterton persevered in the face of this political earthquake – the South Pacific’s first military takeover of a nation – and after some delays, he got the programme off the ground. It was a significant development in a region where journalists had little opportunity to attain formal qualifications.

And it was not without irony – the Pacific’s first regional journalism programme, a symbol of media freedom, introduced in a climate of great media repression in Fiji.

Another cloud
Just years after establishing its position, the programme’s future came under another cloud when Commonwealth sponsorship ran out. An injection of French government funds in 1993 provided a new lease of life, with the programme upgraded to a BA double-major degree.

The three-year grant was supervised by Francois Turmel, former BBC World Service editor in London. During those lean years, Turmel often dug into his pockets to fund some activities.
When French funding ended in 1996, USP took over the programme, appointing another Kiwi coordinator in David Robie, a former international journalist, then head of the University of Papua New Guinea (UPNG) journalism programme.

During his term from 1998–2002, Robie made major curriculum changes by integrating the student training newspaper, Wansolwara, into the assessment and introducing professional work attachments with news media organisations.

He was also the first journalism educator to gain a PhD (from USP) in New Zealand and the Pacific, returning to Suva to graduate in 2003 in history/politics. He tells the story of the early decades of Pacific journalism education in his 2004 book Mekim Nius: South Pacific media, politics and education.

After graduating with my PhD from the University of Queensland in 2016, I would become the first local PhD to teach journalism at USP. I saw to the expansion of the programme with a boost in enrolments and improved facilities to cater for the new demand, including the recruitment of two local teaching assistants.

Under my watch, Wansolwara continued to win major awards for excellence in journalism.

The newspaper, founded in 1996 by lecturer Philip Cass, an Aussie, and a number of students, became well-established as the programme’s flagship publication. Wansolwara literally means “one ocean one people.” For founding student editor Stanley Simpson, the paper was a creation of young minds who “wanted to do things their way”.

Student training newspapers are regarded as important strategic assets, and Wansolwara has certainly played crucial roles at crucial times. The paper came to prominence for its coverage of the May 2000 nationalist coup, and the ensuing hostage crisis in Parliament, when the deposed Chaudhry government was held in captivity for 56 days.

Professor Robie has described the 2000 coup coverage as “one of the most challenging” examples of campus-based journalism. The students’ reporting put the overseas parachute journalists to shame, as recounted by Dr Cass: “Much of the outside coverage seemed to be done by people who were just taking the plotters’ statements at face value or else were writing their reports beside the swimming pool at the Travelodge, so the students were giving an alternative view that in many cases was much closer to what was going on.”

Not everyone appreciated the coup coverage. Certain USP academics concerned about security felt that student journalists should practice “simulated journalism”. The smashing-up of the nearby Fiji Television studios by rampaging coup supporters was the last straw for USP, which shut down the Wansolwara news website called Pacific Journalism Online.

However, Dr Robie was able to arrange for a “mirror” site at the Sydney University of Technology to allow the coverage to continue. Wansolwara won the Journalism Education Association of Australia “best publication” in the region award for its efforts.

It was one in a long line of journalism association, as well as regional and Fiji national, awards for excellence in journalism. Such honours, along with a healthy research output, has long since silenced jibes about USP journalism’s fitness as an academic course.

Under the radar
In the post-2006 Voreqe Bainimarama coup years, as media restrictions tightened, Wansolwara, as a student newspaper, was able to remain under the radar and operate more freely than the mainstream media.

Student reporting in the face of risks was exemplary. The April 2009 issue, which included a four-page critique of the coup, was still at press when the punitive Public Emergency Regulations were introduced.

The Solomon Islands student editor at the time, Leni Dalavera, phoned me in the dead of night, concerned that the students risked arrest. Delavera was assured that the authorities were highly unlikely to move against the students, and that the lecturers were responsible for the publication.

The thrills-frills of coup coverage aside, student journalists are also challenged in major ways during the so-called regular beats. A 2016 Pacific Journalism Review journal article by Singh and Eliki Drugunalevu, examined how USP student journalists deal with backlash from peers offended by their coverage.

This article shows how USP’s journalism students changed their initial feelings of fear, hurt and self-doubt to a sense of pride and accomplishment. Students felt they developed resilience, fortitude and a deeper understanding of the watchdog journalism ethos – learning outcomes which would not have been achievable through classroom teaching alone.

This reinforces the idea that students should not be cocooned, or made to practice ‘simulated journalism’, since they learn from dealing with confronting situations, a reality in journalism.

Students like Simpson, who bagged a string of national and regional awards as a professional, cut his teeth as a Wansolwara reporter.

Crucial role
The achievements of staff and students, the unique research undertaken by the programme into regional media issues – which feeds back into teaching – and journalism’s crucial role in the region, have cemented the programme’s position at USP.

In an interview in the November 2016 edition of Wansolwara, USP vice-chancellor and president, Professor Rajesh Chandra, pledged that journalism would remain part of the university’s future.

Chandra, who had strongly supported the establishment of journalism at USP, stated that good journalism was critical for an open and truly democratic society and USP’s role in training good journalists was crucial.

Professor Chandra’s comments underscore not just the journalism programme’s important role at USP, but its contribution to the region as a whole. Such vindication is welcome news for all those who fought for the programme and contributed to its development.

Dr Shailendra Singh is coordinator of USP’s journalism programme. This article was first published as a chapter in the recent book, A University for the Pacific: 50 Years of USP, edited by Jacqueline Leckie. It is republished here with the permission of the author, editor and USP.