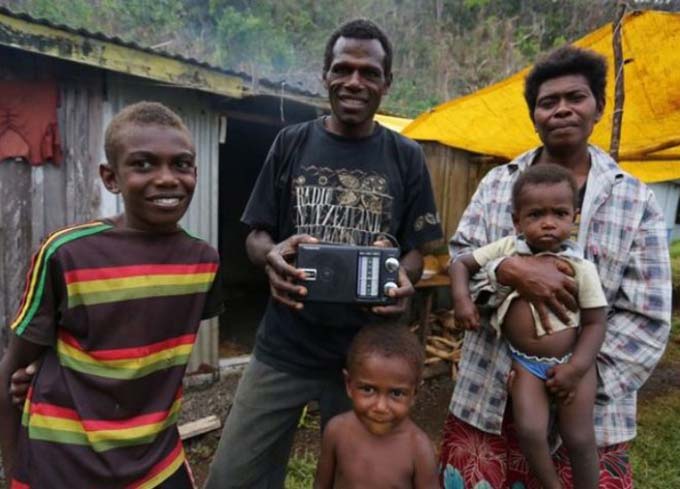 A ni-Vanuatu family with their shortwave radio … vital for news and current affairs. Image: Vila Times

China has taken over many of the Australian Broadcasting Corporation’s former shortwave radio frequencies into the Pacific.

In response to budget cuts, the ABC last year ceased shortwave broadcasting in the Asia-Pacific region ahead of a switch to FM transmission.

“Since Radio Australia has dropped off shortwave, many of the exact frequencies we used to use have been now taken over by Chinese stations targetting the Asia-Pacific region,” he explained.

“Now, shortwave bounces off the upper atmosphere, so a single shortwave transmitter can be heard over thousands of kilometres. It works particularly well over the many islands throughout the Pacific region.”

Snapped up
The revelation that the frequencies have been snapped up comes at a time of heightened speculation in Australian media and commentaries about the motives behind China’s growing influence in the Pacific.

“There’s obviously a bit of interest there… the fact that China has been ramping up while we’ve been pulling back,” Marks said.

“I should say that Radio New Zealand International (now known as RNZ Pacific) does a terrific job in the Pacific. They’re up there every day and they’re managing to run it. It just seems odd that Australia wouldn’t be doing it.

The withdrawal of ABC’s shortwave presence in the Pacific is part of an ongoing Australian government review of the country’s media services in the wider region.

The Pacific Media Centre has a content sharing arrangement with RNZ Pacific.