MAY 19, 2000: As editor of the Fiji Daily Post newspaper in Suva, I was expecting some big stories that day but nothing like what happened – today, 18 years ago. A march by radical indigenous Fijians had been planned and Parliament was sitting, with an Indo-Fijian Prime Minister leading the government benches.

My news editor and I made sure we had everyone in place, then went for breakfast.

Back in the newsroom I was told the march was getting violent and continuing on to Parliament, which got me worried. I quickly drove to pick up the children and, after seeing them home safely, returned to work, knowing for sure that I wasn’t going to be home for dinner.

Fiji had crashed into another coup, this time led by a man called George Speight and rogue soldiers from the Fiji Military Forces’ elite Counter Revolutionary Warfare Unit (CRWU).

There was an eerie calm in the newsroom, almost like the lull before a storm with people seeming to be expecting something bad to happen but pretending to be going about a normal day.

I quietly disappeared into the tearoom to make coffee. The sound of breaking glass brought me out and I said to myself, perhaps someone has broken something.

From my experience of past coups in Fiji I knew that there was always going to be violence no matter how much the coup perpetrators tried to paint over their actions using a noble brush.

Two sides
There were always two sides to the argument and one side was always going to get hurt, but even then I had not expected to see what I saw that day, with the situation deteriorating as quickly as I was seeing.

In a matter of minutes, maybe a short 30 minutes or less since I returned to the newsroom, our part of Suva had turned from nothing much to a seething, angry pit of senseless violence — all in the time it took to make a cup of coffee.

Hundreds of people, maybe a thousand even, I don’t know, filled the streets below our second-floor vantage point.

Shops were burning and men and women were smashing through glass windows and doors and looting every shop on the streets below.

A group of men led the way, breaking through doors and windows then moving on, allowing the throng behind to get in and take as they pleased in a free-for-all scramble for anything that could be carried away – TVs, shoes, clothes, stereo sets, food, anything.

There was cursing and shouting and the noise was deafening and frightening. The sound of breaking glass would haunt me for months after that.

Indo-Fijians had abandoned the city and fled for their lives, and many who had been unable to leave had gone into hiding in back rooms and anywhere, leaving their business at the mercy of this maddest march of madness; a few Indo-Fijians drove by still trying to get out, and some of them were forced to stop, dragged out of their car and assaulted.

I was really scared
I was scared, really scared, especially for the Indo-Fijian members of our staff. Our financial controller was Indo-Fijian, and a big man too, but when he came up to me in the newsroom and put out his hand, I knew he was afraid for his life and when I held his hand I felt him trembling.

Our newsroom was quickly turning into a sanctuary, too, with owners of shops and anyone nearby who had been slow to leave the city, seeking safety there. We called the police several times but no one came.

Our marketing manager, Lionel Heffernan, was a big man ­– strong — a farmer on his days off, and he walked up the stairs into the newsroom armed with a crowbar, presenting me with the first sign of a willingness to fight back.

We knew we had to do something, we had to protect our staff. We called all our indigenous Fijian staff members and briefed them and together we walked downstairs in silence.

Our offices were down a short alleyway and accessible only from the front, from the main street where the burning and looting were taking place.

Heffernan stood beside me, the crowbar clearly visible in his hand, saying words of encouragement.

There were men and women beside me with far more courage and strength than I could ever muster in several lifetimes and without them the outcome would have been very different. But the weak and the strong and the older and the young, we stood together that day, indigenous Fijians facing up to indigenous Fijians, until the sun started to go down and soldiers arrived to set up roadblocks and empty the streets.

Police Commissioner Isikia Savua and his officers finally turned up in a pointless show of useless force after the damage had been done and no one was about. Suva was already in ruins.

It was too dangerous after that to put out a newspaper, so we cancelled that night’s edition and, using only indigenous Fijian drivers, dropped everyone home, including those who had come off the street to seek safety.

As a journalist it is my job to report and not to judge but the events I witnessed that day affected me in ways that would swing me to one side and keep me there for a long time. 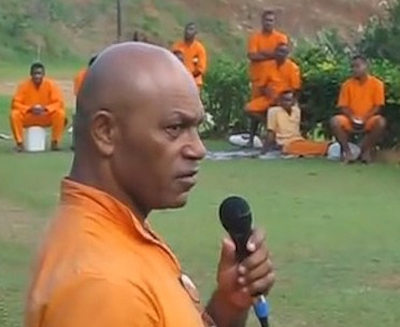 Terrorist act
That day was not political. It was a criminal and terrorist act and I decided that from then onwards our coverage of George Speight and the events that would follow would focus on terrorism, even though I knew that the course I was taking would bring me into a collision course with the terrorists themselves, some of whom I knew well, including Speight himself.

Finally darkness enveloped Suva and I got into the car and left. At home, my wife Maureen had used the beds to barricade the windows and put the children and everyone else to sleep on the floor in the hallway.

I walked in and hugged and kissed her then went down on my knees and kissed all our children and all the other children on the forehead.

Then I sat down and cried. A month later to the day, on June 19, 2000, I walked into The Southland Times newsroom in Invercargill, New Zealand, and signed on as a subeditor.

Jale Moala, one of Fiji’s most experienced and talented journalists, is currently night editor of The National daily newspaper in Port Moresby, Papua New Guinea. George Speight is currently serving a life sentence in prison for treason.

Heading back to the playground? 10 tips to keep your family...

Kumanjayi Walker murder trial will be a first in NT for...

A litany of losses: a new project maps our abandoned arts...