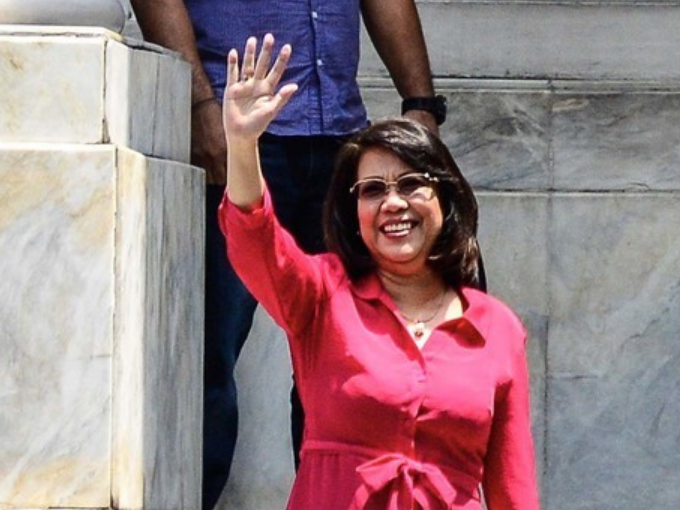 Ousted … Philippines Chief Justice Maria Lourdes Sereno waves to supporters the day she returned to the Supreme Court on May 9, 2018, after two months on leave. Image: Maria Tan/Rappler

By Ralf Rivas in Manila

After the ousting of the Philippines’ Chief Justice Maria Lourdes Sereno, the six justices who voted against the quo warranto petition have claimed the decision has made the Office of the Solicitor-General more powerful.

The justices raised their concern in their separate dissenting opinions following the Supreme Court’s 8-6 unprecedented and historic vote in favour of the petition – a prerogative warrant – on Friday.

Associate Justice Mariano del Castillo wrote in his dissenting opinion that the decision of the majority had granted the Solicitor-General (SolGen) powers to “remake the composition” of the High Court, “causing the removal of its members”.

“With the SolGen wielding a quo warranto sword of Damocles over the heads of these officers, the Filipino people cannot be assured that they will discharge their constitutional mandate and functions without fear or favor,” said Del Castillo.

Without such assurance, there can be no guarantee that the primordial interest of the sovereign people is promoted.”

The quo warranto petition to remove Sereno from office was on the basis of an alleged invalid appointment.

This is the first time that the Supreme Court has removed its own chief, in a petition widely slammed for violating Sereno’s constitutional right to an impeachment process.

Sereno is the second chief justice to be removed from office after Renato Corona was ousted in 2012. He was found guilty of betraying the public trust and committing culpable violation of the Constitution.

Quo warranto or impeachment?
The six dissenters all agreed that impeachment was the only way to unseat an impeachable officer like Sereno.

Bernabe wrote in her opinion that the OSG should have questioned the discretion of the Judicial and Bar Council (JBC) to include Sereno in the shortlist of chief justice applicants.

Bernabe pointed out that the OSG “voluntarily admitted that the JBC’s grave abuse of discretion is not at all an issue.”

In his dissenting opinion, Velasco relayed the same sentiment.

“There was no attempt to assail and contest much less nullify the JBC’s findings that the respondent possessed all qualifications, the JBC’s decision must stand,” Velasco said.

Yes to quo warranto but…
Velasco said that the “remedy of quo warranto is available to unseat, in the extreme, even an impeachable officer”.

However, he clarified that the one-year prescribed period for filing such a petition had lapsed. He said that Sereno’s nomination and appointment “has not been timely challenged, much less nullified,” and that “the findings and qualifications should be respected.”

Velasco insisted that the OSG had to file a petition for certiorari against the JBC before seeking Sereno’s removal from office.

Bernabe also said that impeachment was not the sole move of removing impeachable officials as it would be “clearly absurd for any of them to remain in office despite their failure to meet the minimum eligibility requirements”.

She said that there “should be a remedy to oust all our public officials, no matter how high-ranking they are, or how critical their functions may be,” but after clear “determination that they have not actually qualified for election or appointment”.

Bernabe stressed that the JBC’s rigorous process was lenient on the Statement of Assets, Liabilities, and Net Worth (SALN) requirement. In fact, none of the applicants were able to submit all SALNs up to 2012.

Despite voting for the retention of Sereno, Bernabe said she made no claim that Sereno “is or is not a person of integrity.”

“In fact, if there is one thing that is glaringly apparent from these proceedings, it is actually the lack of respondent’s candor and forthrightness in the submission of her SALNs. Integrity must be threshed out in the appropriate case for certiorari,” Bernabe said.