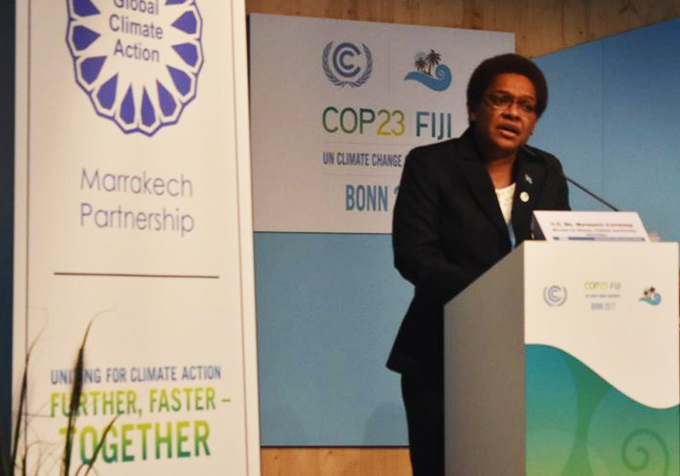 By Mereoni Mili in Bonn, Germany

It is important that women and girls remain in the centre of climate solutions.

These were the words of Fiji’s Minister of Women, Children and Poverty Alleviation Mereseini Vuniwaqa during the Gender Day event at COP23 in Bonn, Germany, this week.

She said it was important to have specific objectives for women in any economic or investment programme responding to climate change whether it involved mitigation, adaptation or resilience.

“If we understand the special place women have in our communities and act accordingly we would create strong programmes, have more effective responses, build better and resilient communities”, she said.

She added that climate change was harsh for women largely because women were over-represented among the world and were exposed to these dangers.

“Women typically are critical to keeping communities together, they care for the children, and they maintain traditions and give stability to villages”, she said

Vuniwaqa said talanoa dialogue on the topic of economic case for gender responsive climate action would highlight the compelling economic reasons why governments were seeking and investors were funding climate policy.

Highlighting gender
It would also highlight actions that had gender as a core element.

Vuniwaqa reminded delegates that they needed to put women and girls at the centre of all climate efforts in order to succeed.

The Fijian Presidency at COP23 has emphasised the importance of equitable involvement of women in sustainable development and the implementation of climate policy, including the Gender Action Plan.

The Gender Action Plan had been finalised to recognise the role of women in climate action.

Deputy Prime Minister of Samoa, Flame Mata’fa, said that full participation and mainstreaming of gender issues was important and it was a step the Samoa government had taken.

“It is important to emphasise the traditional roles and functions women in the Pacific play so that people come to a common understanding and objectives,” she said.

Mereoni Mili is a student journalist on Wansolwara newspaper at the University of the South Pacific. She won a scholarship to attend COP23.