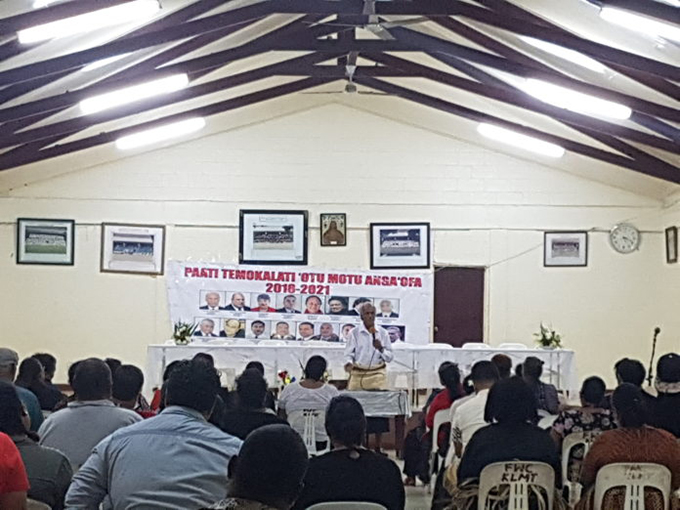 Tongan Prime Minister ‘Akilisi Pōhiva told his supporters that if he had really wanted to take away people’s land and the royal powers he would have made himself Minister of Defence and Minister of Land at the last election.

Pōhiva made the revelation on Tuesday night when he spoke in front of hundreds of his Tongatapu 1 constituents at the Uaiselē Hall at Sipu Road in Kolomotu’a before Thursday’s snap general election, which boosted the Democrats with a landslide win.

He was rejecting claims by his political opponents that he had a secret agenda to take away people’s rights to their land and give it to the nobles.

Kaniva News was unable to publish anything on his speech immediately because of Tonga’s electoral law which prohibited the publication of any material that could promote a candidate within 24 hours of Thursday’s election.

In his speech, the Prime Minister said he struggled in 2014 to choose a minister for the Ministry of Land and His Majesty’s Armed Forces.

Pōhiva, who was re-elected to Parliament in Thursday’s election, said he lay down at home at night and “thought deeply” about the problem.

‘Fragile’ future
He said he knew how “very fragile” the future of land and the defence services seemed in some people’s minds, especially the nobility and the royals while he – a man who had called for significant changes to the status quo in the past 30 years – was leading the country.

He finally made up his mind to appoint Lord Ma’afu from the nobility to the posts.

He thought the noble’s appointment could show the nation his ambition to bring about reforms that could bring more stability to Tonga.

He said politicians who campaigned against him during the snap election misled the people by telling them he was trying to unnecessarily remove the king’s power.

“That was not right,” Pōhiva said.

Protecting His Majesty
Pōhiva, whose critics accused him of wanting to “become king”, said he understood the way he wanted to protect the king put him and his government in a delicate situation.

The Prime Minister was referring to submissions from Cabinet to amend the constitution, including a proposal to reinstate the former Privy Council structure in which the king met with cabinet ministers in Privy Council.

The move was described by the Minister of Justice Vuna Fā’otusia as an attempt to make sure the king was directly informed first hand about government matters by the ministers because they were the ones who did government’s administration work.

Fā’otusia said the current structure was not secure because the Privy Council was filled with people who were not elected by the people and were not accountable to the public.

Pōhiva explained that amending the law would benefit the king and the people, but unfortunately his critics had twisted and demonised their intentions.

‘Dirty politics’
He described it as “dirty politics” and thanked his followers for helping defeat his rivals in the three decades he had been involved in Tongan politics.

Tuesday night’s meeting was repeatedly interrupted by applause and yells of support from the audience.

As Kaniva News reported on Friday, Pōhiva and his Democratic Party won 14 parliamentary seats which enabled them to form the next government without needing the help of the nobility or the independents.

It is understood Pōhiva and his cabinet were due to meet this weekend, although the line-up of the cabinet has not been announced yet.