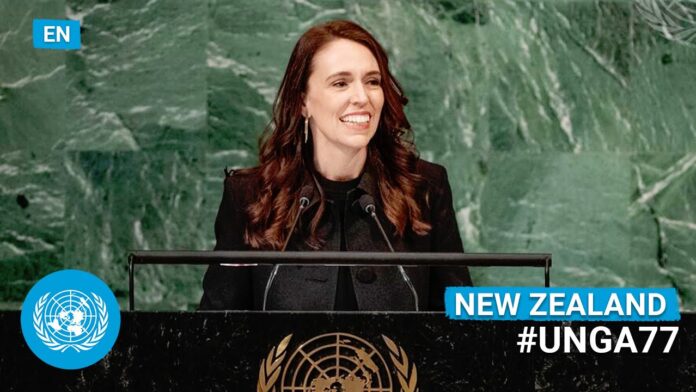 Political Roundup: Jacinda Ardern’s tilt towards the West continues at the UN

Jacinda Ardern intends to continue a more pro-Western foreign policy strategy, if her agenda from a hectic week of diplomacy is anything to go by.

New Zealand’s Prime Minister met with four G7 leaders – Liz Truss, Joe Biden, Justin Trudeau and Emmanuel Macron – in various settings while she was at the Queen’s funeral in London and at the United Nations in New York.

While at the UN, Ardern fitted in a meeting with Ukrainian Prime Minister Denys Shmyhal and spoke with Olena Zelenska, the wife of Ukrainian president Volodymyr Zelensky.

Ardern also met with the Chilean president, Gabriel Boric, and with the UN Secretary-General, António Guterres. There were also shorter, more fleeting meet-and-greet opportunities on the UN floor – such as with Iceland’s Prime Minister Katrín Jakobsdóttir – and at a US-hosted reception for world leaders, where Ardern talked to Pakistani Prime Minister Shehbaz Sharif.

Ardern addressed Pacific Islands Forum leaders at the launch of the 2050 Strategy for the Blue Pacific Continent plan. And the expansion of a new US-led grouping, the Partners in the Blue Pacific, also took place while Ardern was in New York. The group previously included Australia, Japan and New Zealand, but it has now been widened to bring in Germany and Canada.

The PM’s ability to attract the attention of top world leaders is well-known and is a measure of her international standing. It was certainly not a one-off: this was her third meeting this year with Joe Biden. And it was her second with Trudeau and Macron, after she was an invited guest at the North Atlantic Treaty Organization (NATO) summit in Madrid in June.

Indeed, the common denominator for many of Ardern’s interlocutors seemed to be their commitment to supporting the Western-led coalition that has emerged from Russia’s war on Ukraine.

In a week in which Vladimir Putin mobilised 300,000 reservists and indirectly threatened to use nuclear weapons, it is probably no surprise that Ardern sought to show her solidarity through the company she kept.

The Prime Minister’s speech to the UN General Assembly was also very much in keeping with this theme: Ardern called Russia’s war ‘illegal’ and ‘immoral’, before highlighting New Zealand’s opposition to nuclear weapons.

A notable omission from Ardern’s speech was any mention of the word ‘food’, which stood out as a major theme in addresses from many countries in the Global South.

India’s foreign minister, S. Jaishankar, said that his country was ‘on the side of those struggling to make ends meet, even as they stare at the escalating costs of food, of fuel and fertilizers’, while Philippines president Ferdinand Marcos called food ‘an existential imperative, and a moral one. It is the very basis of human security’.

Indeed, a dedicated food security summit co-hosted by the US, European Union, African Union and Spain was held during UN leaders’ week. Ardern did not appear to attend the event, which was held on the same day as a ‘Christchurch Call’ leaders’ summit she co-hosted with Emmanuel Macron.

Food security did make it into the UN statement made by Australian foreign minister Penny Wong, however, who said the crisis amounted to a ‘growing scale of human suffering that threatens untold global instability’.

A third strategy is to use both figures – an approach the UK pursued by sending both its new Prime Minister Liz Truss and foreign secretary James Cleverly. If New Zealand’s aim had been to maximise meeting opportunities after the Covid-19 pandemic, this tactic might have been considered. But Ardern decided to keep Nanaia Mahuta back in Wellington, where she welcomed new heads of mission and faced questions over domestic issues.

Back in New York, a key difference between the Global North and Global South at the UN unfolded over the approach to the war in Ukraine. Western countries largely pointed fingers at Russia. Joe Biden said ‘it’s Russia’s war that is worsening food insecurity, and only Russia can end it’, while Liz Truss told her audience that ‘we will not rest until Ukraine prevails’.

By contrast, non-Western countries such as India, Turkey and Qatar were keener to contemplate the idea of a negotiated settlement simply to end the war.

The Turkish president, Recep Tayyip Erdoğan, pointed to his country’s success in brokering the recent Black Sea grain export deal and called for a ‘reasonable, just and viable diplomatic solution’ to the war that would ‘provide both sides the opportunity of an “honourable exit”‘.

Qatar’s Emir, Sheikh Tamim bin Hamad Al-Thani, even called for an immediate ceasefire – a word rarely used in current discussions about the war in Ukraine.

For his part, the Indian foreign minister, S. Jaishankar, argued his country was ‘on the side of peace’ and wanted an ‘early resolution’ to the conflict. He also noted that the global focus on Ukraine meant less attention was being paid to other crises in India’s immediate neighbourhood, such as Afghanistan, Myanmar and Sri Lanka.

These calls may fall on deaf ears.

With both sides keen on maximising their positions, a resolution to the war in Ukraine appears further away than ever.

As Jacinda Ardern inches New Zealand’s foreign policy towards the West, it is understandable that she might want to spend more time with like-minded counterparts.

It is natural to stand alongside those who we agree with.

But as the UN General Assembly showed this year, it is worth remembering that there are many other points of view.

Geoffrey Miller is the Democracy Project’s international analyst and writes on current New Zealand foreign policy and related geopolitical issues. He has lived in Germany and the Middle East and is a learner of Arabic and Russian.

Other items of interest and importance today

MAHUTA INQUIRY AND INTEGRITY IN POLITICS
Max Rashbrooke (Stuff): The curse of cosyism in public life is hurting us all
Tracy Watkins (Stuff): Why the Mahuta investigation needed to happen
Herald Editorial: Contracts awarded to family of Nanaia Mahuta need a thorough review (paywalled)
David Farrar: Hipkins apologises for smearing English
Karl du Fresne: The Mahuta saga: shameful not just for the government, but for the media too

TREATY, RACE RELATIONS AND ETHNICITY
Audrey Young (Herald): Kelvin Davis on the Treaty of Waitangi: ‘It’s the perfect document. It’s just we happen to confuse it‘ (paywalled)
Stephanie Ockhuysen (Stuff): John Campbell’s journey to understand racism and the damaging effect of colonisation
Te Rina Kowhai and Alka Prasad (Newshub): Increase in online racism towards Māori concerning, experts say
Brendon McMahon (Local Democracy Reporting): ‘They’ll have no bloody idea’ – bilingual signs on the West Coast
Henry McMullan (1News): Māori firefighter files treaty claim against FENZ
Lana Hart (Stuff): We’re maturing, but are we grown-up enough to strike out on our own?
Eda Tang (Stuff): ‘This is gonna be cringe’: Chinese Language Week falls flat for Chinese Kiwis
Eda Tang (Stuff): Please stop saying ‘ni hao’ if you want to be an ally to Chinese people
Tze Ming Mok (Spinoff): When are you White and when are you Black?

Grattan on Friday: To have the best chance of success, the Voice must be sold to voters as a positive, unifying story

Banning menthol cigarettes and more health warnings are only the start. Australia could look to NZ for how to do tobacco control