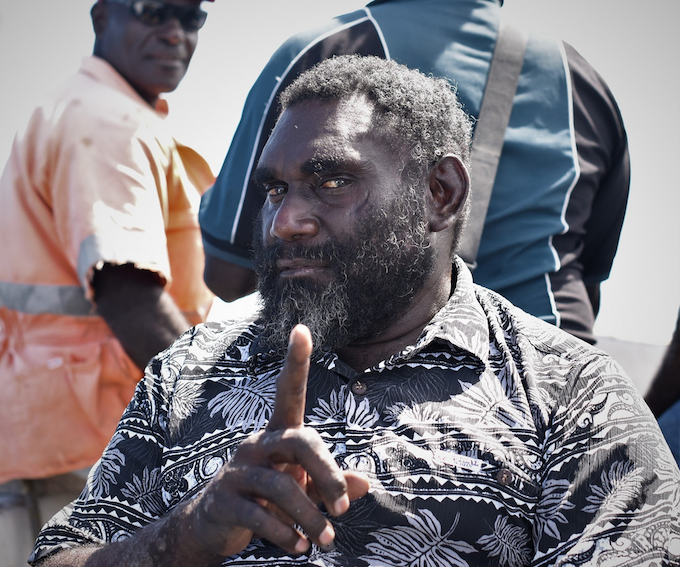 Ishmael Toroama built his reputation as a bold fighter and later a commander in the Bougainville Revolutionary Army (BRA) in its struggle to close the Panguna copper and gold mine and gain independence for Bougainville from Papua New Guinea in the 10-year civil war of the 1990s.

Later, in 2001, he became a signatory of the Bougainville Peace Agreement under the auspices of which last year’s referendum on Bougainville independence recorded a huge vote in favour of the province’s separation from PNG.

But in more recent years, Toroama, from Central Bougainville, returned to what his family has done for generations – peacefully grow cocoa.

In this capacity he once told a journalist that he had a dream: “One day I’d like to be able to buy a bar of Amataa chocolate – with a focus on the flavour.”

Toroama, whose body bears the scars of many hard fought battles, joined the BRA in its early days and according to one story was the first BRA guerrilla to obtain an automatic weapon from the Papua New Guinea Defence Force (PNGDF).

In a journal article ‘The Gangs of Bougainville’ by Stan Starygin, Toroama was portrayed as a ‘Rambo’ . He came to wider attention in the documentary film, The Coconut Revolution, which sought to portray the BRA as a band of convivial guerrillas in pursuit of self-reliance and a return to a traditional lifestyle.

Field commander
Toroama did not take long to become a prominent ‘field commander’ in the BRA and later succeeded the BRA’s first ‘chief of defence’, Sam Kauona, who happens to be an eliminated candidate in the current election.

As journalist Dominic Rotheroe wrote in an article in The Independent (The Green Guerrillas, 13 September 1998) Toroama is nothing if not a very strong and intimidating man:

“Ten minutes further into this training patrol, a mock ambush is launched and Ishmael Toroama hurtles into the bush, M-16 blazing, while his soldiers blast the jungle with a mix of captured M-l6s, rejuvenated Second World World War guns, and home-made rifles. This may be to keep the ‘boys’, as everyone calls the BRA, on their toes. But the tear gas is purely for us, a short sharp dose of Bougainville reality.

“Ishmael is fond of dishing out such medicine. Later, as he accelerates his battered 4×4 Hi-lux truck along a track more hole than road, he admits that on these training exercises he attacks his men with live ammunition.

“‘Ever hit any?’ I ask. ‘Oh yes.’ ‘How many?’ ‘Twelve.’ ‘Twelve! Seriously injured?’ ‘Er, one yes, very.’ It is training like this that has turned the BRA into such an effective fighting force. There are no half-measures here.”

But Jesus was to come into Toroama’s life when, during a skirmish with PNG government forces in 1997, he was critically wounded by a rocket-propelled grenade.

“Jesus has come into Ishmael’s life in a big way. The big man is ‘no longer proud to be a fighter’. Inside his house a picture of Rambo is now dwarfed by a flock of evangelical posters. He tells us how Jesus appeared to him after he was wounded. ‘He said to me, you are an inch from death now. Follow me, because I am the Lord.’ And this he did; when the war ends, he says, he would like to become a preacher.”

Peace agreement
Well, this did not happen. First Toroama helped negotiate the peace agreement, then took the lead in subsequent reconciliations, next benefited greatly from selling scrap mine equipment from Panguna and later returned to the family tradition of cocoa farming.

During this post-war period, Toroama and his group not only expanded their activities by dismantling and selling scrap metal from Panguna but by offering ‘protection services’ to local businesses and visitors.

Starygin writes that during the disarmament process endorsed by the peace agreement, “Toroama presented himself as an agent of peace”.

Toroama’s role was accepted by the international peace brokers who worked with him on the disarmament process and he acquired status by tapping the largesse they brought to Bougainville, becoming the virtual master of ceremonies at peace and reconciliation events.

This role, Starygin says, “went beyond the use of his celebrity to bring disputants together and grew to include event management by Toroama’s gang and those businesses in which Toroama ‘had an interest’ which, in turn, became the main conduits for AusAid and UNDP’s reconciliation dollars.”

“Toroama’s BRA-days notoriety, his role in the peace process, the magnitude of his post-crisis ‘economic activity’ and the possession of weapons and loyalty of the men who carry them have made Toroama a viable political force in Central Bougainville. Toroama has not won an election yet but it is not for want of trying.

“He is no underdog and has come a solid second in the last two elections, although the voters each time preferred a civil servant with a record of service to Toroama. Encouraged by his numbers and undeterred by defeat Toroama has announced his candidacy for President of Bougainville for the 2015 election.”

Distant second
He finished a distant second to John Momis (who in that election received more than 51,000 votes to Toroama’s 18,466) but now, five years on, it seems that his political ambition is about to be fulfilled.

But we don’t yet know how this personal history will transition into how he will perform in the role of a significant Melanesian political leader.

What we do know is that Toroama has been an independence fighter, that a majority of the Bougainville people want independence, that the Papua New Guinea government has shown no support for this and that the epic question of Bougainville independence is one that is up for answering.

What we do suspect is that, although Ishmael Toroama has shown himself to be a shrewd operator, there is no proof of any illegality or corruption in his varied and volatile career.

That is an important consideration given that corruption in Bougainville, as it is in PNG, has been a problem of mounting concern.

We do indeed live in interesting times.

Keith Jackson is a retired educator, school publications editor and communications lecturer and consultant in Papua New Guinea who has managed radio stations in Rabaul and Bougainville and was head of policy and planning in the National Broadcasting Commission at independence in 1975. He has also worked in development and communication roles for UNESCO in Fiji, Indonesia, India, Maldives and the Philippines. He began his PNG Attitude blog in 2006. Pacific Media Centre articles are republished with permission.

‘Could do better’: Top Australian economists award the budget a cautious pass