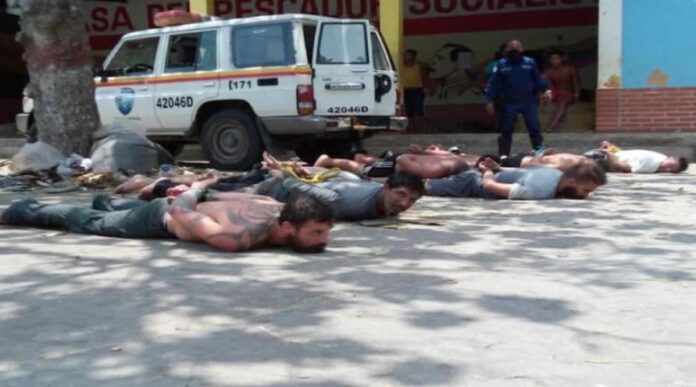 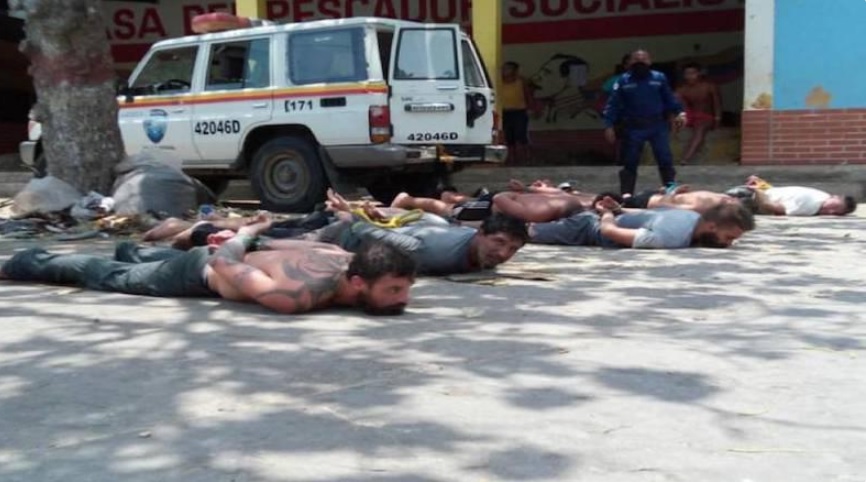 Now that we have had a few days to study the failed, illegal paramilitary incursion by a group of American and Venezuelan mercenaries into Venezuela, some key details have emerged in this incredible story. They reveal the internal dynamics of the country’s fractured, demoralized, and financially corrupt opposition. Much of the information was provided by the former U.S. soldier Jordan Goudreau, hired for “Operation Gideon” by Juan Guidó himself along with advisors Sergio Vergara, Juan José Rendón, and with the advice of attorney Manuel Retureta, all of them who signed the service plan to launch the paramilitary operation (called “General Services Agreement”).

A dozen paramilitaries were captured from Sunday May 3 to Monday May 4 in the coastal area of La Guaira and Chuao[1] with the help of fishermen. They include deserters from Venezuela’s armed forces and police, along with former U.S. soldiers. Eight of the mercenaries were killed by the country’s security forces.[2]

The trove of evidence makes it impossible for Guaidó and his advisors to deny their involvement in the contract for services. Not only are copies of the 8-pages General Services Agreement circulating on the internet,[3] there is also a recording of their phone conversation while they were signing it.[4]

U.S. mercenary Jordan Goudreau, owner of Florida Silvercorp USA Inc, which has been around for two years, is revealing all the inside information for the simple reason that Guaidó never paid the agreed upon fee, including a retainer of $US1.5 million. He claims that he only received US$50,000[5] through Rendón.

A native Canadian, Goudreau is a U.S. Army combat veteran of Iraq and Afghanistan. According to his simple website that centers around his personal image, Jordan Goudreau “has also planned and led international security teams for the President of the United States as well as the Secretary of Defense.”[6] According to a profile AP wrote about him,[7] that claim seems to be an exaggeration of his friendly relationship with Keith Schiller, who served as chief of security and bodyguard to Trump. Several interviews conducted by AP of people close to the mercenary suggest that Goudreau is politically naive, impulsive, and harbors delusions of grandeur.

Airing it all out in public

From all the extensive videotaped interviews of Goudreau, it is apparent that on the heels of a failed operation fraught with incompetence and which resulted in the deaths of several mercenaries, the soldier of fortune is rushing to reveal all to the world press in order to redirect blame towards Juan Guaidó. It is also clear that his public statements are motivated by the fact that his fees were not paid and he has no obligation to maintain confidentiality, because “At this point the contract has been completely fractured and nothing has been upheld on the side of the opposition (…) I have done everything that the contract outlines.”[8]

The actual contract has over 70 pages according to Goudreau. The shorter General Services Agreement promises Silvercorp payment of over US$200 million[9] for overthrowing the government of Nicolás Maduro. According to the contractor, the money comes from the ample funds the U.S. has illegally confiscated from the Citgo oil company, owned by the Venezuelan State, and which has been transferred to Guaidó’s account.[10] Goudreau also cited the Rio Treaty (The Inter-American Treaty of Reciprocal Assistance, TIAR) as justification for the operation, which is the agreement the Venezuelan opposition has fruitlessly been trying to invoke in the Organization of American States (OAS) to spur military action against Venezuela.[11]

“They hurt us more than they helped us. At the beginning they said they were going to help us. You have these guys with access to millions of dollars. They were given 90 million dollars, 9 million of which were allocated towards defense. Look, they are going to deny all this. They knew there were guys in the frontier. You have 60 Venezuelans who were hungry, training, thinking about liberation, and they went and did it. Meanwhile your opposition government is making tons of money. I think there is a problem.” When asked why he thinks Guaidó withdrew support for the attack, Goudreau added, “I think there is a lot of money involved right now. When people are making money, they are comfortable. I don’t think there is a real incentive to free” the country.[12]

The opposition’s growing disenchantment with Guaidó

Despite all the evidence against him, particularly the contractor’s complaints of non-payment and his apparent signature on the contract for services, the self-proclaimed president of Venezuela was quick to deny any involvement with the paramilitary operation.[13]

All of these revelations have two implications. First, they confirm the continuous charges made by the Maduro administration in recent years of the existence of a real paramilitary threat coming from Colombian soil.[14] Second, it drives a wedge of criticism among many in the opposition, particularly in the U.S., who have been coming down hard on Guaidó for abandoning the former Venezuelan military officers.[15] Even the journalist who interviewed Goudreau on video, Patricia Poleo, who is against the Chavista Maduro government, is being harshly criticized by the most extremist elements of the opposition.[16]

Criticism and scandal are familiar themes. This case is reminiscent of the abandonment of dozens of Venezuelan military deserters in Colombia, some with their families, after the frustrated fake “humanitarian aid” operation that was staged in February 2019 along the Colombian-Venezuelan border. On that occasion it came to light, and was confirmed by the Colombian intelligence services, that Guaidó’s team stole thousands of dollars that had been raised for that campaign. The Venezuelan deserters who were inspired by the opposition were abandoned in unpaid hotel rooms.[17]

The opposition is clearly willing to use paramilitary violence

This case proves several fundamental points: That Guaidó is handling large sums of money; his constant attacks on the Venezuelan government are to limited effect; and he has not managed to break the unity of the Venezuelan military. It is also clear that he is financing semi-clandestine private activities, with nothing to show for it so far. And he is willing to hire mercenary forces to launch adventurous military attacks that risk the lives of the participants and of civilians in Colombia and Venezuela.

While the moderate opposition forces continue to engage in talks with the government of Nicolás Maduro, an increasingly isolated hard-line faction continues in its efforts to uphold the U.S. sanctions, to validate foreign military intervention, and to launch paramilitary attacks.

It is also clear that incompetence and low morale are having a significant impact on the extremist opposition in Venezuela, which for some unknown reason, abandoned the group of mercenaries at the start of their attack on this Caribbean nation. The case is like so many such operations in the history of U.S. intervention in Latin America, when groups of mercenaries are abandoned at the last minute for reasons of political pragmatism, realistic military calculations predicting failure, money grabbing scandals, or simple military incompetence.

Leaving obvious clues: operational naiveté and the end of Guaidó

All of the recent scandals surrounding Guaidó have led to a significant withering of his support. There has been clear disappointment in his lack of results, while all the hundreds of millions of dollars the U.S. government has placed at the shadow government’s disposal have not paid off. It also shows that Guaidó is politically immature and inept, leaving such clear traces as a mercenary services contract signed in his handwriting at a law firm that cannot refute the legal evidence.

There is no doubt that this marks the beginning of the end of Guaidó’s influence with the hard liner sector of the  Venezuelan opposition and could perhaps bolster the position of the moderates who prefer a political solution over sanctions, violence, and outside intervention. This unfunded, ill-prepared military attack fraught with errors cost human lives—about eight soldiers perished, many of them young former soldiers and police officers shown on the videos of the ex-military fighters before the attack began.[18] All those who plotted to support or abandon this military action bear the blame.

The words of Jordan Goudreau leave no doubt about what much of the opposition is feeling now, after the failure of this pseudo-military adventure: “I have been a freedom fighter my whole life. I fought in Iraq, in Afghanistan, I am a decorated soldier. I have been shot at. But I have never ever in my life seen the back stabbing and the level of complete disregard for men in the field.”

This article was translated from the original in Spanish by Jill Clark-Gollub, COHA Assistant Editor/Translator.