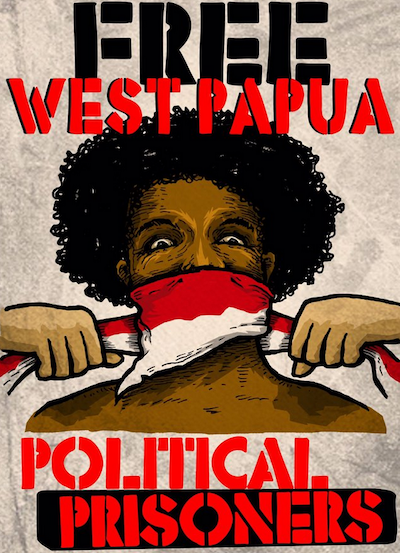 The jailing of the Jakarta Six – five Papuans and the first Indonesian to be convicted for a Papuan protest – in Indonesia last month has focused global attention on the plight of political prisoners in the face of a failing struggle against the coronavirus pandemic.

Already several analysts are warning that both Indonesia and Papua New Guinea are at risk of becoming coronavirus “failed states” and this will be of concern to Australia and New Zealand.

While Papua New Guinea has had only eight confirmed covid-19 cases so far – a spike is expected this month in spite of the state of emergency, Indonesia already has 10,843 cases with 831 deaths and the real toll is feared to be higher and climbing.

In Indonesia’s two Melanesian provinces of Papua and West Papua, the figures are reportedly 189 and 37 respectively with seven deaths overall and a new surge reported in the Mimika mining hub. Remote tribespeople have taken to setting up their own blockades to protect their villages.

“Countries with pre-existing conditions — poverty, limited healthcare, ineffective or corrupt governments — are fragile, and it is these countries that covid-19 is threatening to push to the brink of survival,” writes ABC’s foreign affairs correspondent Melissa Clarke.

She acknowledges those critics who suggest the United States has made a “solid start” for gaining such a dubious status, “but for the Australian government, the real concerns lie just to the north – Papua New Guinea and Indonesia.”

Human rights advocates and civil society groups are voicing their condemnation of Papuans  being held in crowded and risky Indonesian jails for taking part in peaceful demonstrations and a “Free West Papuan political prisoners” campaign has gone viral on social media.

Political prisoners still held
ETAN – East Timor and Indonesian Action Network, founded in 1991 and one of the most active US non-profit groups campaigning for human rights across Southeast Asia and Oceania, says that while Indonesia “struggles to contain the spread of covid-19”, the government still holds anti-racism and pro-independence prisoners in jails across West Papua, Jakarta and Balikpapan.

“In many cases, trials have continued against these political prisoners endangering the health of the prisoners, lawyers, judges and court staff,” ETAN says.

The legal papers demonstrate that all of the detainees are being “arbitrarily and unlawfully detained in violation of Indonesia’s international human rights obligations”.

The prisoners are 56 indigenous West Papuans, five Moluccans, One Indonesia, and one Polish citizen.

“While most of them are on remand and still awaiting trial, seven have been sentenced and others are currently on trials,” says Tapol.

“The great majority of the political prisoners – 56 – were arrested in the crackdown by Indonesian authorities during the mass political protest movement in support of West Papua last year – dubbed the “West Papua Uprising”.

Carrying, displaying flags
“The activities for which they have been detained range from simply carrying or displaying the West Papuan or Moluccan national flags, to participation in peaceful protests and being members of political organisations which support self-determination – all internationally protected activities.”

In its May Day message, ETAN condemned the conviction of the Jakarta Six for their “peaceful expression of their opposition to Indonesia’s heavy-handed rule in West Papua”.

“We call for the immediate release of these prisoners and other Papuans arrested for freedom of expression and for the investigation and prosecution of those responsible for the terrible violence perpetrated on them.”

A panel of judges at the Central Jakarta District Court found the six activists guilty of treason on April 24 for holding a protest in support of Papuan independence in front of the Presidential Palace in Jakarta in last August.

The defendants’ lawyer, Oky Wiratama, said she was disappointed with the verdicts and questioned the judicial process.

Amnesty International Indonesia director Usman Hamid said the treason charges might have been misused by the government against people who should never have been arrested or detained in the first place.

Students targeted
On August 16, the day before Indonesians celebrate independence, Papuan students in dormitories in East Java were targeted by students after rumours spread that the Papuans had “disrespected” the Indonesian flag.

Accounts of these attacks show Indonesian security forces directing attacks, and in later attacks participating in the violence against Papuans and Asia Pacific Report widely covered the crisis.

The challenge now is over the risks to these political prisoners languishing in their Indonesian jails. Reports suggest that covid-19 deaths in Indonesia may be substantially higher than officially reported. With the mass overcrowding, the prisons are likely to be vectors for the spread of the coronavirus.

In the Philippines, where jails are also congested, nearly 10,000 prisoners have been released in a bid to halt the spread of covid-19 after outbreaks at several facilities. While announcing the release of 9731prisoners, Associate Supreme Court Justice Mario Victor Leonen told media the justice system was “very much aware of the congested situation” in prisons.

‘Shameful’ media freedom threat
Meanwhile, World Press Freedom Day today is being marked by many statements honouring journalists and frontline workers at the heart of the coronavirus outbreak.

Among the first statements were from Australia’s Media, Entertainment and Arts Alliance (MEAA) union for journalists which called for serious reforms to reverse a raft of “national security” laws that can be used to criminalise journalism and punish whistleblowers for telling the truth.

The union said  that Australia’s reputation as a healthy democracy was now at risk, adding that it was “shameful” that on World Press Freedom Day, three journalists who were the subject of police raids last year “still have the threat of prosecution hanging over their heads”.

In MEAA’s just-released annual The War on Journalism report, 89 percent of 2472 respondents in a survey stated the health of press freedom was poor, or very poor – a sharp deterioration from 71.5 percent in 2019.

“While covid-19 casts a shadow over journalism, we celebrate the bravery of those on the reporting frontline,” declared Journalism Education and Research Association of Australia  (JERAA) president Dr Alex Wake.

She said there was little to celebrate this World Press Freedom Day with Australia slipping five places to 26th in the Reporters Without Borders (RSF) World Press Freedom Index  – New Zealand dropped two places to ninth, and other Pacific countries such as Papua New Guinea, Samoa and Tonga have also slumped.

“Covid-19 is casting our struggling news industry into deeper turmoil, populist world leaders are cheering on attacks on journalists, and funding cuts at Australian universities pose a looming threat to journalism education and research,” she said.

However, Dr Wake added that colleagues could “honour the extraordinary work of our frontline reporters, many of them just out of our classrooms, putting their own safety at risk covering the covid-19 pandemic”.