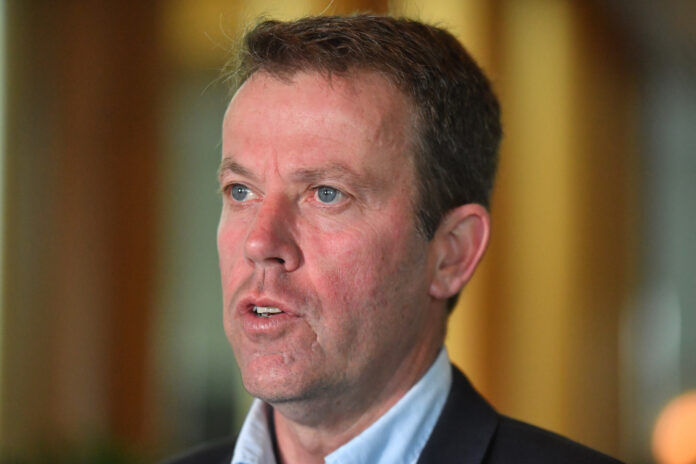 Scott Morrison was on the ball – and quickly on the phone. Hardly had education minister Dan Tehan finished giving Victorian premier Daniel Andrews a bollocking on the ABC’s Insiders than he received a call from the PM.

The Conversation understands that in his exchange with his leader, the minister’s tone was apologetic.

Not too long afterwards came a mea culpa from Tehan, the like of which we rarely see in politics.

Morrison might have wanted Tehan to deliver Andrews a touch-up, but not to go at him with a sledge hammer.

The federal government has been frustrated from the get-go with Andrews, who (with NSW’s Gladys Berejiklian) early on insisted on very tough measures generally, not just on schools.

Morrison would have liked schools fully open all through. As the weeks have passed he’s become increasingly annoyed with the slow progress back to normal. It’s a national patchwork, but the Victorian government is the most conservative, with online learning set to be maintained through term two, and classrooms available only for children for whom other arrangements can’t be made or who are vulnerable.

The federal government has direct control only over non-government schools and it has been using a mixture of threats and bribes – with Tehan the wielder of the (funding) whip and giver of (funding) sugar – to bend them to its will.

It’s against this background that Tehan gave his ill-judged interview on Sunday.

He was caught in knots from the start.

Parents should listen to the medical expert panel – made up of federal and state health officers – which said it was safe for schools to be open, he said.

But he struggled when confronted with Morrison’s April 16 advice that they should listen to their premiers. “If you live in Victoria, listen to the Victorian premier,” the PM said then.

David Speers put to Tehan that Victoria’s chief health officer’s advice had been not to re-open schools because keeping children at home could help suppress community transmission (it’s important to note the Victorian health advice is directed specifically to this issue of limiting wider community spread).

Speers asked: “coming back to what the Prime Minister said, should parents listen to their premier or not?” “This is a question for Dan Andrews,” Tehan replied, in a futile attempt to evade.

After more toing and froing, Tehan lashed out. “If the national medical expert advice is saying that it’s safe for children to be back in the classroom – then why wouldn’t they be?

“This is a failure of leadership by Dan Andrews, let’s be clear about that”.

Andrews was “jeopardising the national consensus”, Tehan said; unlike other states, Victoria had no plan. The children, especially the most disadvantaged, were suffering “and I think it’s time that we seriously call Dan Andrews out on this”.

It was actually Tehan who found himself called out – or called up.

Morrison has been biting his tongue over Andrews – a premier who is Labor, popular, and can’t be bullied – because the PM knows the benefit of the national cabinet and has learned, on occasion painfully, that the way to operate it effectively is to avoid over-reacting to differences within it.

In unfortunate timing, immediately after the Tehan outburst came a report that a Melbourne primary school will close from Monday to Wednesday after a music teacher has tested positive for COVID-19.

Praising the co-operation of leaders at the national cabinet, he said it was “important to note that this will not always result in all states and territories and the federal government agreeing on all points.”

The consistent advice from the expert medical panel had been that schools could be fully open, he said.

“Notwithstanding this position, the Victorian Chief Health Officer has provided more cautious advice to the Victorian Premier, who has been acting on this advice in relation to Victorian state schools.”

Tehan said he, and many other politicians, had heard countless stories of parents struggling with home schooling, and he referenced the problems of children missing out on their education.

The minister maintained he’d been thinking of these things “when I expressed my personal frustration that more schools weren’t starting more in-class learning in my home state.

“It was this frustration that led me to overstep the mark in questioning Premier Andrews’ leadership on this matter and I withdraw”.

He promised to “continue working constructively with my state counterparts as they run their state school systems to support them with the best medical and education expert advice the federal government can offer”.

Once again, the Morrison government has had to bow to state opinion, and this time it’s been particularly embarrassing.

Whether Andrews’ stand on the substance of the issue will ultimately be seen by parents as the correct one is another matter.