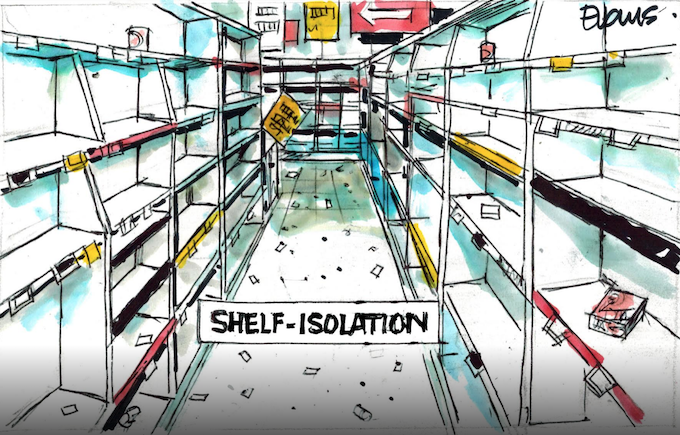 A South African celebrity jingle that has gone viral at the end of this week could easily have been a theme song for New Zealand when Prime Minister Jacinda Ardern declared a lockdown on Monday for midnight on Wednesday.

Several of South Africa’s most popular artists, such as Madjozi, Zolani Mahola and Francois van Coke, teamed up with the national groceries retailer Pick n Save to produce the rollicking “Don’t Panic Buy” in a bid to prevent stockpiling.

The lyrics urge shoppers to only buy what they really need and save the rest for fellow consumers, who may need it far more.

Written by Ard Matthews and produced by Theo Crous, the lyrics appeal to shoppers to only buy what they really need and save the rest for needy fellow customers. The song goes like this:

The video was featured on Al Jazeera’s Listening Post media programme last night and it could have been a hit for New Zealanders too when there was serious panic buying on Monday and Tuesday with breathless media commentaries after Ardern dropped her lockdown bombshell – a necessary lifesaving action – followed by a declaration of a state of emergency.

After the lockdown got under way though, a remarkable spirit of compliance, cooperation and goodwill took over across this nation of 5 million people. This prompted Ardern to sum up at the end of the week about progress with the “new normal” strategy:

Empty streets
“On Monday we said we needed to shut New Zealand down. And here we are on Thursday with our streets essentially empty. That is a remarkable feat and I want to thank the nation for that.”

By today, this was tempered by the first death in New Zealand from Covid-19 – a woman aged in her 70s, from the West Coast of the country, who had originally been diagnosed with influenza. All 21 medical staff who treated her were put on self-isolation.

“Today’s death is a reminder of the fight that we have on our hands,” Ardern said. “Stay at home, break the chain and save lives.”

The death and the rising case statistics, with 63 new cases, now up to 514, failed to dampen the buoyant spirits across the nation and in the media.

Paying tribute to a long tradition of New Zealand selflessness and community service, the nation’s largest newspaper, the Weekend Herald, declared in an editorial that it was grateful to be a “trusted source of news and information – as we have been since 1863”.

It added that the “struggle to overcome this microorganism will not be remembered for panic buying or quarantine breaches” but for many acts of humanity over the weeks, or months, ahead.

The newspaper reminded readers of the country’s pioneering “number-eight wire” attitude that helped establish early traditions, and noted that the “vicious virus has sparked a revival of kindness; watch out, it’s contagious”.

‘Feats of selflessness’
“History records are abundant with the feats of selflessness and heroism from past conflicts. The struggle to overcome this microorganism will not be remembered for panic-buying or quarantine breaches but for the acts of humanity which rose to the occasion,” said the editorial.

“The impending lockdown also initiated a run on garden centres and hardware stores, signalling a renaissance of the do-it-yourself, number-eight wire, ethos of the past – could this be Kiwi can-do on a comeback?”

To make the point, the Herald splashed across its frontpage the banner headline “Army of Kindhearts” and reported how 2500 New Zealand health workers had come out of retirement or cancelled parental leave to volunteer to rejoin the medical workforce.

“In all, 606 nurses, 587 doctors, 58 midwives and 203 medical laboratory scientists have committed to helping out.” However, the Ministry of Health has appealed for more volunteers.

New Zealand demonstrated an empathetic concern for its small Pacific Island neigbours by imposing self-isolation restrictions on travel to and from the region, but almost immediately cases of infection rapidly began. Oceania has become locked down  and the pandemic has dislodged climate change as the region’s number one priority.

The region’s hot spots so far have proven to be the American territory of Guam in Micronesia with 55 so far and the island region’s first death, French Polynesia with 34 and New Caledonia with 15.

Fiji with five, Northern Marianas with two and West Papua with one are well behind at this stage but there are fears over Papua New Guinea where, although its only confirmed case so far was an Australian mineworker who has already been repatriated, there is a sense of an impending tragedy based on trends in neighbouring Indonesia, and also Australia.

This unease has been fuelled by an internal government information war and confusion.

The news media has done a tremendous job over reporting the Pacific, including RNZ Pacific and ABC Radio Australia, with some individual journalists around the region excelling with insightful commentaries such as EMTV’s Scott Waide (with his personal blog), Barbara Dreaver’s Pacific Update and Bob Howarth and Antonio Sampaio in Timor-Leste.

As an attempt to boost the “positive stories” in the region’s media, The New Zealand Herald has launched a Go NZ! series and picking up on Prime Minister Ardern’s theme of “be kind” to others, its message is: “Kindness can be contagious. Spread well enough, it can overcome this threat.”