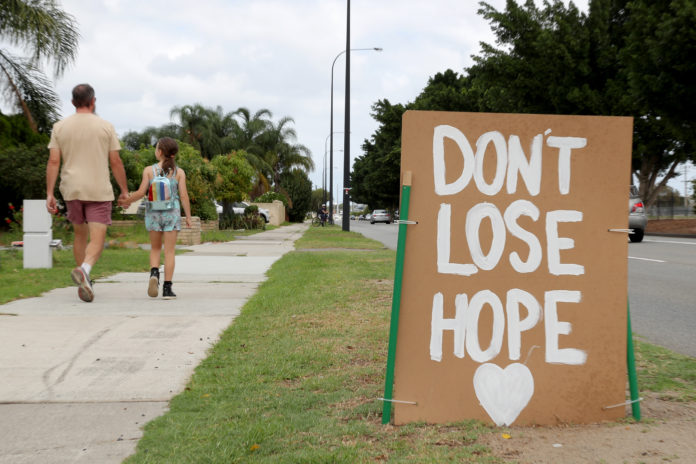 The federal government says there are signs the coronavirus curve may be flattening in Australia.

Scott Morrison told a Sunday news conference the rate of increase in cases had fallen to about 13-15% a day over the last few days, compared with 25-30% a day this time last week.

Health Minister Greg Hunt highlighted these numbers as “positive early signs of flattening of the curve”.

Hunt said there was much more work to do, but by people isolating and social distancing, “Australians are rising magnificently to this challenge”.

But Victoria’s chief health officer Brett Sutton tweeted on Saturday, after pictures of many people at the beach, “Some of the behaviour today – when we’re asking people to stay home – has been really crap.

“It’s hard to change habits and it’s hard to see dangers that aren’t apparent yet. But with 3,000 cases of COVID in Australia this week, we’re headed to 100,000 in 2-3 weeks without change.”

As debates rage about how the crisis should be handling on both the health and economic fronts, The Conversation has learned the Prime Minister’s office heard sharply conflicting views from two economists at a dinner in Parliament House’s private dining room on Tuesday March 17.

The economists were Henry Ergas, who previously worked at the OECD and has advised companies and governments, and Warwick McKibbin, professor of public policy at the Australian National University. Present were Scott Morrison’s chief of staff John Kunkel and senior bureaucrats.

The view Ergas presented was substantially the same as he wrote in the Australian on Friday when he warned of the dangers of going “too far” in trying to combat the spread of the virus.

He wrote: “Whatever governments do should preserve, to the greatest extent possible, the economy’s ability to rebound, including by limiting the debt that is loaded on to companies and individuals.

“Would such an approach save as many lives as a complete shutdown? Possibly not. However, if it could achieve two-thirds of the health objectives at one-third the costs, it would be reckless not to choose it”.

McKibbin argued the line of epidemiologists that it was best to try to stop the spread as fast and comprehensively as possible, with drastic measures.

He proposed companies and individuals should be supported with a system of contingent loans – like the student loan scheme – that would be paid back later via the tax system but only when the firm of individual passed, respectively, a certain cash flow or income level.

Morrison has repeatedly given equivalence to the health crisis and the economic crisis. The government will release within days its third package of economic support which will aim to put businesses into “hibernation” so they can restart later. Speculation has been that it will include a wage subsidy.

On Sunday Morrison appealed to employers to wait to see the package before doing anything.

“I would say to employers, who I know are going through very difficult times, these changes will be announced soon and I would ask that before you make any further decisions that you take the opportunity to see the further measures.”

Morrison said the next package would be “bigger than anything you have so far seen”. The last package was $66 billion.

It would “ensure that we are working together with companies to keep people connected to companies”.

The package would include support for those who had recently been the victims of closures.