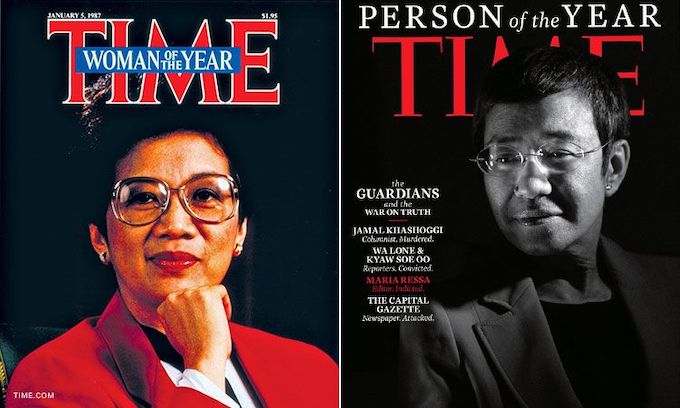 By Rappler in Manila

Rappler CEO Maria Ressa is among Time‘s “100 Women of the Year”, the news magazine has revealed ahead of International Women’s Day on Sunday.

“This includes women who occupied positions from which the men were often chosen, like world leaders Golda Meir and Corazon Aquino, but far more who found their influence through activism or culture,” the magazine said.

READ MORE: Time magazine’s ‘100 women of the year’ – and the century

Time recognised Ressa as its Woman of the Year for 2018, noting her already impressive career in news before starting Rappler in 2012.

“But the news site turned into a global bellwether for free, accurate information at the vortex of two malign forces: one was the angry populism of an elected president with authoritarian inclinations, Rodrigo Duterte; the other was social media,” the magazine wrote in its article about Ressa.

Time said that, since naming her as a 2018 “Person of the Year,” Ressa “has continued to navigate the murk between social media and despotism, calling out her findings to the rest of us at the risk of her life”.

Other women from Southeast Asia who made it to the list include late Philippine president Corazon Aquino (1986) and Myanmar’s civilian leader Aung San Suu Kyi (1990).

Aquino was named Woman of the Year in 1986 after the democracy icon won the presidency and ended the nearly 21-year dictatorship of Ferdinand Marcos.

Former Time editor-in-chief Nancy Gibbs said of the project: “The women profiled here enlarged their world and explored new ones, broke free of convention and constraint, welcomed into community the lost and left behind.

“They were the different drummers, to whose beat a century marched without always even knowing it.”

“Women,” Gibbs writes, “were wielding soft power long before the concept was defined.”