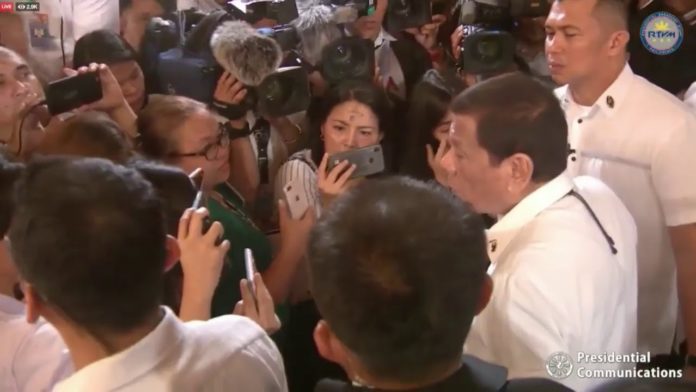 President Rodrigo Duterte administers the oath of office to the National Commission for Culture and the Arts (NCCA) officials in a ceremony at the Rizal Hall in Malacañang Palace on February 26, 2020. Video: Rappler

Reporters have finally got the chance to ask President Rodrigo Duterte on Wednesday whether he would sign a bill granting a new franchise for TV giant ABS-CBN. His response: “I’ll cross the bridge when I get there.”

Duterte, speaking for the first time since his top aide, Senator Christopher Lawrence “Bong” Go, said in a Senate inquiry on Monday that he was displeased with ABS-CBN’s refusal to air a political ad during the 2016 presidential campaign, said he would be put in a “difficult position” if the bill arrived on his desk.

He said he might even ask media to help him out on making a decision. “I will cross the bridge when I am there. Maybe I will call the media to help me out. It is a difficult decision really,” Duterte told reporters following an oath-taking of officials at Malacañang Palace.

READ MORE: The ANC Brief – a threat to press freedom

Duterte nonetheless accepted the apology made by ABS-CBN president Carlo Katigbak over the non-airing of the ad, which Duterte supporters have used as evidence of the network’s alleged bias against the president.

ABS-CBN has said ad limits in the final stretch of the 2016 campaign prevented the airing of the ad. The ad was in response to an attack ad paid for by Duterte’s arch-critic, then senator Antonio Trillanes IV, featuring children reacting to clips of Duterte uttering bad language.

Duterte did not accept a P2.6-million refund from ABS-CBN. On Wednesday, he said ABS-CBN could give it to a “charitable institution of their choice”.

The president also claimed that he had no hand in the quo warranto case filed by Solicitor-General Jose Calida before the Supreme Court, in which the top government lawyer accused ABS-CBN of violating the terms and conditions of its 25-year franchise, which expires on March 30.

‘Healthy distance’
“I kept a healthy distance from it…they are now deliberating in Congress: the lower house (House of Representatives) and the Senate. There is a plan that they will pass a joint resolution. But fundamentally really the decision is with the House, not so much in the Senate, because the constitution says all of these things must originate from the lower house,” Duterte said.

“I leave it to Congress,” he added.

The tussle over the ABS-CBN franchise is widely viewed as a press freedom issue. Duterte last year vowed to block the network’s franchise and accused it of serving as a mouthpiece for the opposition and the “oligarchs”.

The government previously sued Rappler, a news website critical of Duterte, for tax evasion and violating the constitutional ban on foreign ownership in mass media, and barred Rappler reporters from covering government events.

Calida’s petition does not cite the non-airing of the ad. It claims that ABS-CBN went around the foreign ownership ban by accepting investments from foreigners through investment instruments known as Philippine Depositary Receipts (PDRs). It also claimed that ABS-CBN illegally charged subscribers to a digital movie channel and illegally acquired a franchise for a mobile phone service.

ABS-CBN has denied any wrongdoing, and told the Supreme Court on Monday that it had the necessary licences from the National Telecommunications Commission.

Also on Monday, the Securities and Exchange Commission said ABS-CBN did not violate the law in issuing PDRs, which entitles holders only to dividends and not ownership.

The Bureau of Internal Revenue also said the TV network did not owe any taxes to the government, refuting claims by Duterte supporters on social media that ABS-CBN was cheating on its tax payments.