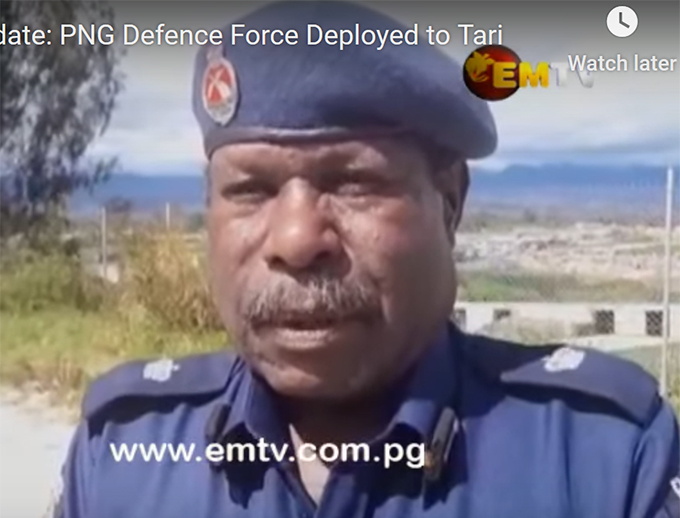 Police Minister Bryan Kramer announcing he would be in Tari to work with police to find a long term solution to tribal fights. Video report: EMTV News

Papua New Guinea’s Defence Force has been deployed to Tari, Hela Province, to assess and investigate the situation where 23 people were hacked to death.

Police Minister Bryan Kramer yesterday announcing he would be in Tari to assess the situation and work with police to find a long term solution to tribal fights that continue to take innocent lives.

In an earlier report, EMTV’s Scott Waide who visited the scene reported:

New information verified by EMTV now puts the total death toll from the recent killings in the Hela Province at 23.

The murders happened in the Tagali Local Level Government (LLG) area between Sunday and Monday.

On Monday morning, 16 women and children in Karida village were hacked to death. They included two unborn babies.

Tribal clashes
The attacks are reported to be part of tribal clashes, ongoing for more than 20 years involving multiple clans.

Hela Provincial Administrator William Bando called a law and order committee meeting on Wednesday in Tari to work plan out a course of action.

He also called for the Royal Papua New Guinea Constabulary command to recall the Tari-based police mobile squad currently based at the Exxon-Mobil site at Hides.

“We are also asking for support from the PNGDF command. We have a platoon based at based at Hides,” he said.

“I am calling on them to assist us here in Tari. If possible, we would like one more platoon to be sent here to Tari at the Provincial Government expense. We are willing to do that.

“We currently have only 40 police for the whole province. Our Tari-based MS 9 were taken by Exxon-Mobil to provide security, while our people are dying,” Bando said.

Along with other members of the Hela Law and order committee, he ideclared the Tagali LLG a fighting zone.

“This kind of killing of women and children is unprecedented. It has never happened here in Tari and we are very concerned,” Bando said.

The Provincial Administrator has also issued a warning against traveling along the Tari-Koroba road due to “spillover violence” from the tribal fighting in the Tagali LLG area.

Thanks to the internet, we know what’s happening in Myanmar. But a communication blackout may be near

Women are (rightly) angry. Now they need a plan