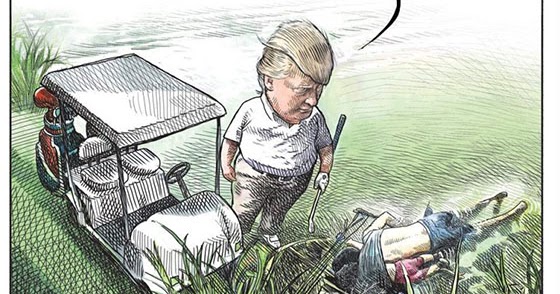 By CAFE PACIFIC
CANADA’S “most read” cartoonist has been “let go” from all newspapers in New Brunswick, apparently over a Trump and migrants cartoon that went viral.

The above cartoon was the one that apparently caused the fuss.

“The highs and lows of cartooning. Today I was just let go from all newspapers in New Brunswick.”

Michael de Adder was born, raised, and educated in New Brunswick province and was a regular presence in its newspapers.

Brunswick News Inc., which owns the Saint John Telegraph-Journal, the Moncton Times & Transcript, and the Fredericton Daily Gleaner, has now disassociated itself from de Adder.

“Technically I wasn’t fired. I was under contract not employed,” he added.

But he isn’t too fazed – “it’s a setback not a deathblow”. He has a new book coming out with a collection of his cartoons, You Might Be From New Brunswick If …

According to Wikipedia, de Adder “draws approximately 10 cartoons weekly and, at over a million readers per day, he is considered the most read cartoonist in Canada.”

Wes Tyrell, president of the Association of Canadian Cartoonists, said in a statement:

“Cartoonist Michael de Adder was let go from his job drawing editorial cartoons for all the major New Brunswick newspapers 24 hours after his Donald Trump cartoon went viral on social media, a job he held for 17 years.

“Although he has stated there was no reason given for his firing, the timing was no coincidence.

“Michael told me once that not only were the J.D. Irving owned New Brunswick newspapers challenging to work for, but there were a series of taboo subjects he could not touch. One of these taboo subjects was Donald Trump.”