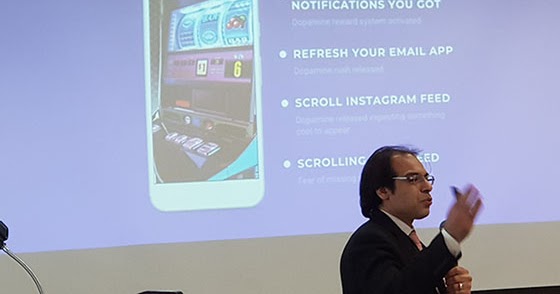 By DAVID ROBIE in Bangkok

A LEADING cyber security expert has called on universities to play a more active role in implementing ethics and legal frameworks for communications smart technology to save society from an Orwellian future.

In an era of “accelerated addictiveness” to smartphone and other digital technologies, he told media researchers, policy advisers and journalists at the recent 27th Asian Media Information and Communication (AMIC) conference in Bangkok, Thailand, that it was vital for democracy that universities stepped up.

Addressing the “persuasive technologies” industry, Dr El-Guindy spoke about being “hooked”, the “scrolling dopamine loop” and the “digital skinner box” models and how they had made smartphones fill psychological needs.

“Our social fabric is being torn apart,” he said. “As we expect more from technology, we expect less from each other as people.

“We have suffered a loss of ability to focus without distraction. The result is mental health issues, less empathy and more confusion.”

He quoted from educator and media theorist Neil Postman’s book Amusing Ourselves to Death: Public Discourse in the Age of Show Business, originally published in 1985 and drawn from a talk reflecting on George Orwell’s 1984.

“Orwell warns that we will be overcome by an externally imposed oppression. But in [Aldous] Huxley’s vision, no Big Brother is required to deprive people of their autonomy, maturity and history. As he saw it, people will come to love their oppression, to ignore the technologies that undo their capacity to think.”

In a separate address, Dr El-Guindy and other presenters spoke about facial recognition technologies, voice generators that can put words in people’s mouths and how artificial intelligence is compromising and undermining privacy.

The three-day AMIC conference at Chulalongkorn University featured the theme “Are you human? Communication, Technology and New Humanism”.

AMIC board chair Professor Crispin Maslog challenged the more than 200 participants to take a more “humanist” approach to communication research and policy building.

“We stand on the brink of a technological revolution that will fundamentally alter the way we live, work, and relate to one another,” he said. “In its scale, scope and complexity, the transformation will be unlike anything humankind has experienced before.

“As the millennials would say, OMG!”

Developed as a guide for journalists in the Asia-Pacific region, it has been co-authored with New Zealand’s Pacific Media Centre director Professor David Robie and regional editor Joel Adriano of SciDev.Net, a leading online publication with a focus of science and development.

Among several UNESCO delegates and speakers at the conference, Dorothy Gordon, of the governing board of the UNESCO Institute for Information Technologies in Education, called on participants to lobby through their national commissions and global agencies if they wanted action.

“Asia has the potential to be in control, it can make changes for tech for peace,” she said. “UNESCO is made up of member states. If you want something to happen, you need to lobby your own country first to take up the issue.”

Malaysia’s Dr Azman Azwan Azmawati, an associate professor at the Universiti Sains Malaysia (USM) in Penang and president of the Asian Congress for Media and Communication (ACMC), called for more critical research on patriarchal systems.

Power imbalance
Much more research was needed to focus on the imbalance of power – ‘deconstructing the power of the powerful over the powerless.

“Cultural norms and mindsets must be re-examined, critiqued, reevaluated and rethought.”

“Global justice can be a legitimate ethical objective of advocacy journalism, requiring factuality as a platform,” he said.

“It is achievable in some cases through a wise and intentional position of ‘advocacy journalism’ which sits comfortably with the professional values of the livelihood of journalists.”

Dr Pearson, author of The Journalist’s Guide to Media Law, also spoke about “mindful journalism”, a form of journalism with “wisdom and compassion” drawing from elements of secular Buddhist approaches to meditation and ethics.

He dedicated a separate paper on the topic to the memory of Dr Shelton Gunaratne, who died in March this year after being awarded the 2016 AMIC Asia Communication Award for his “ground-breaking scholarship and intellectual contribution to Asian media and communication research”.

Taiwan’s Professor Georgette Wang of the National Chengchi University engaged with the debate about Asian research methodologies, saying that perhaps the right questions were not being asked.

She said there was an absence of “East-West dialogue” over research methodologies and there needed to be more engagement. Blaming globalisation, she said that while the “periphery” had gained greater presence in the international arena, it had also “brought the profile of theories and questions originating in the West to greater prominence”.

Instead of rejecting Western research models in an Asian context, more effort was needed to “develop a new paradigm” drawing on both East-West traditions.