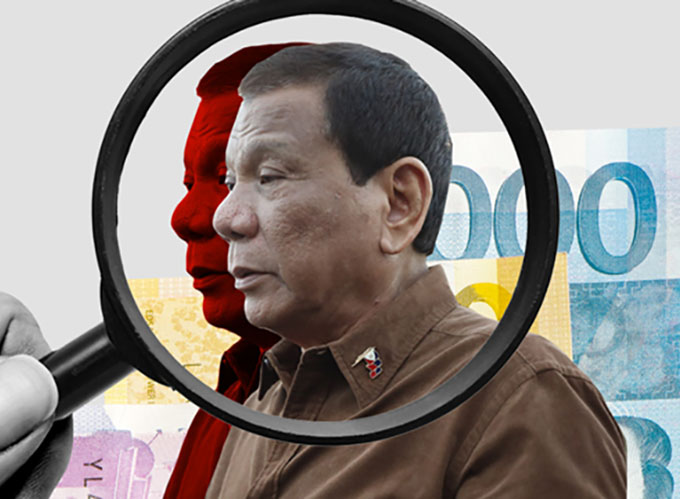 The Philippine Center for Investigative Journalism looks into the wealth of President Rodrigo Duterte and his family, drawing the ire of the President. Duterte. Image: Rappler montage/Malacañang/Shutterstock

The Philippine Center for Investigative Journalism has responded to what it called President Rodrigo Duterte’s “broadsides” aimed at PCIJ’s recent reports on the Duterte family’s wealth, saying there was no reason for the President to “lose his cool”.

“The PCIJ report was built on the Dutertes’ own declarations in their SALNs (Statements of Assets, Liabilities, and Net Worth) and data from official government records,” said PCIJ executive director Malou Mangahas in a letter sent to media groups.

“PCIJ had wished only for the Dutertes to offer clear, direct, straightforward replies to our queries. Instead of blaming PCIJ for the report. Mr Duterte should turn his attention [to] his deputies, notably Presidential Legal Counsel Salvador Panelo, for the failure of [the] Office of the President to attend to PCIJ’s request letters, over the last 5 months.” 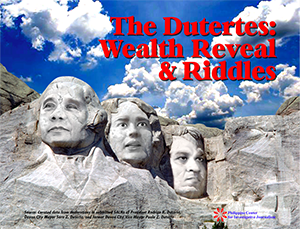 On Saturday, April 6, the President claimed it was money driving investigative reports. While he did not mention PCIJ by name, the comments were made in the aftermath of the investigative group’s three-part report, “The Dutertes: Wealth Reveal & Riddles”.

(Look at how those in investigative journalism think…. It’s all about money. They get paid a huge sum if the story is that big. They even included my lawyering.)

The series reported that members of the Duterte family may have participated in conflicts of interest, declared assets inconsistently, were affiliated with an unregistered law firm, were found with “sudden, sharp” increases in wealth while in public office, and emerged from elections with their personal funds largely intact.

Opaque data
President Duterte and his children Sara and Paolo separately and together offer token or opaque data that, under the law, they are required to reveal in their SALNs
Duterte, Sara, Paolo mark big spikes in wealth, cash while in public office

How and why their fortunes are rising remain a mystery; the numbers do not seem to add up, reports PCIJ

The President said his late mother, Soledad Roa Duterte, was responsible for the family’s wealth.

Better to have responded
PCIJ said it has reported on the wealth and the controversies of 5 presidents before Duterte: Benigno Aquino III, Gloria Macapagal Arroyo, Joseph Estrada, Fidel Ramos, and Corazon Aquino.

PCIJ detailed its efforts to solicit comments from the Duterte camp in letters sent beginning October 2018. According to Mangahas, it would have been “far better had Mr Duterte, daughter and Davao City Mayor Sara, and son and former Davao City vice mayor Paolo granted PCIJ’s request for comments, and possibly sit-down interviews, before the story ran.”

(Now, my children and I are being attacked. All about lawyering. What do they care about what happened to my law office?)

Among its findings, PCIJ reported that “the President, Sara, and Paolo separately and together offer a muddled mix of token or opaque data” in their SALNs.

PCIJ found spikes in the net worth of Duterte and his children. PCIJ said the President, Sara, and Paolo “have all consistently grown richer over the years, even on the modest salaries they have received for various public posts, and despite the negligible retained earnings reflected in the financial statements of the companies they own or co-own.”

The numbers, said the investigative group, “do not seem to add up.”

The Pacific Media Centre and Pacific Media Watch collaborate with Rappler and the Philippine Centre for Investigative Journalism.