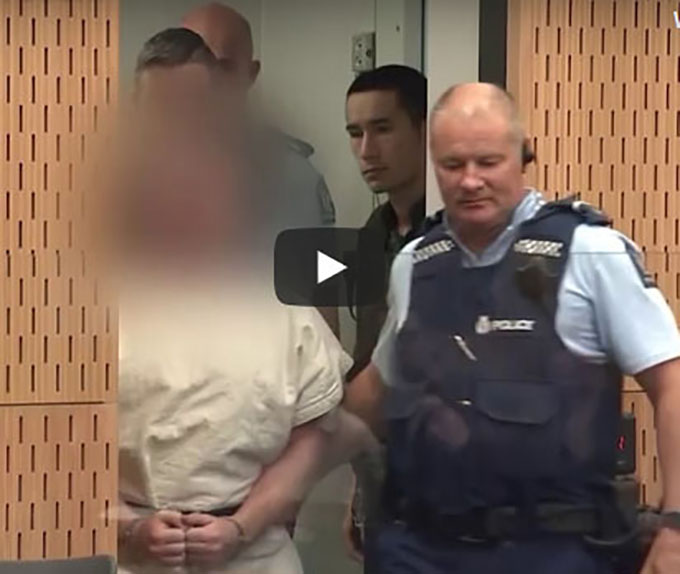 Brenton Tarrant at his first court hearing on March 16 in the Christchurch District Court. Image: EveningReportNZ/Screengrab of TVNZ coverage

The man charged over the Christchurch mosque shootings last month appeared in the High Court in Christchurch today, accused of killing 50 people.

Brenton Tarrant, 28, appeared via a video link from Auckland Prison for what was a quiet, ordered hearing.

The public gallery was packed to standing capacity with members of the Muslim community and journalists from New Zealand and around the world.

Armed police were outside as survivors and relatives of victims of the attack arrived at court.

Women in hijabs hugged one another as they arrived at the courtroom. Senior police officers, including Detective Inspectors Dave Lynch and Greg Murton, were seated in the front row of the public gallery.

The defendant was able to see the judge and lawyers and hear the proceeding but the camera was turned away from the public gallery.

His manner was calm thoughout the hearing as he intently listened to the proceedings; his screen was muted.

Single charge
It is the defendant’s second court appearance, after briefly appearing in Christchurch District Court on March 16, the day after the mosque attacks. At that hearing police had laid a single charge of murder.

He now faces 50 charges of murder and 39 of attempted murder.

Justice Cameron Mander formally recorded that a further 49 charges of murder and 39 of attempted murder had been filed by the Crown.

He noted the initial murder charge, which named a woman who was in fact alive, was to be amended and suppressed that woman’s name.

The judge also suppressed the names of the attempted murder victims.

Two Auckland lawyers, Shane Tait and Jonathan Hudson, were to represent the accused. Tait issued a brief statement last night saying the right to consult and instruct a lawyer, and the right to a fair and public hearing, were protected rights in New Zealand law.

Justice Mander ordered that two mental health reports be completed to assess the defendant’s fitness to plead. He remanded him in custody without plea to next appear on June 14.

Victim families briefed
The families of the victims of the mosque attack were briefed about the court appearance by court officials and victims’ advisors.

Media had the right to be present and report on the hearing – other than any discussions held in chambers, as is usual court procedure – but the judge had declined applications from New Zealand and overseas media to film, take photos and record sound.

The starting principle on such applications is open justice, but it is up to the judge to decide whether it is appropriate and in this case Justice Mander found it was not.

In a minute issued to media, he said he had taken into account a number of factors in reaching his decision, including the need to preserve the integrity of the trial, the role of the media, and the court’s obligations to the victims of the massacre.