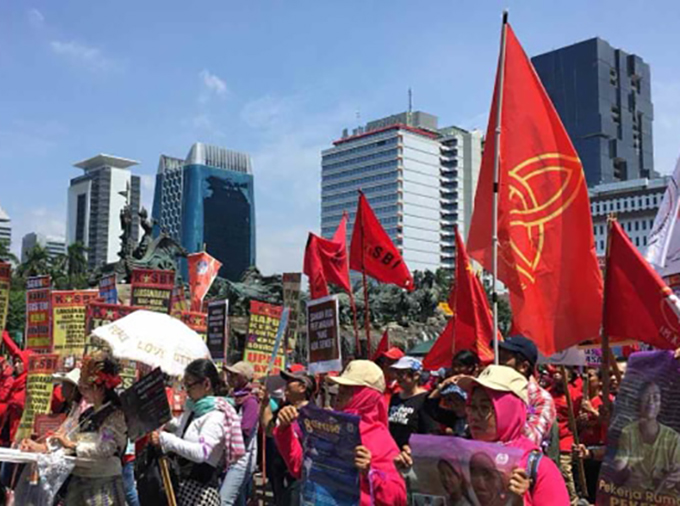 Hundreds of women’s rights activists commemorating International Women’s Day yesterday gathered near the Horse Statue monument before holding a long march to the Aspiration Park in front of the State Palace in Central Jakarta.

IWD is commemorated globally on March 8 to commemorate the gains won by women working in economic, political and social fields.

The protesters, who wore various kinds of head bands, arm bands and purple banners, were not just made up of women, but men who also took part calling for women’s equality.

Taking up the momentum of the 2019 presidential and legislative elections, the theme taken up IWD 2019 was “An Independent Political Platform for Women”.

This year’s peaceful action focused on the movement to awaken women’s consciousness and demand political space for women which is democratic, equal and free from violence.

“We know that the state has failed to provide security and protection for us, women, because we are still seen as objects, we are seen as dead objects which have a voice but our voices are never listened to, our voices have been lost from the Indonesian political stage”, said IWD committee member Dian Septi in a speech.

‘Child marriage, no!’
The peaceful action was also aimed at calling for women’s rights and other demands such the exploitation of women, sexual violence, decent wages, polygamy, child marriage and for the ratification of the Draft Law on the Elimination of Sexual Violence (RUU PKS).

Following the action, representatives from IWD 2019 planned to meet with the Minister for Women’s Empowerment and Child Protection in order to convey eight types of problems being faced by women: