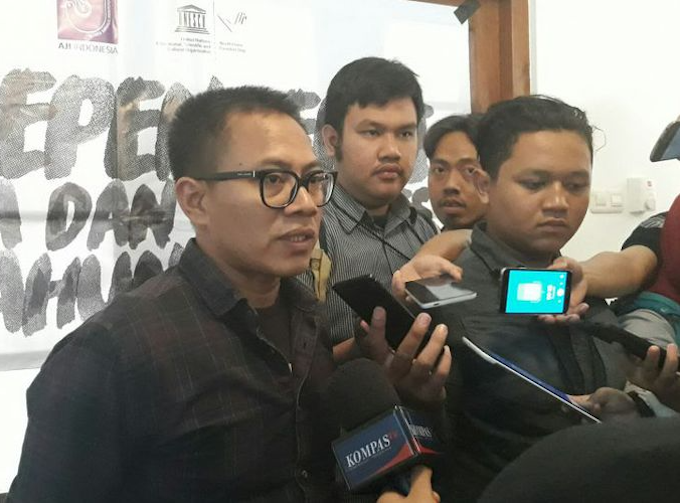 The Alliance of Independent Journalists (AJI) has called on the Indonesian police to release Jakarta State University lecturer Robertus Robet who has been indicted on charges of insulting the authorities or a public agency.

AJI says that a speech given by Robert during a Kamisan (Thursday) action in front of the State Palace on February 28 which touched on the dual socio-political role (dwi-fungsi) of ABRI — an abbreviation for the Indonesian Armed Forces, now called TNI — was an act of free expression by a citizen which is guaranteed under Article 28E Paragraph (3) of the 1945 Constitution (UUD 1945).

“Expressing a view is part of human rights as enshrined in the Universal Declaration of Human Rights,” said AJI chairperson Abdul Manan in a written press release yesterday.

According to AJI, Robet’s arrest shows that there was no difference between the current regime of President Joko “Jokowi” Widodo and the New Order regime of former president Suharto which curbed freedom of expression and opinion.

AJI condemned Robet’s arrest because it was done without any clear legal basis.

AJI is also urging the police to immediately release Robet and respect human rights which guarantee citizens the right freedom of opinion and expression as regulated under the UUD 1945.

‘Rubber articles’
Finally, AJI is calling for the “rubber articles” (catchall articles) in the Electronic Transaction and Information law (UU ITE) and the Criminal Code (KUHP) to be annulled.

“We call for the annulment of the rubber articles in the UU ITE and the KUHP which are frequently used to criminalise human rights defenders, including journalists,” he said.

Police have declared Robet a suspect in a case of alleged criminal defamation against the authorities or a public agency in Indonesia.

Robet is alleged to have disseminated information aimed at creating hatred and animosity against individuals and or social groups based on SARA (ethnic, religion, race and inter-group issues), fake news or defamation against the authorities or a public agency.

Robet is alleged to have committed this crime when he was giving a speech at the Kamisan action on February 28 about ABRI’s dwi-fungsi.

In the speech, Robert sang a song which was popular among the 1998 students movement to satirise the ABRI.