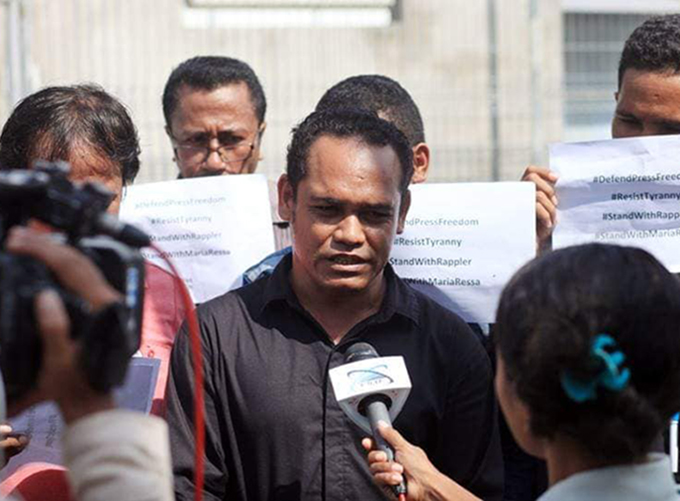 The Timor-Leste Press Union has protested in front of the Philippine Embassy in the capital Dili in solidarity with indicted Journalist Maria Ressa over her “persecution” and in defence of freedom of the press.

Rappler CEO and editor Maria Ressa is known and respected for her work as a journalist in bringing the plight of the suffering people of Timor-Leste under a quarter century of Indonesian occupation prior to renewed independence in 1999.

The Timorese journalist protest was broadcast by the public broadcaster RTTL.

The Philippine Daily Inquirer, one of the leading Philippine national dailies, reported today that Ressa had accused President Rodrigo Duterte’s administration of acting like a dictatorship and using the law as a weapon to muzzle dissent.

“What we’re seeing … is a level of impunity that I frankly haven’t seen, and I’ve been a journalist for more than 30 some odd years,” Ressa said after posting bail in a Manila court on Thursday.

Ressa, who was selected by Time magazine as one of its Persons of the Year last year, is the head of Rappler Inc., which has aggressively covered Duterte’s administration. 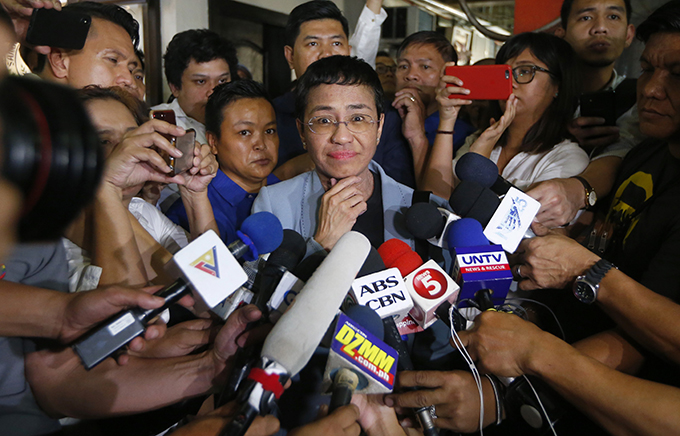 Rappler publisher Maria Ressa speaking at a media conference after her release on bail in Manila. Image: Philippine Daily Inquirer

She was arrested Wednesday over a libel complaint from a businessman. Duterte’s government claimed the arrest was a normal step in response to the complaint and had nothing to do with press freedom.

Universities condemn arrest
University leaders and student groups in the Philippines have also condemned the arrest of Ressa, saying schools must defend the truth and press freedom, reports Rappler.

“The university shares Maria’s challenge to shine the light on power and be brave in witnessing to the truth. Veritas liberabit vos (The truth will set you free),” Villarin said.

“Lies and false promises of unbridled power, when met with silence, will only make us a nation of slaves,” he added.

Luistro urged Lasallians to “vote with their feet” in the upcoming 2019 elections and make their voices heard to defend press freedom.

Ressa was arrested in connection with a cyber libel case filed by the Justice Department.

The University of the Philippines (UP) Diliman Student Council and ADMU publication The Guidon denounced the arrest, saying students would continue to hold the line with Ressa and Rappler.

‘Make our voices heard’
Here are the statements of support from various schools:

“Let’s give our all out support as Lasallians to Rappler. Let’s defend press freedom. Let’s make our voices heard. Let’s vote with our feet and stand with Maria Ressa!”

“There are several rights and freedoms necessary for a democratic society to function. The right to life, the right to due process, the sweet freedoms of speech and of the press – all of these were once considered sacred, inviolable. But as of late these have been called into question; mocked, attacked, degraded.

“Rappler, and its brave leader Maria Ressa, have consistently held the line against the erosion of these liberties. It is journalists like her who keep us all informed about the state of our nation, covering different areas of our national life, contributing immeasurably to the wealth and value of our country.

“Too often these days, it is they who wage daily battles against fake news, expose corruption and bring to light illegal practices and wrongdoing by those who lead us.”

View from The Hill: Morrison’s net-zero plan is built more on politics than detailed policy