By Iris Gonzales in Manila

The Philippine press has seen many dark days but Maria Ressa’s arrest this week is among the worst.

It signals dangerous times for our country’s democracy, 33 years since it was restored in 1986.

Ressa is a veteran journalist who founded the news website Rappler – and a thorn in the side of President Rodrigo Duterte.

The feisty journalist, hailed as Time Person of the Year for 2018, was arrested around 5 pm on Wednesday, February 13, by officers of the National Bureau of Investigation (NBI). 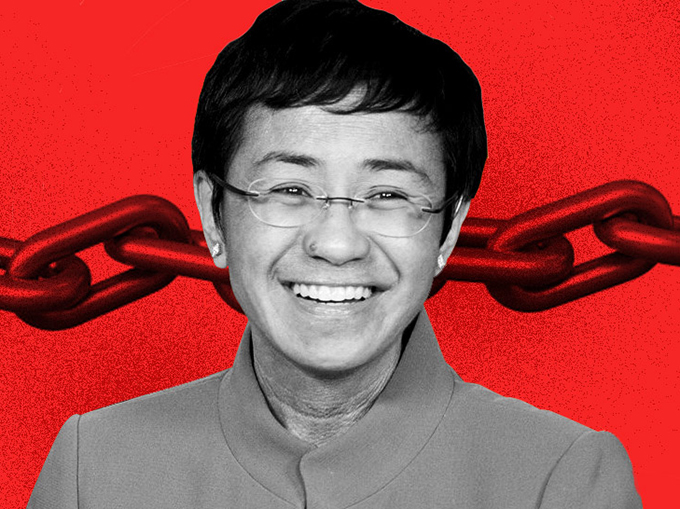 Maria Ressa … “You have to be outraged like what I’m doing now.” Image: Maria Ressa FB

The arrest warrant was issued by a local court the day before in connection with a “cyber-libel” case filed by the Philippine Department of Justice against Ressa and former Rappler researcher Reynaldo Santos Jr.

The case relates to a story published in May 2012. However, the cyber libel law the story allegedly violated was enacted in September 2012 – some four months later.

The Justice Department filed the case following a complaint lodged by business person Wilfredo Keng, whom Rappler identified in an article as having alleged links to illegal drugs and human trafficking, based on intelligence reports.

‘Abuse of power’
Ressa described her indictment and arrest this week as an “abuse of power” and “weaponisation of the law” against a citizen. She had to spend a night at the NBI office because her warrant was served at 5 pm – a time when government offices were already closed, making it impossible for Ressa to post bail.

The following day she was granted temporary liberty, after posting a P100,000 (US$1900) bail bond at a Manila court.

“These legal acrobatics show how far the government will go to silence journalists, including the pettiness of forcing me to spend the night in jail,” she said.

While Keng had every right to seek redress in the courts, Ressa’s arrest indicates a readiness of government officials to use their power and weaponise the law to go after individuals they perceive as enemies or threats.

Every journalist or critic of the administration is vulnerable. Every action which the government may not like may be put under scrutiny and brought to court.

Let us not forget that President Duterte’s critic, Senator Leila de Lima, is still in jail because of trumped up drug-related charges.

This time, it’s Ressa who is being harassed by the government. But she won’t take it sitting down.

‘Be outraged’
“I’m saying and I’m appealing to you not to be silent, especially if you’re next. You have to be outraged like what I’m doing now,” she said minutes after posting bail.

In a statement, Rappler warned: “No one is safe.”

Apart from cyber-libel, Ressa and Rappler are facing five tax cases. In December 2018, Ressa posted bail twice over alleged violation of the Tax Code. Rappler has also faced revocation of its corporate registration papers by the Securities and Exchange Commission

But, headed by some of the country’s best investigative journalists, Rappler said it would not be cowed by attempts at intimidation and vowed to continue its journalistic duties. ‘We will continue to tell the truth and report what we see and hear. We are first and foremost journalists.’

Ressa’s case will come up in March but her lawyer JJ Disini said they would file a motion to quash and question the information regarding the cyber libel case filed against his client.

The Consortium on Democracy and Disinformation, a group of journalists, bloggers and other cause-oriented individuals, has condemned what happened and strongly denounced the continuing harassment of Ressa.

“Her arrest,” it said, “is a betrayal of the guarantees of press freedom and freedom of expressed enshrined in the Constitution. More, its callous execution is an indictment of a weakened justice system; its devious grounds a dangerous fabrication that affects not just journalists, but everyone.”

The international Committee to Protect Journalists (CPJ) and Reporters Without Borders (RSF) have also denounced Ressa’s arrest as “an outrage”.

What happened to Ressa can happen to anyone in my country. Every freedom-loving Filipino must realize this and should stand up against any action that will curtail our freedom as individuals.

As Rappler says, we must all hold the line.

Iris Cecilia Gonzales is a Filipino journalist and blogger. This article has been republished from New Internationalist.