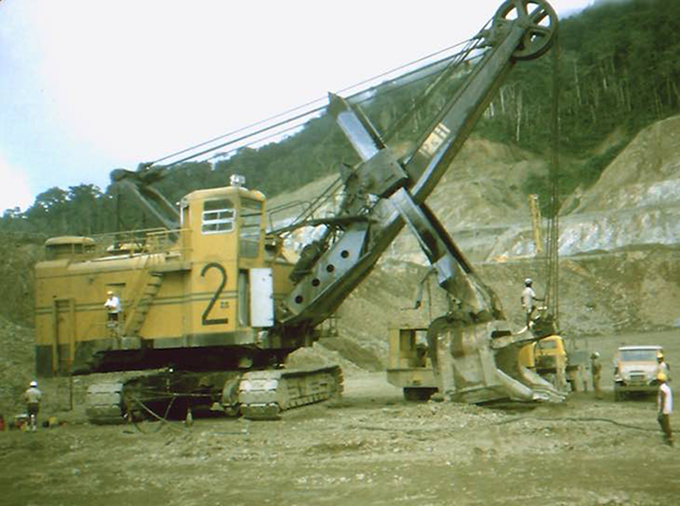 Panguna mine in operation … back in its heyday around 1971. Image: Robert Owen Winkler/Wikimedia Commons/PNG Mine Watch

The Autonomous Bougainville Government, led by president Dr John Momis, has been accused by a research and advocacy group of allowing a “reckless land grab” with its planned mining law changes.

The proposed amendments to the 2015 Bougainville Mining Act, along with accompanying legislation, will give the ABG the power to hand over mining leases to all parts of the island not under existing leases to Bougainville Advanced Mining, a new entity created for this purpose.

The ABG would have 60 percent ownership of Bougainville Advanced Mining, while 40 percent would be owned by a foreign partner.

“These are radical changes and appear to be nothing more than a reckless land grab,” Jubilee Australia’s executive director Dr Luke Fletcher said in a statement.

“First, this would hand over control of the majority of the island to the President and his foreign partner, Mr McGlinn.

“Second, the president would have the power to unilaterally distribute leases without any consultation or permission from landowners.

‘Cut out of process’
“As a result, landowners will be cut out of the process. These amendments undermine the principal of free, prior and informed consent,” said Dr Fletcher.

“Doing so is both anathema to Melanesian culture and vitally important in the Bougainville context.

“It is not clear to us that this legislation is even constitutional,” said Dr Fletcher.

“It is a startling and dangerous move. Given the disastrous history of the Panguna mine in Bougainville, which has caused irreparable environmental damage to the Jaba river and was the major cause of the Pacific region’s worst ever civil war, forcing through such enormous changes with very little consultation is a reckless and desperate ploy.”

“The people of Bougainville are determined to have the referendum and they must find the money to fund the referendum,” the President reportedly.

“One way of doing it would be if we started our own company and generated the revenue to enable us to conduct the referendum. We cannot sit on our hands.

Dubious over plans
However, Dr Flectcher said: “As our recent study of the question demonstrates, we are highly dubious that mines like Panguna could ever raise enough revenue to satisfy both foreign investors and the people of Bougainville,’ said Dr Fletcher.

“It is certainly impossible that the mine will raise any revenue before the independence vote.

“It will take years for the building/repair of infrastructure, the completion of environmental studies and other importance processes that need to take place before the mine can generate revenue.”

The Panguna mine was one of the world’s biggest copper-gold mines until a 10-year civil war forced its closure in 1989.

The war cost up to 20,000 lives and displaced 10,000 people. The Panguna mine was a leading cause of the war and communities have not been offered redress for the damage.

Since 2009, there has been a push to re-open the mine, with proponents claiming that Bougainville needs the mine to be economically independent.

President Momis has been at the forefront of this fight, under the auspices of former operator Bougainville Copper Limited (BCL), claiming that it would be the best and quickest option to generate revenue.

In December 2017, however, the president announced a moratorium of mining at Panguna and revoked BCL’s mining licence, after a meeting of landowner meetings voted against such an extension.