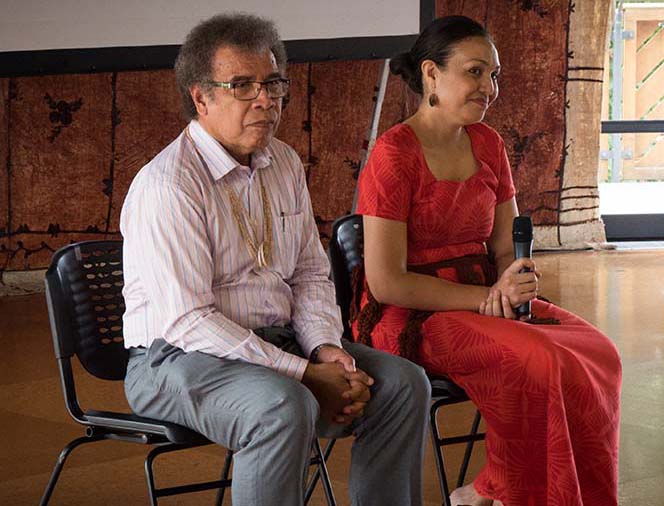 The NZ Institute for Pacific Research will cease to exist in its current form, Emeritus Professor Richard Bedford said in a bombshell announcement to the Oceans and Islands conference today.

Rumours of NZIPR’s demise were doing the rounds after a review of the organisation earlier this year by the Ministry of Foreign Affairs and Trade (MFAT).

“I do want to finish with expressing the gratitude that the institute has for the Ministry of Foreign Affairs and Trade for the investment they have put in to the establishment of a NZ Institute for Pacific Research,” said the acting director in his conference closing address.

“We are in a rather ambiguous situation at the moment and quite a lot of speakers were informed of this in advance. I wrote to alert them to the fact we were in yet another ‘Pacific reset’ around the institute.

“Pacific reset are the words that the ministry has used for the rethinking of aspects of our policy in the Pacific,” said Professor Bedford.

He admitted that he had yet to see the review report which is said to be confidential to the institute’s board. They knew the recommendations that the decision to cease the current arrangement was based on.

“Just for those of you who might be bewildered by this, it’s not about getting rid of the NZ Institute of Pacific Research,” he said.

“But the model and the way it’s worked has not given them the return on investment with regard to research that informs policy.

“I can sympathise a little bit with MFAT here because academic research doesn’t always and should never always fit perfectly some policy objective or goal,” he said in attempting to cushion the blow.

“The drivers of academic research are different from policy orientated research,” he said highlighting the difference in what the ministry had expected from NZIPR.

“It’s about understanding and learning ways of doing things, testing models, testing ideas. It’s not about necessarily just producing something to enable a solution. The research may contribute to a solution long-term but that isn’t what drives it initially.”

MFAT-owned brand
He made it clear that the brand name was owned by MFAT and not the three universities (Auckland, Otago and Auckland University of Technology) that have been involved in the initial conglomerate that formed the NZIPR.

It was envisioned initially that long-term the NZIPR would become something like Australia’s think tank Lowy Institute.

When NZIPR was formed, MFAT invested $5 million for a set number of years, but the arrangement was that the NZIPR would look to possible external sources of funding to top up MFAT’s investment but that never eventuated.

“The NZ Institute for Pacific will continue to exist, operating under a different but as yet unspecified model.

“Whatever actually happens, in my view they’d be mad if they got rid of the opportunity that we’ve had to have this kind of conference,” he said voicing his opinion.

He said the support from MFAT needed to be acknowledged and he aimed to work with the ministry constructively to try and ensure that all the many good things that have emanated from their investment continue in whatever form they chose to implement the institute in the future.

Transition period
“That’s just to clarify that it won’t be the same next year, the current arrangement finishes on March 14,” Professor Bedford said.

“Between now and March 14 Evelyn [Dr Evelyn Marsters – research programme manager] and I, along with others in the University of Auckland, AUT and the University of Otago which are partners in the consortium, will work with MFAT to ensure that the transition from the first generation, the Fresh Off the Boat version of NZIPR moves along to the next generation version under MFAT control.”

Day two of the conference, apart from this sensational announcement, featured keynote speakers Associate Professor Kabini Sanga from Victoria University (Wellington), who spoke about “Pacific research frontiering” and Dr Alisi Holani, Deputy CEO of the Ministry of Commerce, Consumer, Trade, Innovation and Labour (MCCTIL) in Tonga, who spoke about “Bridging the policy-research gap in the Pacific – Insights from labour mobility negotiations in PACER Plus”.

The third keynote speaker, Dr Tapugao Falefou Permanent Secretary Government of Tuvalu, could not attend the conference due to not having his visa processed in time, something which was lamented by Professor Bedford.

‘Quite irreparable damage’: child family violence survivors on how court silenced and retraumatised them