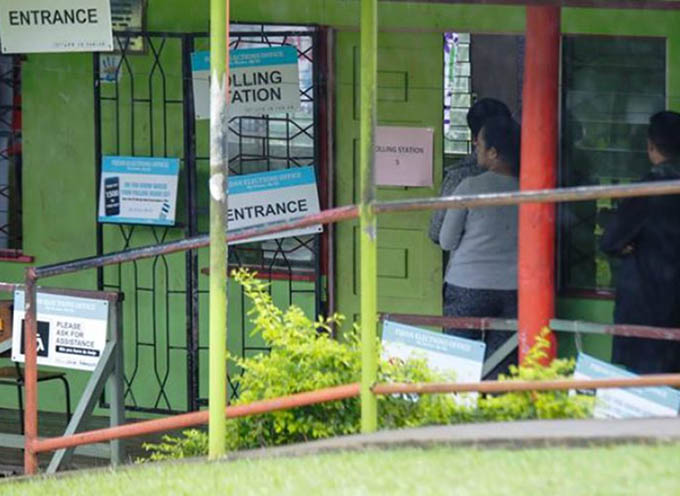 With the final results from 1715 (79 percent) of the 2173 polling stations now counted, who will form the next Fiji government is still too close to call, although the trend since earlier announcements — and the preliminary results announced on Thursday —  indicate a narrow win for FijiFirst.

As of 1pm today, FijiFirst had 49.93 percent of the vote, SODELPA 39.96 percent and National Federation Party (NFP) 7.36 percent. The other parties had a combined total of 2.74 percent, well below the 5 percent threshold to win a seat.

What has been most disappointing is the low voter turnout. The atrocious weather did not help but in itself is an insufficient reason.

There are likely to be a mix of reasons but their relative importance will remain unknown. They could perhaps have chosen not to vote because they are happy with the status quo under FijiFirst.

Or they could have thought the election result would not improve their lives whatever the outcome.

So what can we deduce from the results so far?

The aim of the 2013 constitution in abolishing race-based elections which favoured the chiefly Taukei appears to be a work “still in progress”. SODELPA is essentially a Taukei party with 43 of its 51 candidates Taukei, 4 Indo-Fijians and 4 Others.

NFP, a traditional Indo-Fijian party, had made serious efforts to be more multiracial. Nineteen of its 51 candidates are Taukei, 29 Indo-Fijians and 3 Others.

FijiFirst is the most balanced party with 26 Taukei, 23 Indo-Fijian and 2 Others. It even has two chiefs! But no paramount chiefs.

A Rotuman, Pasepa Lagi, out-polled Bainimarama and all other candidates in Rotuma.

A casual examination of voting by the type and location of polling station shows race and parochial interests to still be very evident.

Village voting
People voting in Taukei villages generally voted SODELPA, no doubt due to the influence of village heads (turaga ni koro). This pattern did not seem to be influenced by whether or not the FijiFirst government had spent money on local development.

So much for the social media and opposition claims that FijiFirst was buying votes. Those in (mainly Indo-Fijian) settlements voted FijiFirst or NFP.

In urban areas, voting also seemed to be greatly influenced by race, and to a lesser extent by economic wellbeing.

Three types of polling stations deserve special mention. Those located in military areas voted overwhelmingly for FijiFirst (which reduces the prospect of another coup); police areas were about equally divided between FijiFirst and SODELPA, and Corrections were predominantly SODELPA.

One further initial observation is the different distribution of candidate preferences.  Bainimarama was the first choice  with 36.8 percent for FijiFirst votes.

SODELPA’s Rabuka only accounted for 17 percent with other candidates scoring higher than with FijiFirst.

But individual SODELPA candidates may have been better known in particular locations.

The geography of how people voted in 2014 and 2018  by polling station would make a very good topic for a master’s thesis. There are certainly enough hypotheses to test.

Retired University of the South Pacific development studies professor Crosbie Walsh is a New Zealand-based academic. His articles are published by Asia Pacific Report with permission.