David Robie, who reported from New Caledonia several times during the 1980s for Islands Business magazine, The Australian, New Zealand Times and other media, returned to the French Pacific possession to observe last weekend’s historic referendum. He was also on board the Rainbow Warrior, the Greenpeace environmental ship that was bombed by French secret agents during the height of “les évènements”. He reflects in the second of two articles.

PART 2: By David Robie in Nouméa

A cartoon published by Nouméa’s daily newspaper, Les Nouvelles Calédoniennes, on the eve of the historic independence referendum in New Caledonia at the weekend caught my eye. Noting that thanks to the referendum, people throughout the world – with the possible exception of at least New Zealand whose media was largely absent – were talking about New Caledonia.

“We’re demanding one referendum a month,” says a travel agent.

A touch cynical perhaps, but this caricatured sentiment contrasts with the anti-independence parties that want to scotch the next two referendums – due in 2020 and 2022 – provided for under the 1998 Nouméa Accord. This agreement was an updated version of the original Matignon Accord that ended the civil unrest of the 1980s and opened the door to long-term stability and progress.

The three anti-independence parties, Les Republicains led by Sonia Backès (New Caledonia’s version of Marine le Pen?), Rassemblement and Caledonie Ensemble, reckon that the people have spoken and there is now no need of further referendums.

They were shocked that the indépendantistes did so well given that they had already written off the “declining” demand for independence and were confidently predicting a crushing 70/30.

In the end, the vote was remarkably close, reflecting the success of the pro-independence Kanak and Socialist National Liberation Front (FLNKS) and its National Union for Independence (UNI) partner in mobilising voters, particularly the youth.

The referendum choice was simple and stark. Voters simply had to respond yes or no to the question: “Do you want New Caledonia to attain full sovereignty and become independent?”

Credible independence vote
The “no” response slipped to a 56.4 percent vote while the “yes” vote wrested a credible 43.6 percent share with a record 80 percent turnout. 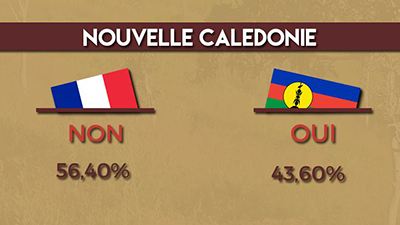 The final vote count … an unexpectedly close result between the “no” and “yes” vote, offering hope for the Kanaks. Image: Caledonia TV

The encouraging yes vote is even more remarkable when it is taken into account the demographic gerrymandering by the French government that ensured the indigenous Kanaks – who have ruled by France for 165 years since New Caledonia was declared a penal colony in 1853   – would remain a minority in their homeland and in this vote.

More than 20,000 convicts were shipped to New Caledonia in the 19th and early 20th centuries, including Muslim rebels fighting against colonisation in Algeria, and dissidents from the 1870 Paris commune. Later migrants included Japanese, Javanese and Tonkinese (North Vietnamese) labourers in the nickel mines. 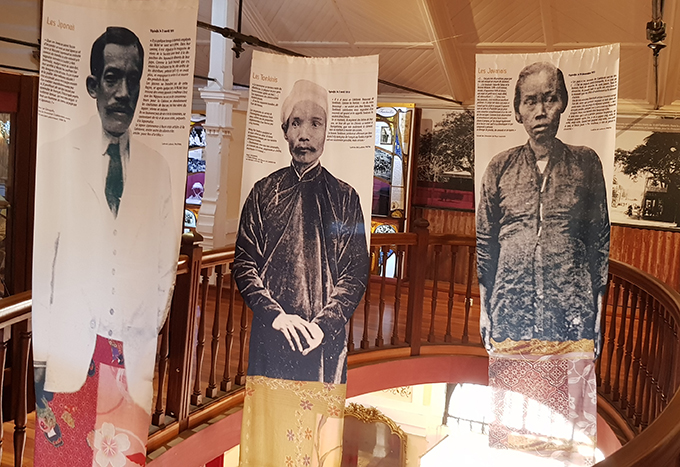 Japanese, Javanese and Tonkinese migrants among the early nickel mine workers and settlers as portrayed in Nouméa’s City Museum. Image: David Robie/PMC

Forty percent of the New Caledonian population are Melanesian Kanaks, 29 percent European, and 9 percent are Polynesians from Wallis and Futuna Islands. The rest are a mixture of Asian and Pacific communities.

Voter restrictions
The referendum voters were restricted under the Noumea accord to those eligible under these criteria: 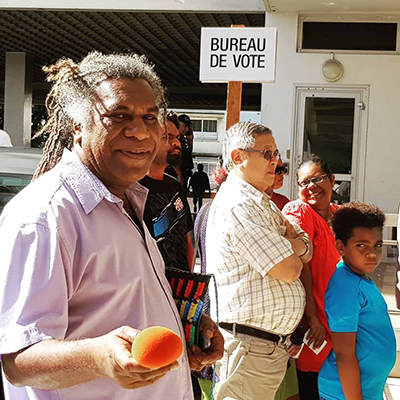 The encouraging mobilisation of youth voters, a significant change since the 2014 provincial elections, and the emergence of a growing cadre of young multi-ethnic voters who are more open to a shared future than some of their conservative parents augurs well for the indépendantistes.

“This referendum was a victory for the youth. The loyalists’ predictions were thwarted, said FLNKS president Roch Wamytan. “This vote was a big leap forward. We will continue on our pathway, we will prepare the people in New Caledonia for independence.

“The struggle isn’t over until we are decolonised. One winner in the vote was fear. Over the past six months, we have tried to allay fears about retirement provisions, security and education. We clearly didn’t do enough. We will work harder on this for the next ballot.”

FLNKS official Alosio Sako said: “We’re a short step from victory, and there are still two more ballots to come.”

Independence inevitable
Some who voted against independence are resigned to the belief that one day New Caledonia will become independent. 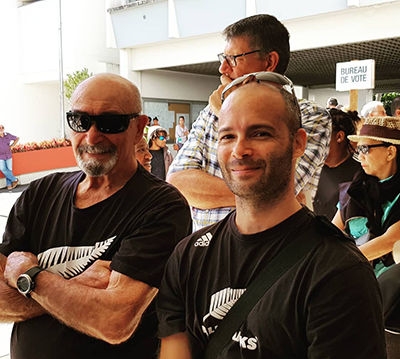 “Silver fern” voters … Spanish-French father and son Arnaud and Manuel Fuentes are opposed to independence but are definitely fans of the All Blacks. Image: David Robie/PMC

Talking to a traveller, Sammy, a Lebanese-born New Caledonian with a French passport, and his Caldoche (settler) wife, who were on my flight back to Auckland and heading to Hanmer Springs for a holiday in “très jolie” New Zealand, gave me some interesting insights.

Ironically, Sammy migrated to New Caledonia after “les évènements” in the 1980s which led to the Matignon Accord in 1988 – to escape the civil war in Lebanon.

“Independence is inevitable,” he says. “I only wish they would get on with it and not have votes, delaying things. Build for the future instead of yet another vote.

“In spite of the vote against independence, it is the way it is going. One day New Caledonia will be independent so it is best to restart our future now. We have a chance to build something really new.”

“The indépendantistes are very determined.”

He seemed to be reflecting the view of Prime Minister Édouard Philippe, who flew to Nouméa from Vietnam for a day to meet political and civic leaders, and was whisked up to the Northern province stronghold “capital”Koné.

Philippe declared that a meeting would be held with the accord “signatories” next month and he hinted at some key policy changes to deal with social conditions and “balancing” the economic cleavage in this nickel rich and tourism booming territory.

Spread in Geo
What made Sammy choose New Caledonia? It was so far away from Lebanon – “it was just like Syria is today” – and he had read an article about New Caledonia in the French magazine Geo.

In fact, Geo has just published a cover story last month about New Caledonia headed “New Caledonia: So near, so far”, a 43-page spread dedicated to the beauty, culture, environment and flora and fauna of this “marvellous” archipelago. It would entice anyone.

The magazine quotes linguist and poet Emmanuel Tjibaou, one of six sons of the Kanak leader Jean-Marie Tjibaou assassinated in 1989 (see Part1), who has been director of the stunning Tjibaou Centre, a cultural memorial to his father, since 2012.

“Being ’Kanak’, or a ‘man’, isn’t a question of skin colour,” he says. “The centre introduces Melanesian culture to Western eyes that are not accustomed to it. Kanak traditions are oral, like elsewhere in Oceania. We live our culture – we discover it through singing, or dancing; we speak, or we weep.” 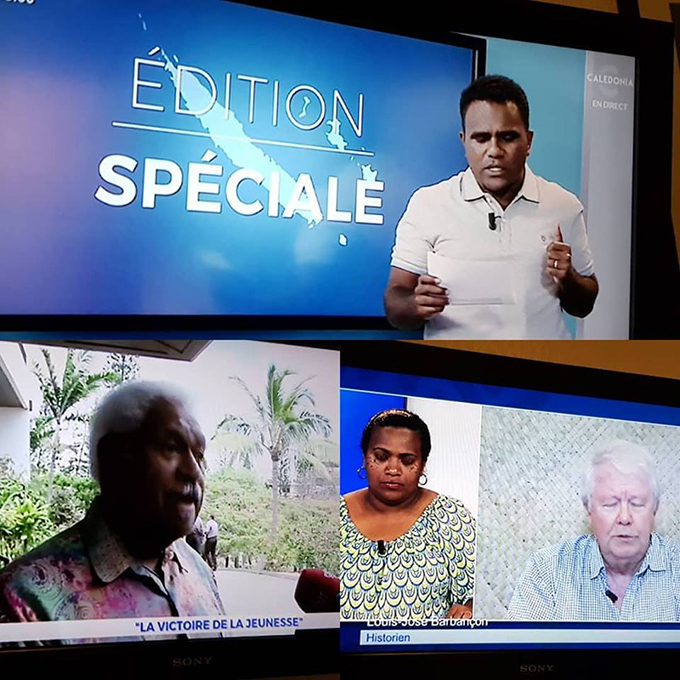 Another example of emerging “new wave” institutions is a small upstart digital television channel based at Koné. Funded largely by the Kanak-governed Northern province, it is a breath of fresh air compared with the dominant Premiere television (part state-run networks with six channels that look to Paris) and Les Nouvelles Calédoniennes, which has been very hostile to independence in the past, but is more subdued these days.

Caledonia TV making mark
Caledonia TV is already making its mark as an independent channel that is “telling our own stories” about Kanak culture, music and traditions and exploring all ethnicities in New Caledonia.

It played an important role in the referendum by setting up TV studios in the University of New Caledonia and providing balanced coverage and ready access for grassroots people to an engage in a dialogue about their future. 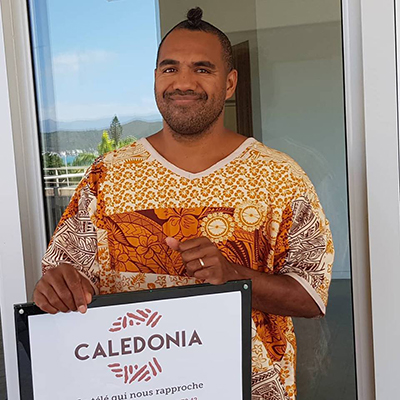 I caught up with one of the journalists involved in referendum coverage in the campus studios, Duke Menango, who did some of his early training as a journalist at Aoraki Polytechnic journalism school in Dunedin on a New Zealand aid scholarship.

“Caledonia TV started off as a web-based channel in 2012 and then became a fully fledged TV station the following year,” he said.

“It was important to give people a choice. Previously television was dominated by the state media monopoly with only one direction and one point of view. I don’t think we were being well represented as Kanaks and as Kanak reporters.

“With us, we are going out to the people – the grassroots, and we are giving them a voice. A voice for the different tribes. And it isn’t just the tribes, we are telling the stories of all ethnicities.

“We’re giving everybody a voice.”

Stiff challenge
But Caledonia faces a stiff challenge from the “mainstream” media, which is largely not sympathetic to independence.

On the weekend of the referendum, Les Nouvelles Calédoniennes devoted a full page for an editorial denouncing independence.

“France or the unknown?” warned editor-in-chief Olivier Poisson, who derided the FLNKS, claiming that it was presenting an unclear, even “confusing” platform, with contradictory objectives.

“In contrast, it’s a fact that we know New Caledonia is already independent. For sure, it isn’t a question of full sovereignty, but whether the country already decides its economic orientation, imposes its own taxes, leads education, runs health, and is able to enter into international accords and partnerships.”

Finally, his message was: “It’s too risky to take on powers that are too great for so little to gain.”

His message irked many indépendantistes, and drew criticism that the newspaper was illegally breaching the political blackout prior to the referendum

“What kind of bullshit is that again?” asked Magalie Tingal Lémé, a former news editor of the pro-independence Radio Djiido. “The editor-in-chief is not supposed to make any comments since the official campaign is over since last night. Some journalists should start being real journalists in this country.”