In this context, the extensive forests of Papua and West Papua provinces in Indonesia are now becoming the focus of international conservation efforts. There are many inherent perils to this new boom in conservation in the provinces, which could repeat past mistakes that have deprived and dispossessed indigenous Papuans from their lands.

Here we briefly outline the challenges of conservation, development and the recognition of indigenous land rights in West Papua province*, based on our ongoing collaborative applied research projects in the province that began in 2013.

West Papua Province, located in the Bird’s Head region of Papua (New Guinea) with a total area of 9.7 million hectares, retains more than 90 percent of its forest cover (Figure 1).

West Papua Province was created in 2003 by splitting the province previously known as Papua into two provinces. As one of the youngest provinces in Indonesia, West Papua is under pressure to accelerate socio-economic development.

The poverty rate in West Papua is high, although declining. In 2016, one fourth of West Papuans (225,800 people) lived under the regional poverty line, defined as 475 thousand Indonesian rupiah (about US$31) per month (Badan Pusat Statistik, 2017).

The rural areas of West Papua, which are mostly populated by indigenous Papuans, are poorer than urban areas.

Extensive forests
Although lagging behind in its socio-economic development, West Papua is one of few provinces with extensive native forests.

The total forest cover in West Papua is approximately 90 percent of the total area, for a total of 8.9 million hectares. This figure includes all forest cover within both state forests and non-forest areas. 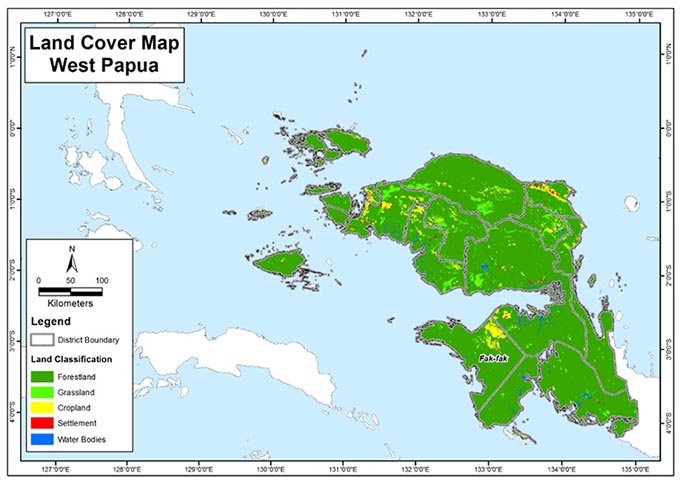 Figure 1: Land cover in West Papua province in 2016, based on data from the Ministry of Environment and Forestry. Map: Mongabay

The provincial government declared in 2015 that it would become a Conservation Province, and the supporting provincial regulation for the conservation province, now retitled as a “Sustainable Development Province”, has been drafted (Note 1).

There are many inherent dangers to the designation of West Papua as a conservation province. The province is rich in its natural environment but also has one of Indonesia’s highest rates of poverty.

By zoning areas as part of the forest estate, they fall under the jurisdiction of the Ministry of Environment and Forestry, with conservation areas managed by the central government. There are several types of conservation areas under Indonesian law, including national parks, wildlife sanctuaries and hunting parks.

People displaced
Within the core areas of national parks and also the entire area of wildlife sanctuaries, no land uses are permitted. The establishment of conservation areas in Indonesia has historically led to the significant displacement of indigenous peoples from the core areas, restricting their access to both land and livelihoods.

The provincial government of West Papua, with the support of the Papuan People’s Council (Majelis Rakyat Papua) and civil society organisations (Note 2), have developed a draft provincial regulation on the recognition of customary land rights.

The regulation builds on the momentum of the Indonesian constitutional court decision in 2012, 35/PUU-X/2012, which recognised the rights of indigenous groups to lands within the Indonesian forest estate.

At present, there is uncertainty about how the sustainable development and customary land rights draft regulations would affect one other, once implemented.

Finally, in parallel to these initiatives, the administration of President Joko Widodo, which came into office in 2015, has been focusing on reducing poverty in regional areas of Indonesia, with a particular focus on the Indonesian portion of the island of New Guinea.

The main element of his policy has been to increase spending on infrastructure development as well as driving agricultural development. Previously remote and inaccessible areas of Papua are now finally getting access to roads and electricity, increasing their access to markets and other opportunities.

Can these three policy initiatives — for conservation, development and the recognition of indigenous land rights — be balanced in a way that benefits both indigenous Papuans and the environment?

Balanced solution
From our research in West Papua, undertaken through various initiatives since 2013, we highlight several challenges to finding a balanced solution:

These challenges are all evident in the district of Fakfak, located in the central-western part of the province (Figure 1).

Fakfak District faces the Maluku Islands and historically, has long been integrated into the spice trade, especially for its local variety of nutmeg. Nutmeg and mace have been historically used worldwide for culinary purposes and can be processed further to produce essential oil and oleoresin.

Although Indonesia has been the center of nutmeg production for over a thousand years, the full potential of the nutmeg market remains untapped. One of the main undervalued nutmeg varieties is Papuan nutmeg (Myristica argentea Warb) or locally known as Pala Tomandin.

Papuan nutmeg is commercially grown in Fakfak and Kaimana districts in West Papua, with most of the production concentrated in Fakfak district. Nutmeg is cultivated in wild and semi-wild forests by indigenous farmers, in lands owned and managed under customary laws.

Diversified livelihoods
Despite being registered as a geographical indication in 2014 as Pala Tomandin, the demand and price for Papuan nutmeg remains low. Consequently, nutmeg farmers often have diversified livelihoods such as fishing and seaweed cultivation or farming other crops.

Deforestation has remained relatively limited in Fakfak District, although the period of 2010 to 2016 saw a spike in clearing related to forestry concessions and the allocation of an oil palm concession, according to data from the Ministry of Environment and Forestry (Figure 2). 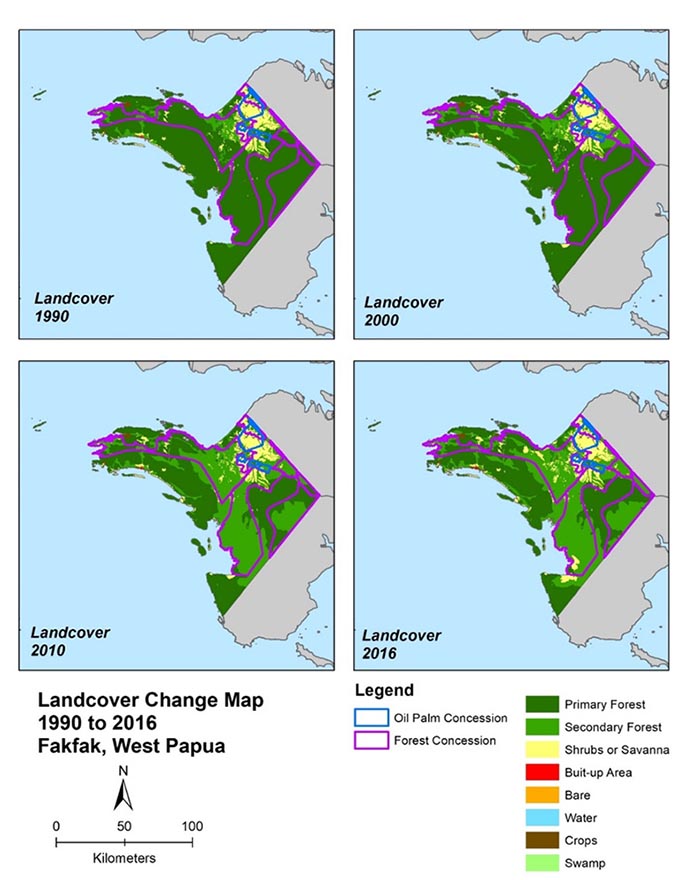 Concessions, where logging companies not owned by local communities extract timber, remain the main driver of deforestation, which is a trend that has been increasing. Forest degradation, which is the conversion of primary forests to secondary forest, has primarily been driven by forestry concessions and spiked dramatically during the period of 2000 to 2010.

The rate of forest degradation declined significantly after this period, with the majority of degradation now occurring outside of forestry concessions. Currently, indigenous land owners receive compensation payments for timber harvested by the concessionaires, although the amount and distribution of benefits may vary.

From our case studies in Fakfak District, local people have described localised processes of demographic expansion and increasing financial pressures, such as the costs of paying for secondary and tertiary education for their children, as the causes of this expansion into primary forest areas.

Social taboos
There are social taboos, however, in delineating these boundaries as historically boundaries between different tribes and clans were established through wars and conflict. Without proper and legitimate mediation processes in place, mapping customary boundaries has the potential to reignite these conflicts.

In the absence of conflict mediation mechanisms and institutions, there are other methods available for delineating indigenous land ownership. INOBU, together with AKAPE, a Fakfak based NGO, has trialed mapping lands based on land use instead of ownership rights, particularly focused on nutmeg forest gardens in Fakfak district.

Thus far, we have mapped 263 farmers with a total area of 792 hectares in 20 villages. These maps provide indicative maps of customary use of forest areas, which will later serve as the basis for discussion on ownership rights between clans and tribes, and with the government.

Recognising the land rights will not be sufficient to solve the problem of deforestation and forest degradation, although it will help. Improving the value and markets for locally important forest commodities is crucial.

In Fakfak, we have been working on improving the markets and value of Papuan nutmeg while strengthening alternative livelihoods in order to alleviate the economic pressures on indigenous Papuan households.

We have been engaging with nutmeg exporters to ensure that the product meets the standards required by international markets. We have also been working with an Indonesian cosmetics company to help develop local industries for processed nutmeg products.

All these interventions, in turn, should be counterbalanced by strengthening customary institutions for sustainably managing forest resources. Finally, a district level, multi-stakeholder platform will guide the sustainable production of nutmeg in Fakfak district.

Broader application
The lessons from Fakfak district can be applied more broadly to the province of West Papua. We propose that the recognition of the land and resource rights of indigenous Papuans should be the immediate priority of the provincial government, donors and conservation and development organisations.

Conservation should be viewed through the prism of strengthening customary systems and institutions, including village (kampung) administrations, for managing the environment rather than the expansion of protected areas.

The recognition of indigenous land and resource rights should not, however, extinguish their rights to develop in accordance with their own aspirations. Rather, indigenous groups should be supported through interventions that help them to develop profitable and sustainable industries, as well as support for accessing health and education.

An essential part of this should be developing economic alternatives for indigenous people that increase the value of standing, well-managed forests. Strict conservation, where necessary, should be supported through adequate financial and other incentives, with the benefits distributed equitably.

Prior to establishing or expanding conservation areas, governments should also assess the potential effects on indigenous peoples, including how it will contribute to, or impede, poverty reduction targets and the likelihood of future conflicts.

The Jokowi administration’s proposed investments in roads and electrification could help improve the economic viability of new community-based enterprises in West Papua if designed and implemented with the participation of local stakeholders, especially indigenous communities.

The goals of both social justice and conservation are best served by recognition of land rights plus the development of economic alternatives for forest communities that enhance their livelihoods by increasing the value of their forests.

First and foremost, West Papuan’s indigenous peoples need to have a prominent seat at the table as the future of the province is planned.

*West Papua generally refers to all of the western half of Papua New Guinea island administered by Indonesia. West Papua, as referred to in this article, also applies to the smaller western province of the island as opposed to the larger Papua province.  This article article is republished from Mongabay – “News and inspiration from nature’s frontline”. Bernadinus Steni is secretary of the Institut Inovasi Bumi and Daniel Nepstad is the executive director of Earth Innovation Institute.

2. Inovasi Bumi (INOBU) and Earth Innovation Institute, supported by the Norad-financed Forest, Farms and Finance Initiative, supported the drafting and initial consultations for the draft special autonomy regulation on the recognition of indigenous peoples (Ranperdasus Pengakuan Masyarakat Hukum Adat Papua di Provinsi Papua Barat). The regulation is the first step towards recognizing the land rights of indigenous peoples, as the existence of customary groups must be acknowledged first.

Humans are polluting the environment with antibiotic-resistant bacteria, and I’m finding them everywhere

We asked over 2,000 Australian parents how they fared in lockdown. Here’s what they said

Ethical fashion is confusing — even shoppers with good intentions get overwhelmed

Humans are polluting the environment with antibiotic-resistant bacteria, and I’m finding...

We asked over 2,000 Australian parents how they fared in lockdown....

Ethical fashion is confusing — even shoppers with good intentions get...

Thailand at a critical juncture with pro-democracy protesters again set to...