Support was widespread for journalist Barbara Dreaver’s detention at the Pacific Islands Forum in Nauru earlier this month. But, reports Maxine Jacobs for Asia Pacific Journalism, some commentators argue journalists should abide by their host nation’s reporting regulations and the Nauru refugee crisis is not as important to Pacific nations as it is to New Zealand and Australia.

While controversy dogged Nauru’s detention of TVNZ Pacific correspondent Barbara Dreaver during the Pacific Islands Forum earlier this month, some critics question how the reporting “overshadowed” climate change and other critical Pacific issues.

New Zealand journalists have expressed their outrage against the holding of Dreaver during the summit, but Massey University’s Pasifika director Associate Professor Malakai Koloamatangi says reporting of important issues discussed at the forum was sidelined by attention focused on media freedom.

“Because of what happened to Barbara Dreaver, and the lack of access to refugees, it was kind of a distraction and it detracted from maybe covering the main business at the forum,” he says.

Dr Koloamatangi says issues such as climate change, regional security, immigration and trade are significant concerns for the Pacific and the forum.

However, these issues had been “outmatched by the spotlight” on Dreaver and Nauru’s refugee camps.

“The refugee issue is probably not as important in the Pacific as it is in New Zealand and Australia, that’s really the reality of the situation.

People here and Australia have a lot of time to be concerned about the refugees in Nauru and Papua New Guinea, but unfortunately for Pacific Islanders themselves there are other pressing issues like poverty and domestic violence, third world diseases and so on that they are probably more concerned about.” 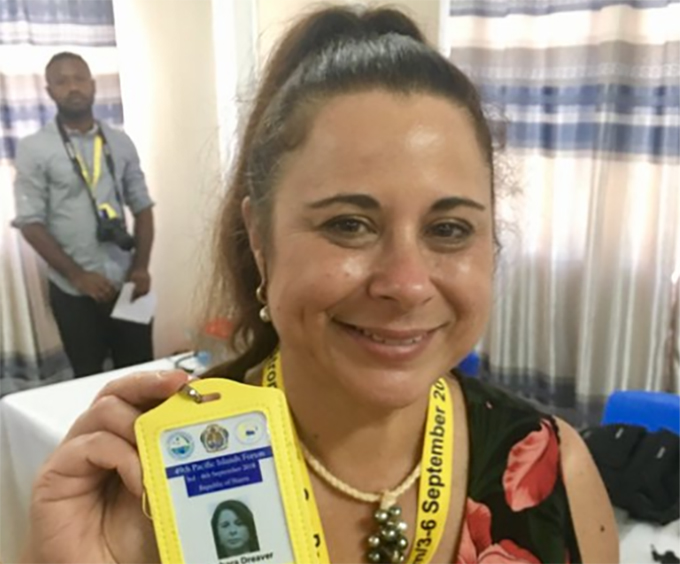 He says he does not condone limiting press freedom, but it is a sensitive and complicated issue which needs to be looked at from many points of view.

“All journalists need to be respectful of the laws and regulations of the countries where they work…but on the other hand you have people who have decided that this is the way they’re going to work, regardless of the fact that they will be punished by the law.

“Some of them have been to prison, so it’s a choice.

“Obviously when Barbara decided not to follow the directions given by the Nauruan government she was obviously taking a risk, and with risk come possibilities of penalties and punishment…but it’s what makes her the quality journalist that she is.”

Nauru issued a statement explaining Dreaver’s detention by police, saying her accreditation and access for the Pacific Islands Forum had been revoked due to a breach in visa terms, but was reinstated the next day.

Dreaver said the interview she held with a refugee was outside a restaurant, not inside a camp.

Detained three hours
However during the interview she said she was questioned by police and held at a police station for three hours for breaching her visa.

“I was under the impression, and I know, we were allowed to talk to refugees. I think it probably shows that things are a wee but sensitive here. In fact, a lot sensitive.”

“We have only asked for co-operation from the media in order to preserve public safety, and this is not unreasonable.”

Nauru President Baron Waqa said media attending the forum were not interested issues in the Pacific – only issues for their own nations and they should have had a stronger focus on the forum.

“How many leaders here? But we’re having to deal with these other issues which do not even touch on the concerns of the Pacific and the rest of the leaders. It disappoints us,” he said.

“Don’t tell me about refugees being an issue. How can it be an issue for Tonga, for Kiribati? No, it’s an issue for Australia and for all those refugee advocates out there.”

‘Selling news’
President Waqa said journalists were invited and came to Nauru to report on the forum but chose to report on other issues on the island.

He said the “media are impressing your will on us” and “sell our news”.

However, Radio New Zealand journalist Gia Garrick, who reported on the forum, rejected the President’s statement.

“Sell the stories? For money? Well, being part of [public broadcaster] RNZ I would completely refute that.

“It’s kind of a double standard from the President because on the first day he invited journalists to go and talk to refugees in the community, saying things along the lines of the refugees here live harmoniously, they live in the community, we’re not going to stop access to them, we invite you to talk to them and you’re more than welcome.”

A journalist who attended the forum provided Pacific Media Centre with the guidelines issued to journalists covering the event which states:

“You are only authorised to report on, or take photos or videos of, the PIF (Pacific Islands Forum). Any other subjects must be approved by the RON (Republic of Nauru).”

Mixed messages
Garrick said journalists were sent mixed messages from the get go because guidelines were vague and as the refugee situation was raised at the forum it was not clear what the restrictions were.

“There was no way a set of very vague visa guidelines and a direction from the media person was going to stop us from reporting the story.

“We still covered the forum as we would previous years, but there was also the matter of the refugees, the 900 refugees that they were keeping in detention centres on the island.”

New Zealand’s Ministry of Foreign Affairs (MFAT) supported Dreaver after her detention by Nauru police, stating in a release that her detention was unacceptable.

MFAT spokesperson Todd McClay said: “Freedom of the press is a fundamental part of any democracy and journalists must be free to tell important stories.”

Union E Tū, stood by the TVNZ Pacific correspondent, welcoming the support shown by MFAT, while challenging Australia for its alleged role in her detention.

“This is a story of huge public interest to audiences across the world and Barbara did not shy away from tackling it, even though it has always been clear authorities in both Nauru and Australia are not keen on a light being shone on the issue, E Tū said.

“While Barbara was detained by Nauru police, Australia too must take some responsibility for this attack on press freedom.”