Protesters mark the 46th anniversary of the declaration of martial law under Philippines dictator Marcos with demonstrations against President Duterte. Video: Rappler

By Paterno Esmaquel II in Manila

Protesters have staged the most widespread barrage of protests yesterday against President Rodrigo Duterte, as Filipinos marked the 46th anniversary of the declaration of martial law under dictator Ferdinand Marcos.

A running list by Rappler shows rallies scheduled across 14 regions in the Philippines, including Metro Manila, and even overseas.

The protests come in the face of growing discontent under Duterte – prices of goods have been rising, thousands have died in a drug war that has failed to eradicate drugs, and critical voices such as Senator Antonio Trillanes IV and Australian nun Sister Patricia Fox face threats of either arrest or deportation.

Duterte – who earlier said the dictator’s daughter, Ilocos Norte Governor Imee Marcos, donated to his presidential campaign – wants the dictator’s son and namesake, former senator Ferdinand Marcos Jr, to be vice-president so that Marcos can succeed him.

Marcos has a pending protest against the election victory of Vice-President Leni Robredo, leader of the opposition.

‘No abuses’ claim
Marcos is selling the idea that no abuses happened under his father’s regime.

Protesters yesterday refused to take this sitting down. 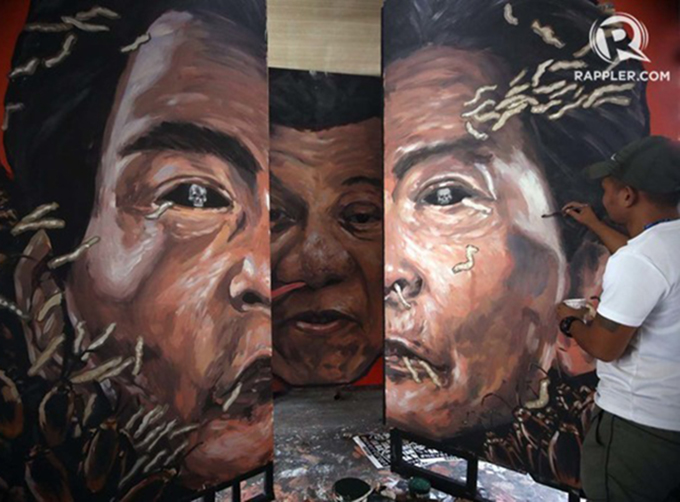 The Catholic Church, which was instrumental in toppling Marcos in 1986, is one of the groups that helped mount the September 21 rallies.

A Mass for Dignity and Peace was held at San Agustin Church in Intramuros, Manila, yesterday afternoon, followed by a march to Luneta with other religious denominations.

Those who marched to Luneta included people of different political colours, from priests and nuns to leftist groups to Duterte critics such as former chief justice Maria Lourdes Sereno.

Different though they were, protesters had a similar cry: Resist a creeping dictatorship.

Sereno was one of the loudest voices in Luneta on Friday.

(We suffered during martial law. That’s why we’re fighting for and upholding justice and righteousness to avoid a repeat of that. My fellow citizens, especially children, will we permit martial law to happen again?)

Sereno – who for years kept the “dignified silence” of the Supreme Court until Duterte had her ousted – found herself leading a chant before a crowd on Friday: “Never again to Martial Law!”

Below the stage where speakers like Sereno spoke, a tired Judy Taguiwalo, who marched from Mendiola to Luneta, was seated on a monobloc chair as she granted an interview.

Taguiwalo was an activist whom Duterte named social welfare secretary, only to be rejected by the Commission on Appointments in August 2017.

“Nakulong ako sa panahon ng batas militar. Maraming namatay, na-torture,” she recalled. (I was imprisoned during the the period of military rule. Many people died and were tortured.)

Paterno Esmaquel II is a journalist with the online news website Rappler and these multimedia reports are drawn from the Rappler coverage.