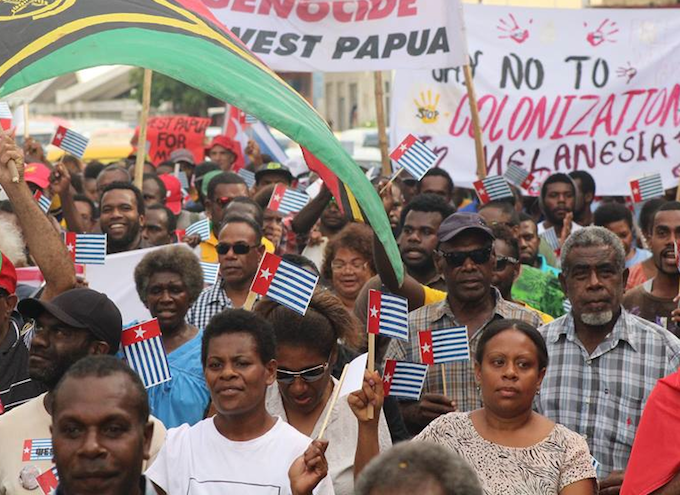 By the Vanuatu Independent

He thanked Foreign Minister Ralph Regenvanu for the appointment “at this pivotal moment in our struggle”.

The appointment comes at a critical time when the Melanesian Spearhead Group and Pacific governments are divided over the West Papuan self-determination and independence issues. Laura Lini previously worked in the MSG secretariat in Port Vila.

“Melanesian sovereignty runs deep in the veins of all ni-Vanuatu, and especially in Laura’s family,” said Rumbiak.

“In the 1970s, both West Papua and Vanuatu were struggling for their independence.

“Vanuatu got there first and it was Laura’s father, as Prime Minister, who pledged not to abandon West Papua or the Kanaks of New Caledonia.

‘Promised solidarity’
“He acknowledged our kinship and he promised solidarity with our struggle. Now, with this appointment of his daughter to our cause, we are reaping the harvest of his sagacity.

Rumbiak accused Indonesia of causing “much suffering in Vanuatu” by trying to undermine this loyalty.

“We know that the [Indonesian] government has used millions of dollars, money so badly needed by its own impoverished citizens, to disrupt your political institutions, to tear families apart, to wreck the lives of good and capable people,” he said.

“But we know that your ancestors are from our homeland and that your chiefs would never abandon us; and that our faith and your faith in God’s preference for justice, peace, and love will, ultimately, prevail.

“There is now just one more river to cross before West Papua rejoins the international community of nations, and that is to be listed on the UN decolonisation agenda.

“Laura’s life will be busy and stressful, maybe, sometimes, overwhelming. But with her passion and dedication lending strength to the determination of all West Papuans to be free, we will succeed in getting the job done.

“Then we will return her to her family and her country with the gratitude of a proud and independent nation,” Rumbiak added.

The Vanuatu Independent is a weekly newspaper with an online edition.