By David Robie in Paris

However, Zeman’s sick joke angered the media when he brandished a dummy Kalashnikov AK47 with the words “for journalists” carved into the wood stock at the October press   conference in Prague and with a bottle of alcohol attached instead of an ammunition clip. 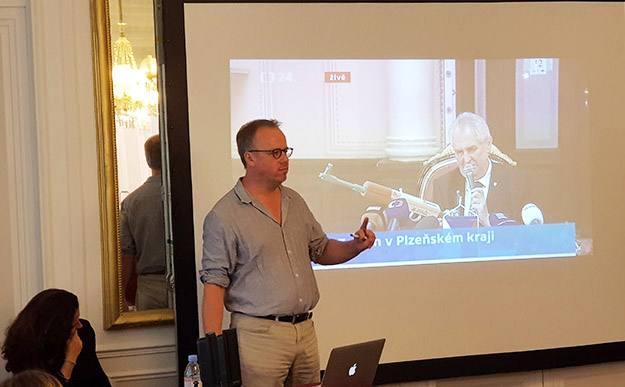 Zeman has never been cosy with journalists but this gun stunt and a recent threat about “liquidating” journalists (another joke?) rank him alongside US President Donald Trump and the Philippines leader, Rodrigo Duterte, for their alleged hate speech against the media.

Deloire cited the Zeman incident to highlight global and Asia-Pacific political threats against the media. He pointed out that the threat came just a week after leading Maltese investigative journalist – widely dubbed as the “one-woman Wikileaks” – was killed in a car bomb blast.

Daphne Caruana Galizia was assassinated outside her home in Bidnija on 16 October 2017 after exposing Maltese links in the Panama Papers and her relentless corruption inquiries implicated her country’s prime minister and other key politicians.

Although arrests have been made and three men face trial for her killing, RSF recently published a statement calling for “full justice’ – including prosecution of those behind the murder. 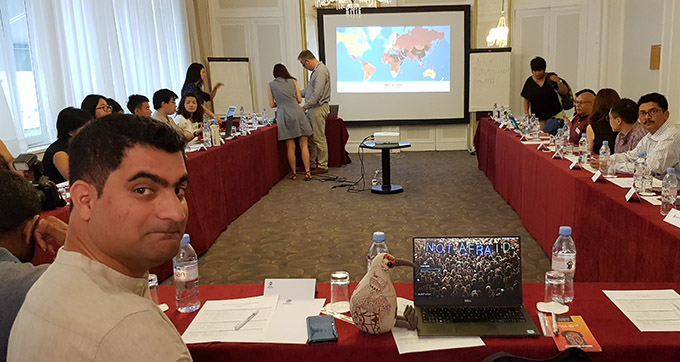 Asia-Pacific correspondents gather for the opening session of the RSF consultation in Paris. Image: David Robie/PMC

Harshly critical
While noting the positive response by UN Secretary-General António Guterres to the journalists’ safety initiative by RSF and other media freedom bodies, Deloire was harshly critical of many political leaders, including Philippines President Duterte, over their attitude towards crimes with impunity against journalists. 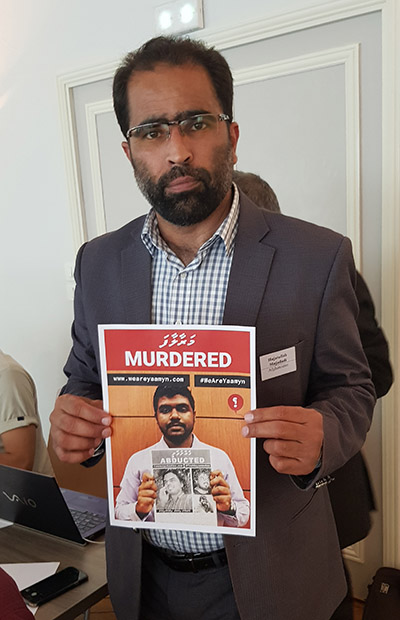 In the Philippines, for example, there is still no justice for the 32 journalists brutally slain – along with 26 other victims – on 23 November 2009 by a local warlord’s militia in to so-called Ampatuan massacre, an unsuccessful bid to retain political power for their boss in national elections due the following year.

Rappler published a report last year updating the painfully slow progress in the investigations and concluded that “eight years and three presidential administrations later, no convictions have been made”.

Ironically, Rappler itself – hated by President Dutertre – has also been the subject of an RSF campaign in an effort to block the administration’s cynical and ruthless attempt to close down the most dynamic and successful online publication in the Philippines (133rd in the RSF World Media Freedom Index – a drop of six places).

Founded by ex-CNN investigative journalist Maria Ressa, Rappler has continued to challenge the government, described by RSF last year as the “most dangerous” country for journalists in Asia.

Duterte’s continuous attacks against the media were primarily responsible for the downward trend for the Philippines in the latest RSF Index, with RSF saying: “The dynamism of the media has also been checked by athe emergence of a leader who wants to show he is all powerful.”

The media watchdog also stressed that the Duterte administration had “developed several methods for pressuring and silencing journalists who criticise his notorious war on drugs”.

Test case
The revocation of Rappler’s licence by the Securities and Exchange Commission (SEC) is regarded as a test case for media freedom in the Philippines. 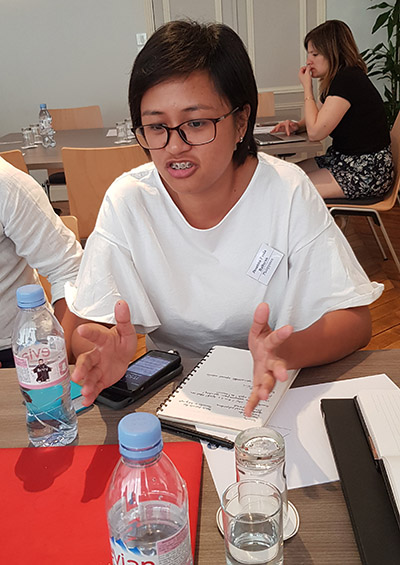 National Union of Journalists of the Philippines advocate Jhoanna Ballaran says the situation is very worrying.

The RSF consultation with some of its Asia-Pacific researchers and advocates in the field has followed a similar successful one in South America. It is believed that this is the first time the watchdog has hosted such an Asia Pacific-wide event.

Asia Pacific director Daniel Bastard says the consultation is part of a new strategy making better use of the correspondents’ network to make the impact of the advocacy work faster and even more effective than in the past.

The Pacific delegation – Associate Professor Joseph Fernandez, a journalist and media law academic who is head oif journalism at Curtin University of Australia (19th on the RSF Index), AUT Pacific Media Centre director Professor David Robie of New Zealand (8th) and former PNG Post-Courier chief executive and media consultant Bob Howarth of Papua New Guinea (53rd) – made lively interventions even though most media freedom issues “pale into insignificance” compared with many countries in the region where journalists are regularly killed or persecuted.

Nauru’s controversial ban on the ABC from covering the Pacific Islands Forum (PIF) this September was soundly condemned and the draconian 2010 Media Industry Development Decree in Fiji (57th) and efforts by Pacific governments to introduce the repressive “China model” to curb the independence of Facebook and other social media were also strongly criticised. (Nauru is unranked and China is 176th, four places above the worst country – North Korea at 180th). 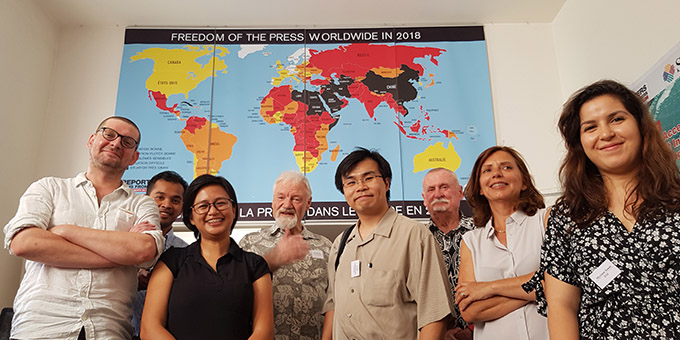 Media highlights
Highlights of the three-day consultation included a visit to the multimedia Agence France-Presse, one of the world’s “big two” news agencies, and workshops on online security and sources protection and gender issues. 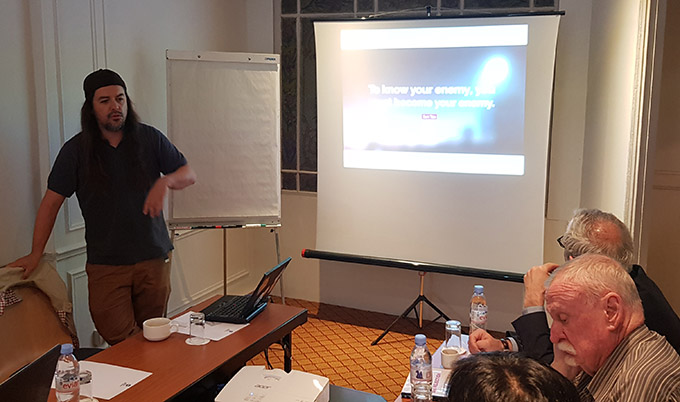 A workshop on online media security and “how to block hackers” by Nico Diaz of The Magma cited Chinese general and strategist Sun Tzu’s quote: “To know your enemy, you must become your enemy.” Image: David Robie

No sooner had the consultation ended when RSF was on the ball with another protest over two detained local journalists in Myanmar working for Reuters news agency.

An RSF statement condemned Monday’s decision by a Yangon judge to go ahead with the trial of the journalists on a trumped up charge of possessing secrets and again demanded their immediate release.

Wa Lone, 32, and Kyaw Soe Oo, 28, have already been detained for more than 200 days with months of preliminary hearings.

They now face a possible 14-year prison sentence for investigating an army massacre of Rohingya civilians in Inn Din, a village near the Bangladeshi border in Rakhine state, in September 2017.

RSF secretary-general Deloire says: “The refusal to dismiss the case against the journalists Wa Lone and Kyaw Soe Oo is indicative of a judicial system that follows orders and a failed transition to democracy in Myanmar.”

The chances of seeing an independent press emerge in Myanmar have now “declined significantly”.