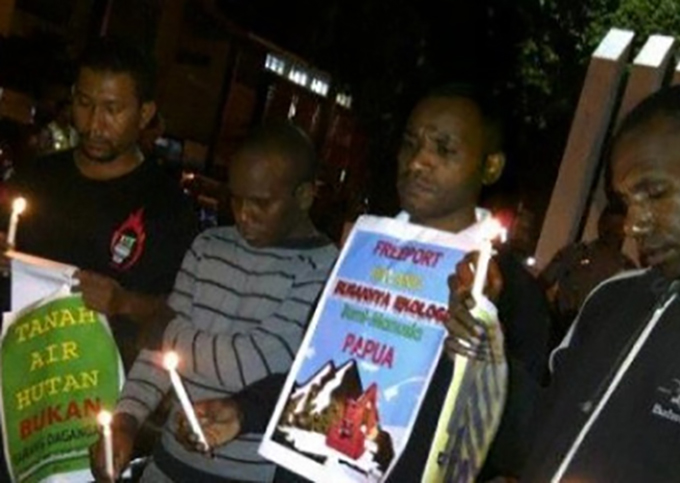 Dozens of youth and students hold a candlelit protest in front of the Diponegoro University campus, Semarang, in 2013 over the human rights abuses that occurred in Wasior and Wamena in 2001. Image: PY/WPAN

By Karina M. Tehusijarana in Jakarta

The incident, which took place on June 13, 2001, was triggered when five members of the National Police’s Mobile Brigade (Brimob) and one civilian were killed after a dispute between residents and timber company PT Vatika Papuana Perkasa.

During a search for the perpetrators, Brimob members allegedly committed gross human rights violations in the form of murder, torture and abduction.

A National Commission on Human Rights (Komnas HAM) investigation into the incident found that at least four people were killed, 39 wounded from torture, five abducted and one sexually abused.

The case was submitted to the Attorney-General’s Office for prosecution in 2004 but has seen little progress since then.

During his campaign for president in 2014, Jokowi had promised to resolve past human rights violations, including the Wasior incident.

“Instead of fulfilling that promise, Attorney-General H.M. Prasetyo said on June 1 this year that gross human rights abuses were difficult to resolve through judicial processes,” Yati said.