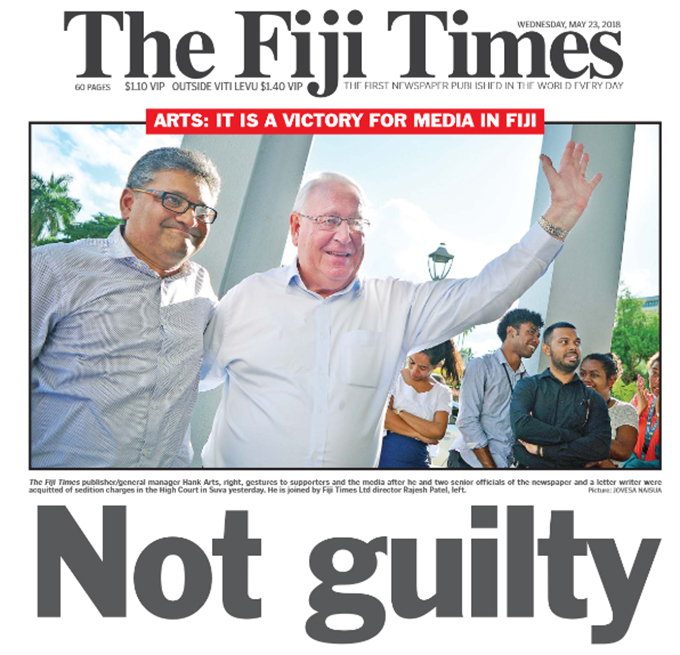 Fiji Times publisher Hank Arts waves to supporters and the media after he and two senior officials of the newspaper and a letter writer were acquitted of sedition charges in the Suva High Court yesterday. With him is a Fiji Times director, Rajesh Patel (left). Image: Jovesa Naisua/Fji Times

Speaking to Wansolwara News immediately after the verdict, Arts said they were happy with the judgment and relieved the case was over.

“We have always said we are not anti-government and our success today is a reinforcement and confirmation that we are a good newspaper. Our staff are incredible,” he said. 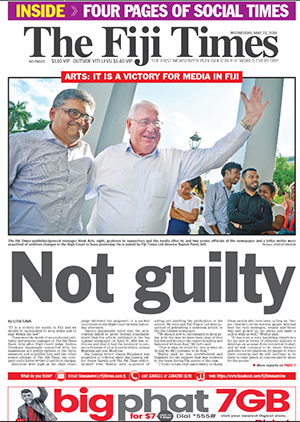 “Relief is the first comment I would make. We are so relieved and happy, but at the same time wonder how we had to go through all this—the human cost (of the case) is too high.”

When asked what the next step was for him considering that fact that he had missed his daughter’s wedding and his own anniversary as a result of the court case, Arts said light-heartedly: “I need a beer now.”

On a more serious note, Arts said The Fiji Times would focus on its strengths moving forward as this year was election year and next year would mark the company’s 150th anniversary.

According to Justice Rajasinghe, the prosecution failed to prove beyond reasonable doubt that the article in question was seditious.

In his judgment, Justice Rajasinghe said he did not find any reason to disagree with the unanimous not guilty opinion of the three assessors.

Justice Rajasinghe found the intention of Waqabaca’s article was to have national reconciliation and he said he did not find any evidence that Arts or Wesley saw the article or knew about it before it was printed.

Wansolwara News is the online publication of the University of the South Pacific journalism programme and a partner of the Pacific Media Centre’s Asia Pacific Report.