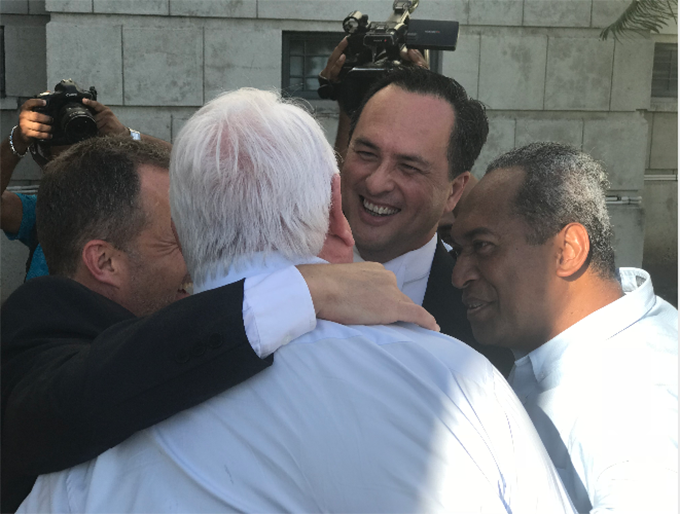 Not guilty … a Fiji Times celebration huddle outside the High Court in Suva today. Fiji Times editor-in-chief Fred Wesley is on the right. Image: The Fiji Times

The High Court in Suva has found the Fiji Times Ltd, its three senior executives and a letter writer not guilty of sedition, reports Timoci Vula in The Fiji Times.

Vijay Narayan and Semi Turaga of Fijivillage report Justice Rajasinghe had ruled that the prosecution had failed to prove beyond reasonable doubt that the Nai Lalakai article was seditious.

The judge said he found the intention of Waqabaca’s article was to have national reconciliation.

Justice Rajasinghe said he did not find any evidence that Hank Arts saw the article or knew about it before it was printed.

The judge also said he did not find any evidence that Fred Wesley read or was aware of the article before it was printed, Fijivillage reports.

Justice Rajasinghe said he did not find any reason to disagree with the three assessors, reported Fijivillage.

All four had pleaded not guilty.