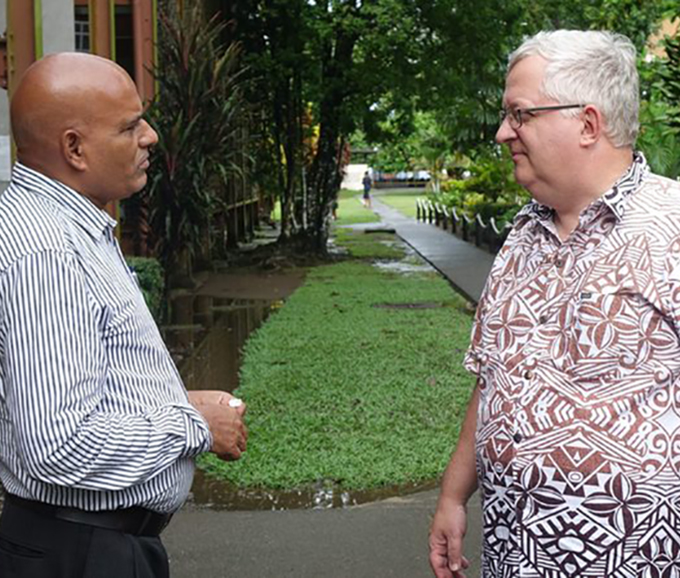 The former vice-chancellor of Papua New Guinea’s Unitech will seek leave from the National Court to retrieve his original PhD certificate from Italy, reports RNZ Pacific.

Albert Schram was arrested earlier this month and charged with obtaining employment through false pretence.

Police allege he produced a fake PhD certificate at Unitech in 2012.

Dr Schram’s lawyer, Greg Manda, said his client had presented a certified copy but had lost his original certificate. He could only obtain another in person from the European University Institute in Florence.

On Friday, Loop PNG reported that Dr Albert Schram, former Vice Chancellor of PNG Unitech, had been arrested earlier in the week in Port Moresby and charged with “false pretence”.

According to the news website, Dr Schram was “arrested over allegations he produced falsified and fraudulent documents relating to his PhD qualification, which he obtained on 24 November 1994 from the European University Institute”.

He has been released from jail on bail, his passport confiscated, unable to leave the country.

These developments are outrageous, damaging, and scary. There is absolutely no doubt that Schram has the PhD he says he has. The university’s own website has a detailed record of it, including the date of defence and the names of examiners. Moreover, the man has published a book from his thesis, with Cambridge University Press no less.

The PNG Secretary of Higher Education has intervened and vouched publicly for the authenticity of Schram’s doctorate.

In the face of all this, the claim of the police seems to be reduced to the allegation that Schram had earlier (presumably at the time of appointment, back in 2012) produced a “fraudulently manufactured PhD certificate.” But why would someone fake a certificate for a genuine PhD? It makes no sense. The entire thing is a beat up.

The Unitech Council has disassociated itself from the recent police action, and stated that the police are acting on a complaint by the “former Council,” the one that preceded Schram’s appointment.

Cleaning up corruption
Once appointed, Schram started cleaning up the corruption and mismanagement he found. Some members of that “former Council” responded by trying to dismiss him, including by making the same allegation of false pretence with which he is currently charged.

In the end they got him barred from the country in March 2013. Schram was in exile for over a year, until, after an inquiry, he was re-admitted and returned in triumph to Unitech in April 2014 (see accounts here and here).

Schram’s arrest, some five years later, is outrageous because it is so transparently unfounded, and against the rule of law. Given that the matter has already been investigated and dismissed, how did Schram’s enemies enlist the police, and get them to arrest him? The arrest sends a message that you had better be careful not to make powerful enemies in PNG or, even if you act entirely legally, you might be arrested on the flimsiest and most baseless of grounds.

The episode is damaging not only because of the chilling effect it will have on domestic critics and reformers, but also because it will scare away academics and other foreigners who might otherwise be attracted to work in PNG, and take on positions of responsibility.

It follows the ban on entering PNG imposed on prominent Australian academic and businessperson Ross Garnaut in 2013.

It is especially damaging in the year of APEC, when the whole world is watching PNG.

Quick operation
Finally the episode is scary because the operation was mounted so quickly. Clearly when Schram was vice-chancellor of Unitech, he was afforded some protection from the groundless claims of fraud now being levelled against him. But Schram is no longer VC. He is in the country on a tourist visa after visiting Australia en route to Italy, his home country, on Unitech-paid tickets. His passport was confiscated the day he landed, and his arrest followed a few days later.

I urge all who support the rule of law and good governance in PNG — including the Australian Department of Foreign Affairs and the Australian Federal Police — to speak out for Dr Albert Schram, and to urge the police to drop the scurrilous charges against him.

Note: Schram’s tenure at Unitech ended earlier this year after a falling out with the current Council. One of the disputed claims was that, according to the Council, Schram failed to provide his “verified credentials” to the University. According to Schram, he did.

In any case, this allegation is quite different from the current charge of “obtaining employment by false pretence.” More generally, the Council’s statement of disassociation is consistent with the broader view that Schram’s departure from Unitech in no way provides a basis for the arrest last week.

Dr Albert Schram was a visiting fellow at the Australian National University in December 2017, and in 2016 presented a lecture here.

Professor Stephen Howes is the director of the Development Policy Centre and a professor of Economics at the Crawford School, Australian National University. This article was first published on the ANU’s Devpolicy Blog.