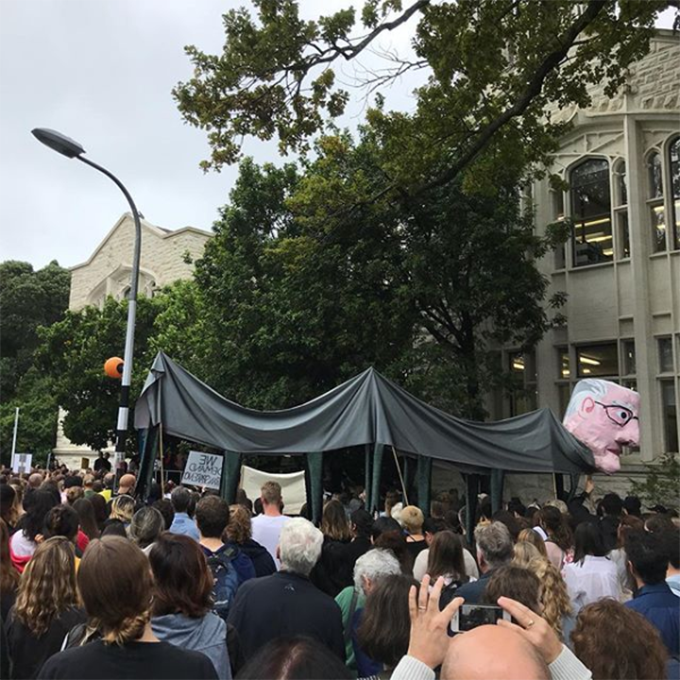 University of Auckland students march to protest against the potential closure of specialist libraries. Image: Pacstudio via Instagram

University of Auckland students rallied today against a plan to close several of the university’s specialist libraries, reports RNZ National.

The university’s architecture and planning, music and dance, and fine arts libraries have all been earmarked for closure.

Under the proposal, the specialist libraries would merge with the general library.

Students and staff worried about losing study space and access to vital resources and expert staff occupied the Fine Arts Library over the weekend to protest against its closure.

Students said today they had not been consulted about the plans.

Losing study space
They were worried about losing study space and access to vital resources and expert staff, as well as losing a sense of community with other students.

Auckland University Students’ Association president Anna Cusack said they wanted the consultation process halted, so students could have a say.

Consultation on the proposed closures ended today, but only affected staff have been involved in that process.

The students also planned to present a petition with thousands of signatures to vice-chancellor Stuart McCutcheon.

Gavin Ellis: As if the killing of Shireen Abu Akleh wasn’t enough…

Word from The Hill: Five seats to watch on Saturday night, and getting the hang of a hung parliament