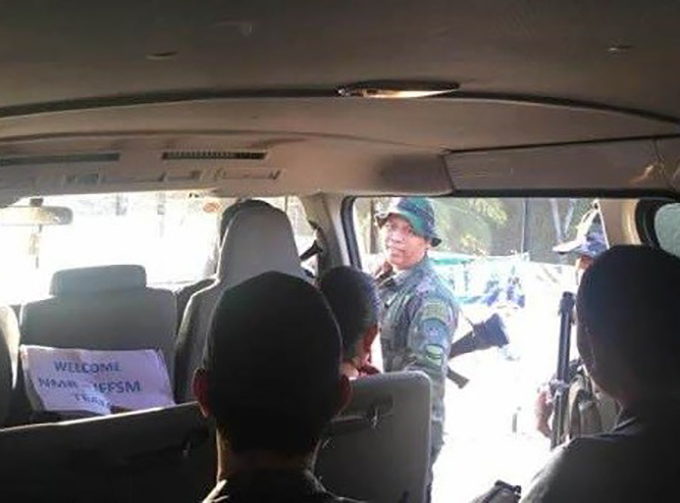 By Ronalyn V. Olea in Manila

Since their arrival at the airports in Davao City, Lagindinangan and Butuan City yesterday, all the way to highly-militarised peasant and Lumad communities in Southern Mindanao, Northern Mindanao and the Caraga region, members of the three-team mission have been subjected to different forms of harassment and intimidation.

Suspected soldiers took pictures of the Caraga team members and “welcomed” them with a banner that read “Just do it right” upon their arrival at the airport in Butuan City.

Anakpawis Representative Ariel Casilao said the military was behind the streamers.

“The AFP [Armed Forces of the Philippines] has no credibility in talking peace. We thus revise the slogan; instead it should read: AFP OUT NOW; WE WANT PEACE,” he said.

The Northern Mindanao mission team was blocked three times by police and military forces from the airport in Lagindingan to Cagayan de Oro.

From the city to the mission site in Patpat village in Malaybalay, the team was blocked eight more times.

“No wonder the military people don’t want us here.”

President Rodrigo Duterte placed the whole island under martial law on May 24, 2017, after an attack in Marawi City.

Seventy-one full battalions of the Armed Forces of the Philippines (AFP) are operating in Mindanao, of which 41 are focused on counterinsurgency operations.

The Kilusang Magbubukid ng Pilipinas (KMP) said at least 65 percent of the AFP’s combat troops are concentrated in Mindanao, where large-scale foreign plantations and mining concessions are to be found.

Human rights alliance Karapatan documented 126 victims of political killings as of December 2017, of whom 110 were farmers mostly coming from Mindanao.

In Southern Mindanao alone, 63 cases of extrajudicial killings have been recorded,

‘Bulldozing their way into vast lands’
“The unabated militarisation and Martial Law itself in Mindanao must be understood as a means for government, big landlords, oligarchs and multinational corporations to further bulldoze their way into the vast lands and resources of the island,” Mariano said.

The teams also reported to have been closely tailed by several vehicles from the airport to the orientation sites and to the villages where interviews with victims victims were to be held.

Undeterred, the teams were able to finally proceed to their respective mission areas.

“We managed to get past all the checkpoints so far after seemingly endless negotiations with the state forces but this is only the first day and the day is still long and so we must remain vigilant throughout the rest of the day and the entire duration of the three-day mission,” Mariano said.

Former congressmen Satur Ocampo and Fernando Hicap, and incumbent representatives of the Makabayan bloc, are among the delegates of the International Fact-Finding Mission to Defend Filipino Peasants’ Land and Human Rights Against Militarism and Plunder in Mindanao organised by KMP and the Mindanao for Civil Liberties.

In the past two weeks, a group of Lumad educators have visited New Zealand to talk about the human rights violations in education as part of the Save Our Schools programme.

Ronalyn V. Olea is a reporter for Butlalat.

Extreme heat and rain: thousands of weather stations show there’s now more of both, for longer

Waste not, want not: Morrison government’s $1b recycling plan must include avoiding waste in the first place

Here’s how the Victoria-NSW border closure will work – and how...

Waste not, want not: Morrison government’s $1b recycling plan must include...

It’s one thing to build war fighting capability, it’s another to...

Auteur vs computer: the frightening complexity of visual effects